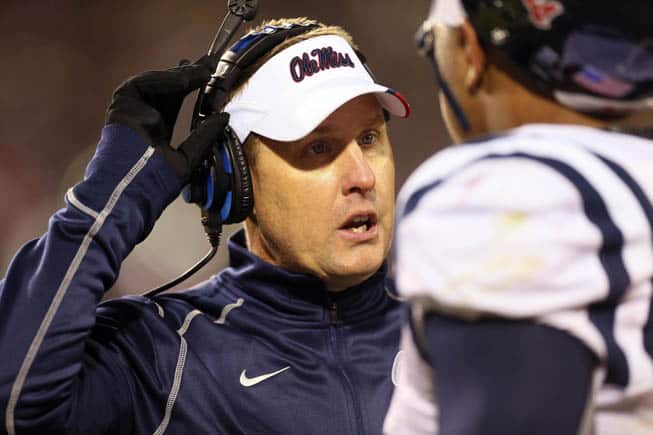 One of the hot topics today at the annual SEC Spring meetings is the scheduling of Football Championship Subdivision (FCS) teams.

FBS schools typically schedule FCS opponents for a few reasons — to ensure a home game without a return visit, to bring in additional revenue, and to notch a win for bowl eligibility.

Most SEC schools are scheduling FCS teams for the first two reasons. It’s primarily a money-making decision because an extra home game brings in $1-3 million in revenue, depending on the school. A few others need that extra win to qualify for a bowl.

But playing the SEC and other FBS schools helps the FCS teams add around $300-500K to their own coffers. Plus there’s always the chance that the little guy will rise up to defeat the big school, as 16 FCS schools did last season.

All of those factors have resulted in a divide over whether or not to continue scheduling FCS teams. Here’s a look at the position of each SEC school as stated at the Spring meetings this week (others will be added as necessary).

Nick Saban was the lone head coach that was for the SEC playing a nine-game conference football schedule. He has also proposed the power five conferences only play each other, meaning no games against the FCS and the other FBS conferences (AAC, C-USA, MAC, MWC, and Sun Belt).

Today Saban told reporters on playing FCS schools “We try not to do it now, but sometimes it’s all that we have left to schedule 12 games. It’s not by choice that we want to do it. The first people that need to be taken for consideration — who get no consideration — are the fans and people who support the program.”

Alabama hosts Western Carolina this season on Nov. 22, but future games against FCS teams have not been announced.

Head coach Will Muschamp said today that the Gators will “move forward” without scheduling FCS teams. Muschamp added that “I think more than anything that (the College Football Playoff) is part of it, and our fan base, as much as anything, wants to see better opponents.”

The last non-conference game that Florida currently has scheduled is Nov. 22, 2014 vs. Eastern Kentucky.

Georgia will continue to schedule FCS schools, according to comments made today by head coach Mark Richt. “I’m for doing it,” Richt said.

“What I’m learning is if we as BCS teams – or whatever you wanna call us these days – if we don’t have those games with the FCS schools a lot of them have a very difficult time making their budgets,” Richt said. “I think college football is too important at all levels to hurt them by setting criteria that would not allow you to play them.”

Georgia hosts Charleston Southern this season on Nov. 22 and is scheduled to open the 2015 season vs. Southern on Sept. 5.

Les Miles said Tuesday that he is in favor of continuing to play FCS opponents.

“Me coming up through the route of smaller school ball to this point, I know the value it adds to those programs (to play BCS schools),” Freeze said. “I find it hard to believe that one game like that, along with the conference schedule we play and one other game against a BCS conference opponent, would really hinder you if you perform well in those other games.”

Ole Miss is set to host Presbyterian this season, and has future games lined up against UT Martin in 2015 and Wofford in 2016.

Steve Spurrier would like to continue playing FCS teams, particularly if they are in-state.

“They are very appreciative when they get to come to our ballpark because they go home with a bunch of money,” Spurrier said. “And they always say, ‘Coach, we really appreciate you playing us because it really helps our budget throughout the year.’”

Kevin Sumlin echoed Saban’s statement that it is sometimes hard to schedule 12 games without an FCS team.

Clear message from #SEC (Saban, Sumlin, ADs): Sometimes FCS games will be inevitable because getting to 12 FBS games is difficult

The Aggies open the 2014 season vs. Lamar and then face Western Carolina in 2015. No other FCS opponents have been announced.

Honestly, who cares? Remember, you are the FAN, not the school commissioner or AD.

I am not calling you out DJ, rather calling out all these people who back up the school and their financial “reasons.” How does the money directly affect us as fans? As fans we should personally prefer better quality games.

I am also tired of hearing this whole “7 home games” spiel. No team NEEDS this many home games. They WANT this many home games. Financial reasons, competitive advantages, etc. I get it. There are SEVERAL teams that play 9 conference games, always schedule 1 or 2 P5 opponents, and only end up with 5-6 home games in a year, and they do JUST FINE.

I don’t understand fans who support when their school does this. What would YOU rather have, a home game against Eastern Kentucky or a road game against Oregon? It’s a pretty obvious and unanimous answer right there.

The AD and other members of the school have different agendas, but as fans we should all stick together and root for more of the better quality games, regardless of what happens on the money end. It’s better for college football and the fans of the game.

Also, lets say you are in the SEC or ACC with 8 conference games. You should have no problem scheduling 2 opponents from Power5 Conferences, and then be able to do WHATEVER YOU WANT with those final 2 games. Giving you 10 games against Power 5 competition.

If you are in the B10, B12, or PAC, with 9 conference games. You should have no problem scheduling 1 opponent from Power5 Conferences, and then be able to do WHATEVER YOU WANT with those final 2 games. Giving you 10 games against Power 5 competition.

You want 7 home games? Well you can still challenge yourself with my ideas above and STILL end up with 7 home games regardless. Not that difficult. It’s a shame teams are not even following these ideas and are still whining about “scheduling being too tough.”

Saban is such a jerk.

It’s actually not hard to not schedule FCS schools ..USC and UCLA haven’t played one since 1954 and 1952. Btw,, you wrongly tried to justify the nonsense of playing FCS schools by mentioning power conferences. There are plenty of non power opponents that would happy to play a power 5 conference on the road…ie…all the MAC(13), MWC(12), Sun Belt(10), C-USA(14), AAC(11 expanding to more)..that’s 60 schools. and then others like BYU, navy, army, NM state, Idaho…that’s 65 schools..they all need OOC games and all want to play 2 major conference opponents. Btw, it’s going to be easy for all but the SEC, ACC soon b/c the rest are all going to or have 9 game conf schedule, add in one major conf opponent and they only need to fill 2 spots…while the SEC has the most teams not playing a major OOC opponent and thus need 4 cream puffs. Btw, the SEC also plays the most FCS schools.

if you look at the 2014 schedules BBD you will clearly see that you are mistaken. The ACC plays more 1-AA schools that the SEC as they did in 2013.

expand the playoffs to conference champions! that will settle all disputes.

this discussions on fcs teams is a joke! that is regular season. conference champs should play each other in playoffs! the sec is scared! and acc is overrated!

One correction to one of the comments. A&M opens with South Carolina, not Lamar. Lamar is game number two.

I don’t buy the comment that the G5/Independent teams would love to schedule away only games vs. P5 schools. Some of them are okay–but if you look at BYU’s home schedule for example, they play big names on the road and have pretty crappy home schedules–teams like Michigan and Wisconsin in 2015 are 1 and done schedules. That can’t make the home season ticket holders very happy. PS: I’m not a P5 fan so I’m not justifying 7 home games–just saying that is the reason. FBS schools don’t like to schedule so many 1:done or 2:1 deals as it leaves home game gaps–thus the need for FCS games. I’ve love to see everyone do 6 home/6 away balanced schedules but I don’t see that happening any time soon.

I think that the NCAA should eliminate FCS and FBS status, and just make them both Division 1, and some schools will be placed in D2 if they don’t maintain a 15,000 attendance average for the year, or copy the model of FIFA where the lowest 8 attendance, and loosing schools drop down to D2, the the highest winning and attendance 8 move up each year, same would apply to D3 to D2?

,,,but for now until things change, let the FBS schedule FCS, or add a 13th game?

How come USC, UCLA and Notre Dame don’t have a problem not scheduling FCS twams?