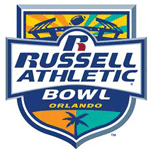 The 2012 Russell Athletic Bowl has been set for Friday, December 28 at 5:30 p.m. ET at the Florida Citrus Bowl in Orlando. The contest will feature teams from the ACC and Big East.

Future Russell Athletic Bowls could include higher profile teams as both Russell and FCS have committed to “boost the profile of the game.”

“As a brand whose heritage is so deeply rooted in college football, it is a natural fit for Russell Athletic to partner with FCSports for the Russell Athletic Bowl,” Gary Barfield, executive vice president, Russell Brands, LLC said in a statement. “We are also excited to extend our “Together We R” brand campaign in new ways and reach even more consumers through all the channels that FCSports provides as part of this relationship.”

I hate when bowl games are renamed after corporate sponsors. They should’ve kept the name Citrus Bowl and just tacked on “presented by Russell Athletic” afterwards, like the Rose Bowl does.

Believe this was originally (in 2003-04) the Tangerine Bowl (which is played in Citrus Bowl Stadium)? Can someone confirm/deny this?

The Tangerine Bowl is now the Capital One Bowl, which is also played at the Florida Citrus Bowl in Orlando.

The original Tangerine Bowl became the Citrus Bowl, but they brought it back some years ago, I think NC State and Texas Tech were one of the matchups when Kingsbury was a senior, and it was the Tangerine Bowl again for a couple years, then it got corporate. There were two different instances of the Tangerine Bowl, so you are both right.

Coroprate sponsers are the death of traditional college football