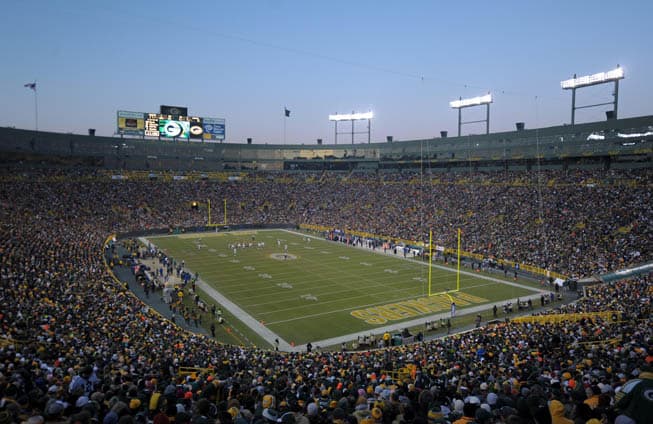 LSU vs. Wisconsin on The Frozen Tundra? There’s a small possibility that could happen as the Journal Sentinel reports that Wisconsin is looking to play a game at Lambeau Field with LSU as the opponent.

Wisconsin athletic director Barry Alvarez has been trying to upgrade his team’s non-conference schedules for the upcoming College Football Playoff. He accomplished that for the 2015 season by agreeing to a neutral-site game against Alabama at Cowboys Stadium in Arlington, Texas.

Now he’s trying to lure an SEC team up North to play in the home of the NFL’s Green Bay Packers. When and if that will happen remains to be seen, and UW declined the Journal Sentinel’s request for comment on Friday.

One thing that is for certain is that Lambeau Field is interested in hosting a college football game.

“It has come up from time to time and it is something that we are pursuing,” Green Bay director of public affairs Aaron Popkey told the Journal Sentinel. “But it hasn’t gotten to the point where there is anything on the books or where we’re ready to announce.

“We continue to look into it and will certainly explore those opportunities.”

Only two college football games have ever been played on The Frozen Tundra. In 1982 and 1983, Fordham faced Saint Norbert (WI) in Vince Lombardi Memorial football games to “raise money for the Lombardi Colon Clinic at the Medical College of Wisconsin.”

LSU has not commented on the rumored possibility of a game at Lambeau. It’s also not clear if the Tigers would even want to play a non-conference game that far North without a return game.

A closer venue that LSU might take advantage of in the future is Houston’s Reliant Stadium. It’s only four hours away and would likely give LSU the home field advantage over many, if not all, the Big Ten teams.

Regardless of where the game is played, LSU is in dire need of a prominent, BCS caliber non-conference opponent in 2014. The Tigers are currently scheduled to face ULM the second week of the season and later host Georgia Southern and New Mexico State.

LSU and Wisconsin’s only two previous meetings came in a home-and-home series back in 1971 and 1972. The Tigers were victorious in both games, winning 38-28 in Madison and 27-7 in Baton Rouge.

LSU athletic director Joe Alleva said over the weekend that the Tigers are in the “preliminary stages” of talks with Wisconsin.

“The novelty of playing at Lambeau is great, but there’s a whole lot of things to weigh,” Alleva said. “The financial things. We’ll see.”

Alleva also said the two schools discussed a neutral site series with one game at Lambeau Field and the other at Houston’s Reliant Stadium.

“A closer venue that LSU might take advantage of in the future is Houston’s Reliant Stadium. It’s only four hours away and would likely give LSU the home field advantage over many, if not all, the Big Ten teams.”

Yeah because the Superdome isn’t close or much a home field advantage at all.

The Superdome would essentially be a home game. We’re talking about playing out of state.

Ok, this absolutely needs to happen.

Dallas or Houston…. would be ideal Cowboys classic or chick fil a kickoff classic. Would the badgers consider those?

It might be both. A game at Lambeau followed by a return game at Reliant Stadium in Houston.

Just updated the story with that possibility.

If LSU doesn’t accept, theyre cowards. Especially with their joke of non conference opponents georgia southern, ULM and New Mexico State. Cancel 1 of those chumps and accept Wisconisn’s offer and schedule another game against a BCS opponent. They did this in 2011 against Oregon and West Virginia and went 13-0.

Did Les Miles get the memo that strength of schedule will matter in 2014 cause of the new playoff.?

LSU has options if Wisconsin doesn’t want to play LSU in Texas then they can go schedule Grand Valley St. to play in Wisconsin. Give LSU credit for scheduling some tough and exciting games out of conference. And LSU schedules tough despite the fact that it is the only program in the country to play Florida, Alabama, Auburn, Arkansas, and now Texas A & M every year.

LSU plays in Texas for several reasons: (1) Texas TV markets (2) Texas Recruiting (3) Texas Draw (4) Championship atmosphere. (5) money, money, money. LSU is the 4th most valuable college football program per Forbes Magazine. So the Tigers have a huge advantage when negotiating a contract to play at neutral site. Why would LSU take less money and give an opponent an advantage by playing in its home state? That would be brain dead scheduling. This game is in Houston at Reliant Stadium take it or leave it. LSU will find a more than adequate replacement for the game if yall aren’t interested.

If LSU is cowards, why is it they didn’t want to face the Tigers in the death dome? How many championships does Wisconsin have?
Zero!!!

Funny how Barry A is now trying to step up his non-conference schedule after all those years of weak schedules during his coaching tenure. In his sixteen years of coaching the Badgers he had seventeen non-conference games on the road and went 12-4-1. None of his road wins would be considered quality wins and the loses would have been considered potentially good wins if they could have won. The road loses and tie were; Colorado (’94), Stanford(t) (’95), Syracuse (’97), Cincinnati (’99) and Oregon (’01). Of the twelve wins it’s hard to get too excited about five wins against Hawaii & UNLV and teams they schedule during their opponents’ down years, but hey, I guess that what makes good scheduling and allows Mr. A to think he’s a genius.

I am not sure if an SEC team will come up here. But Boise State and BYU have a “play anyone, anywhere mentality” I would like to see either of those teams play us @ Lambeau or at The Camp,

BYU is already coming to Wisconsin a couple times in a 3-game series. Boise could be an interesting opponent for Lambeau as well. If UW wants these neutral games, I can bet that some of their current OOC setups will have to be adjusted. Namely Va Tech and Washington State.

I personally feel that LSU will come up to Green Bay if Wisconsin agrees to play a game at Reliant Stadium. I think if this falls through it could potentially open up the gates for further college games at Lambeau Field such as future Big Ten Championship games, if teams are willing to come to Wisconsin on a Saturday night in December haha. Plus players would have the experience of their lives if they got to play at Lambeau Field.

Bring em on, as an LSU fan, I wish we could play several teams in the Big 10, more wins for LSU that way. Seriously, these matchups should happen every weekend.