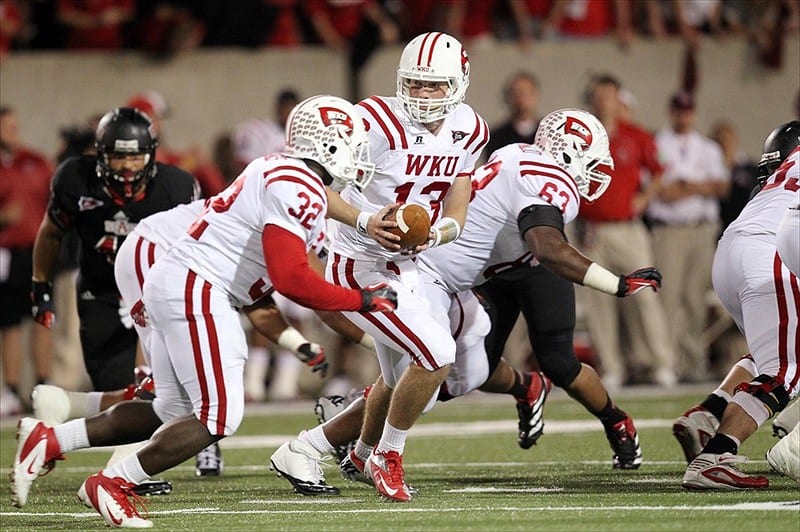 The Western Kentucky Hilltoppers have received and accepted an invitation to join Conference USA, the Bowling Green Daily News has reported.

WKU will join C-USA in all sports effective July 1, 2014. An official announcement could come as early as Monday.

The Hiltoppers, now led by head coach Bobby Petrino, have been a member of the Sun Belt since 2009. They are expected to replace Tulsa, who is reportedly heading to the Big East.

ESPN’s Brett McMurphy confirmed that WKU is Conference USA bound and also tweeted out two possible teams that might replace the Hilltoppers in the Sun Belt: James Madison and Liberty.

If one of those teams does move up from the FCS, they would join Appalachian State and Georgia Southern as first-year FBS teams in the Sun Belt in 2014.

Conference USA will now have 13 teams in 2014 when Western Kentucky and Old Dominion join and East Carolina, Tulane, and Tulsa depart. In 2015, C-USA will be at 14 after the addition of Charlotte.

So the “Big East” (America 12 or whatever it’s gonna be called) is like the CUSA Sr. while the new CUSA is like Sun Belt Sr. while the Sun Belt is now the land of misfits/FCS conference? It’s all too much!

The Mountain West is the WAC.

James Madison to the Sunbelt! All of I-AA pretty much is gonna get absorbed into I-A again. But that will happen after the BCS teams bolt the NCAA. d2, d3, and NAIA will remain the same.

This is my official request that Georgia State leave the SunBelt and get into either the C-USA or the “new”BigEast or even the MWC but please just get out of the SunBelt!

Yes they did! But GSU will surely get better because they are just a new team. I don’t want them to be stuck in the SunBelt – which is now just FCS part 2.

I’ll give you this. Trent Miles turned around Indiana State which at one point in the last decade was 1-50 at one point. To turn THEM around, you know he’s a keeper.

Trent Miles is a “real coach” and that is something that GSU has not had yet! Amazing that GSU had ever won any games at all with Bill Curry but that is all over now…

Why are we talking about GSU?

JMU and Liberty should join the Sun Belt.
It would be a step in the right direction for both Athletic programs.

It would also be neat to see Indiana State join the FBS.

I think Indiana State would hold their own in the MAC.

It would be a break0even for Indiana State in football; and a major drop for them in basketball.

Creighton is leaving the MVC, it will be similar to the MAC calibre. And a step-up in football MAC vs FCS< but you must know that.

It isnt that much of a step up from the top of FCS to the bottom of FBS. And even if Creighton is leaving; Wichita State, Northern Iowa, MO State (most years), Drake, Illinois State still are better the anyone in the MAC.

Also keep in mind that Indiana is one of the few states where basketball is as important as football.

with Appalachian State and Georgia Southern ineligible for the FCS championship, it looks like there is no stopping a 3-peat for NDSU.