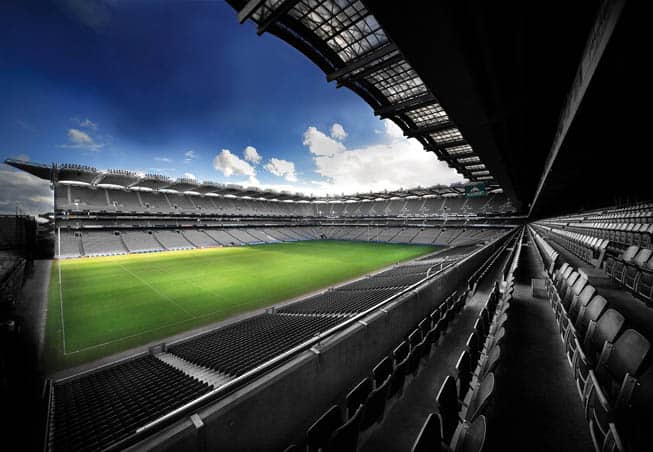 Penn State and UCF will meet at Croke Park in 2014.

The Penn State Nittany Lions and the UCF Knights will face off at Croke Park in Dublin, Ireland in 2014, according to a report today by The Irish Times.

Croke Park is to host an American football colleges fixture in the autumn of next year.

Details are expected in the next few days of the meeting of Penn State and the University of Central Florida.

Back in February, Penn State head coach Bill O’Brien said that they were looking into playing a future football game in Ireland.

“We are definitely looking into playing in Ireland, no question about it,” O’Brien said. “We’re working on an opponent and we’re working with the Big Ten on that. So that’s something that’s definitely in the works.”

Then in May, it was reported by The Orlando Sentinel that Penn State was close to finalizing the overseas game against the UCF Knights.

Penn State has two open dates on their 2014 football schedule – Oct. 4 and Oct. 18. However, it’s unlikely the game in Ireland will be played on either of those dates because they precede games against Michigan and Ohio State.

More than likely, the game will be the season-opener for both schools, which also means that previously scheduled non-conference games will have to be moved or postponed.

Penn State is currently slated to open the 2014 season at home vs. Temple on Aug. 30, while UCF is set to host Florida International on the same date.

Croke Park is the home of the Gaelic Athletic Association (GAA). Sports played at the stadium include hurling, camogie, Gaelic football, handball, and rounders.

The last American football game played at Croke Park was on July 27, 1997 between the Pittsburgh Steelers and the Chicago Bears of the NFL. Notre Dame and Navy met at Croke Park in the Shamrock Classic in 1996.

The Orlando Sentinel reports that an official announcement of the UCF-Penn State game in Ireland will be made on Sunday.

A report from The Score indicates that Croke Park could host American college football games in 2016 and 2018 as well. Teams thought to be under consideration include Alabama, Boston College, and of course, Notre Dame.

Why are teams choosing to play in Ireland? Is American football more popular there then in other European countries?

I hate these games being played in other countries. I like neutral site matchups in America like Arizona State/Notre Dame in Dallas and Alabama/Virginia Tech in Atlanta. But playing in Ireland seems just stupid!

It’s Penn State’s bowl game experience for 2014. They will have a good turnout.

Look at the coach names in this matchup… O’Brien vs O’Leary. You better believe that had something to do with it. Correct that this is PSU’s bowl experience and yes America Football is more popular in Ireland than other European countries.

I thought Germany was the big (relatively speaking) American football country. By the end NFL Europe was almost entirely in that country.

Game could also be December 6 with PSU ineligible for B10 title game and UCF in an 11 team conference. But am thinking UCF may host BYU Nov 29 with UCF-PSU a season opener.

Golf trip and Penn State football in same week in Ireland, I am excited…