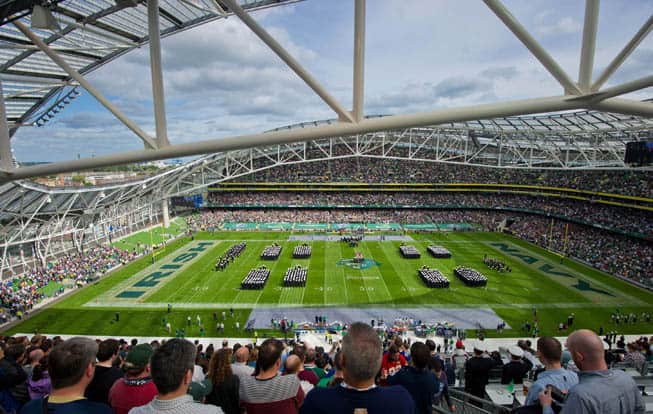 Penn State and UCF may open the 2014 season in Dublin, Ireland, the Orlando Sentinel has reported.

The Nittany Lions and Knights agreed to a home-and-home football series back in January, with Penn State hosting UCF on Sept. 14, 2013 and the second game to be played in either 2014 or 2015.

Now it appears that the two schools are working on playing the second game of that series in Ireland next season.

“We have talked to them about being a potential opponent, but we are far from an agreement,” said David Hansen, UCF senior associate athletics director for internal operations. “Logistically, it’s not easy.”

Bright House Sports Network also confirmed the talks and received a similar response to a request for comment.

“We don’t have an agreement with Penn State so I am not able to comment,” Hansen said in an email to BHSN. “We will certainly release a statement once/if we get there with PSU.”

If the game is finalized, it would likely be played on Saturday, Aug. 30 at Aviva Stadium and labeled the Emerald Isle Classic. Notre Dame beat Navy last year 50-10 in the first American football game played at the new stadium.

Back in February, Penn State head coach Bill O’Brien acknowledged that they were actively seeking a game in Ireland.

“We are definitely looking into playing in Ireland, no question about it,” O’Brien said. “We’re working on an opponent and we’re working with the Big Ten on that. So that’s something that’s definitely in the works.”

After receiving a four-year postseason ban last year, the Penn State Nittany Lions began looking at ways to upgrade their future football schedules. The intent is to give their current players a “bowl” experience on some level during the regular season.

If the two schools are to meet next year in Ireland, they will both have some shuffling to do on their 2014 schedules. UCF will need to postpone or cancel their season-opener against Florida International (Aug. 30) and may want the following week off to rest from the extended travel.

Penn State could have two games to move. The Nittany Lions are currently slated to open the 2014 season with back-to-back home games against Temple (Aug. 30) and Akron (Sept. 6).