Ranking the ACC’s Cross-Division Schedules in 2016 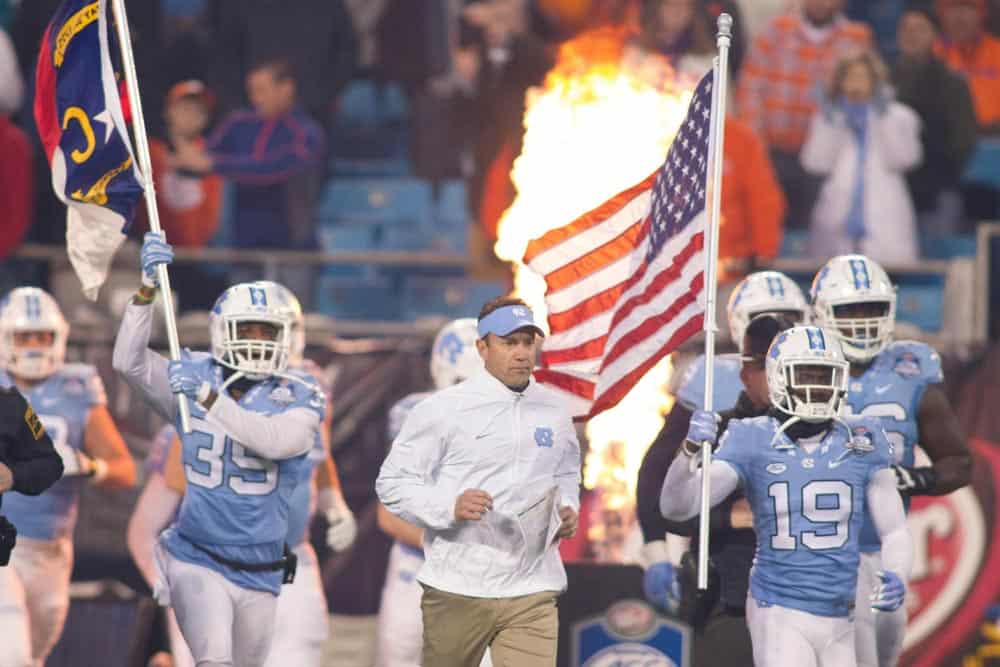 Even within a conference, strength of schedule is not an apples-to-apples comparison.

Members play different calibers of non-conference opponents, hail from different divisions and then play different teams from across the league in the opposite division.

It’s these “other” opponents that can very quietly make a big difference in the outcome of a season, swinging the pendulum one way or the other.

In the ACC’s case, the scheduling of these cross-division foes is on a rotating basis, a scheme that is complicated and involves a long number of years. It’s a lot like marriage.

2016 Cross-Division Opponents: Duke and at Virginia

Potentially a preseason Top 25 team, Louisville will have a better chance of staying ranked by drawing the Blue Devils and Cavaliers. Though Duke did go 8-5 last season, neither it nor Virginia is among Phil Steele’s Top 40 or even Top 57 teams in 2016.

Steele has the Cardinals at No. 21 in his rankings and predicts a No. 3 finish in the top-heavy Atlantic. Alternatively, he has Duke and Virginia at No. 6 and No. 7 respectively in the Coastal.

2016 Cross-Division Opponents: at Duke and Virginia

Tied with Louisville is Wake Forest, which gets Duke on the road and Virginia at home, the opposite from the Cardinals’ schedule.

Though the Demon Deacons have dropped four straight to the Blue Devils, they’ve managed to win two consecutive games over the Cavaliers. Regardless, they get the easiest combo from the Atlantic.

What’s tricky about evaluating Boston College’s slate is Georgia Tech, a team that went 11-3 in 2014 (capturing the ACC Atlantic) before plummeting to 3-9 last season. Despite success being so recent, Steele predicts the Yellow Jackets will struggle again, to the tune of a No. 5 finish in the division.

That leaves Virginia Tech, a team with a new coach coming off a 7-6 season. Steele has them at No. 43, meaning they won’t likely win any titles, but should be bowl eligible again.

Clemson lost to Georgia Tech as recently as 2014, but that was the season the Yellow Jackets won 11 games. Before that, it was 2011 in Atlanta.

Pitt’s a team that posted a solid 8-5 mark in 2015 and returns eight starters to both sides of the ball. Like the Hokies, they may not be vying for a division title, but they should play in a bowl game. Steele mentions them at No. 35.

Virginia Tech/Pitt is a stronger package than Georgia Tech/Pitt. That’s why Syracuse’s slate ranks No. 3 in the Atlantic.

The Orange haven’t played the Hokies since 2003, when both teams where in the Big East. They’ve met Pitt consecutively since 1955 and have lost 10 of the last 11.

NC State and Florida State are both hamstringed by playing what, at least in the preseason, looks to be the class of the Atlantic.

Steele has Miami at No. 19 and North Carolina at No. 27, while other sources (like ESPN) have the Tar Heels squarely in the Top 20.

On top of that, the two teams combined for a 19-8 record last season. That’s not only the best cross-division opponent combo in the Atlantic in 2016, it’s the best in the entire ACC.

Florida State is deadlocked with NC State at No. 1 because neither North Carolina nor Miami has been significantly better than the other at home over the last three seasons.

The Tar Heels are 15-5 since 2013 in Chapel Hill vs. the Hurricanes 16-4 mark in Coral Gables. That fact makes it impossible to say whether visiting North Carolina or Miami is more difficult.

Boston College and Syracuse combined for a 7-17 mark last season. It represents not only the lowest output of any cross-division opponent combo in the Coastal, it’s the lowest in the entire ACC.

This gives the Hokies, on paper, the easiest cross-division schedule in the conference—an under-the-radar advantage for first-year head coach Justin Fuente.

Virginia and Duke both draw Louisville and Wake Forest in 2016-the No. 3 team from the Atlantic combined with one of the stragglers.

The Cardinals are No. 21 in Steele’s Top 40, while the Demon Deacons have suffered seven-consecutive losing seasons.

Duke’s slate gets the edge over Virginia’s because it travels to the more difficult of the two shared opponents (Louisville) and welcomes the weaker at home (Wake Forest).

The next four teams all have either Florida State or Clemson, both who should be in Top 5 coming in to the season. Steele has the Seminoles at No. 1 and the Tigers at No. 5 while other sources, like ESPN, have the two schools in the opposite order but still in the Top 5.

It amounts to Georgia Tech, Pitt, Miami and North Carolina all playing with a serious one-game disadvantage vs. the rest of the Coastal.

Georgia Tech gets Boston College (3-8 in 2015) in Ireland along with a visit from Clemson. What puts the Yellow Jackets’ schedule a step behind Pitt’s is hosting the top-ranked Tigers as opposed to visiting them.

Georgia Tech’s last win over a Top 5 team came in 2009, when it knocked off No. 4 Virginia Tech on the way to an ACC title.

2016 Cross-Division Opponents: at Clemson and Syracuse

The Panthers travel to Clemson—where they’ve never played—and then host Syracuse—a team they’ve beaten 10 of the last 11 times. The Orange were a 4-8 squad a year ago.

Pitt hasn’t beaten a Top 5 opponent since 2007, when it won at No. 2 West Virginia to close out the season.

Miami’s difficulty rating is only marginally greater than Pitt’s. The Hurricanes host Florida State in Coral Gables and then travel to NC State, a team that went 7-6 last season.

It comes down to the combination of the Seminoles and Wolfpack being stronger than Clemson-Syracuse.

Miami’s last win over a Top 5 was in 2005 when it toppled No. 2 Virginia Tech in Blacksburg.

At the top of the heap is North Carolina, a team that should be either just in or just out of the Top 25 when the season kicks off.

Remaining in the rankings and hitting double-digits again (it posted an 11-3 in 2015) won’t be easy given the Oct. 1 road trip to Tallahassee to face Florida State. That on top of the season opener in Atlanta vs. Georgia.