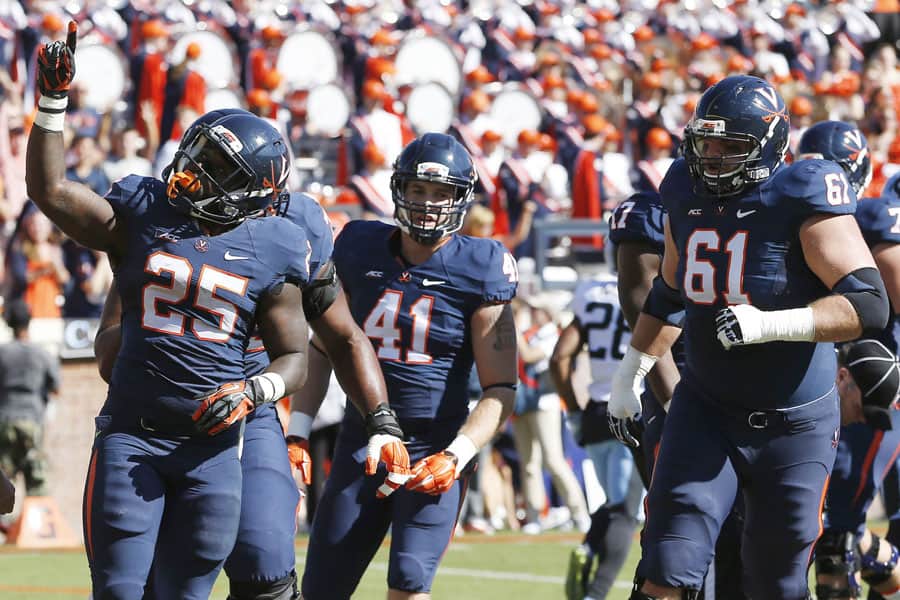 After ranking the SEC and Big Ten’s 2015 non-conference schedules, this week we’ll turn to the ACC.

What’s altered the ACC’s non-league scheduling is the inclusion of Notre Dame as a quasi-member. For programs that didn’t regularly schedule a Power-Five opponent out of ACC play, a rotating date with the Irish means a decidedly more difficult non-conference slate. For those teams that regularly include a Power foe, it doubled the billing.

That’s especially true for ACC members with annual rivalry games such as Clemson (vs. South Carolina) and Florida State (vs. Florida).

What sets the ACC apart from the SEC and Big Ten in 2015 is non-conference away games. Where the SEC and Big Ten combine for one member with two road games (Vanderbilt travels to Middle Tennessee and Houston), the ACC has five members with a pair of road trips.

Following are the ACC non-league schedules, bottom to top. The rankings mean that teams like NC State and Duke will have much easier road to the postseason than programs like Virginia and Louisville.

NC State is the only ACC club that won’t play a Power-Five team out of conference in 2015. The only winning team from 2014 the Wolfpack will face is FCS Eastern Kentucky, who finished 9-4. On the flip side, they are one of the five ACC teams set to play two away games.

The last time NC State scheduled a Power-Five opponent in the regular season was in 2012 when it opened up with a loss to Tennessee in Atlanta, Ga. The last time it won such a game was in was in 2003 when it knocked off Texas Tech 49-21.

Even though Northwestern is the best opponent on Duke’s non-ACC slate, the most successful is FCS North Carolina Central. At 7-5, the Eagles are the only winning foe the Blue Devils will face out of conference.

Duke hasn’t played two non-ACC road games since 2009, when it traveled to Army and Kansas in back-to-back September dates.

Syracuse will play two bowl eligible teams from 2014, each of who narrowly lost their postseason games: Central Michigan fell 49-48 to Western Kentucky in the Bahamas, while LSU lost 31-28 to Notre Dame in the Music City.

Other than that its 1-11 FCS Rhode Island and a road trip to 4-8 South Florida.

The real intrigue is LSU’s trek to New York to face the Orange. The two teams have only met twice previously, the 1965 Sugar Bowl and the 1989 Hall of Fame Bowl.

Even though Boston College is one of only two ACC teams to play two FCS squads, the balance of their non-conference schedule is vs. 11-3 Northern Illinois and 8-5 Notre Dame at Fenway Park.

That’s good enough to keep it out of the bottom three.

The last time Boston College played more than one FCS opponent was in 1984, when it faced both Western Carolina and Holy Cross on the way to a 10-3 finish. That season ended with a 45-28 win over Houston in the Cotton Bowl and a No. 5 ranking in the final AP.

What gives the Seminoles’ non-ACC slate the edge over Syracuse and Boston College is the fact that it gets Florida on the road in Gainesville.

Beyond that, FSU draws a Texas State team that went 7-5 and a Chattanooga team that finished 10-3, advancing to the quarterfinals of the FCS playoffs.

The Seminoles’ 2015 non-conference slate is considerably easier than last year’s, when they got the Gators at home but also squared off with Oklahoma State in Arlington and Notre Dame in Tallahassee.

The Hurricanes face four non-conference foes that combine to rank No. 3 in winning percentage in the ACC. FCS Bethune-Cookman, Nebraska and Cincinnati all pegged nine-win campaigns in 2014, while FAU had nine losses.

What hurts Miami, despite its two true road games, it that two of its best opponents hail from the FCS and the American Athletic.

What’s exciting is the Hurricanes’ home date with Nebraska. The Huskers haven’t visited Miami for a regular-season game since the series between the two schools first began in 1951.

Even though Wake Forest plays the group of non-ACC foes with the worst combined record from last season (19-29 or 39.5%), it does face two Power-Fives in Indiana and Notre Dame.

That and the two true road games (at Army and at Notre Dame) make up for the fact that three of Wake’s opponents combined for a total of nine wins in 2014.

The last time the Demon Deacons scheduled two Power-Fives out of conference was in 2012 when it closed the season with back-to-back losses at No. 3 Notre Dame and vs. Vanderbilt.

North Carolina is the only ACC squad that won’t play a game against a non-Power, FBS opponent, instead scheduling two Power-Fives and two FCS teams.

What lessens the blow for the Tar Heels is that only one of its Power opponents broke .500 last year (South Carolina went 7-6).

The last time North Carolina played two FCS foes in the same season was in 2009 when it beat The Citadel and Georgia Southern on its way to an 8-5 finish.

While Pitt’s game at Iowa might not look scary on the surface, keep in mind that the Panthers haven’t beaten Iowa since 2008 and haven’t won in Iowa City since 1951.

The last time Pitt played two Power Fives in one season was in 2012, when the Panthers were still in the Big East and hosted Virginia Tech from the ACC and traveled to Notre Dame on their way to a 6-7 finish.

Also included in that slate was an opening game vs. FCS Youngstown State, a contest Pitt lost 31-17.

What holds Virginia Tech’s non-ACC slate back is the second of its two Power-Five foes, Purdue, a team that went 3-9 in 2014 and hasn’t posted a winning record since 2011.

What helps it, other than playing defending national champ Ohio State (at home in Blacksburg), is its road trip to East Carolina. While the Pirates beat the Hokies 28-21 in 2014, keep in mind that before that they dropped four straight to Tech by an average of 12 points.

Clemson’s 2015 non-ACC slate is a tale of two sets of opponents: One it has won eight straight against (the Tigers have never lost to App State and last fell to Wofford in 1933) and the other it’s only beaten twice in the last seven tries (before beating South Carolina in 2014 the Tigers dropped five straight and haven’t beaten Notre Dame since 1979).

The Tigers are one of only two SEC teams who will play all of their non-conference games vs. opponents with winning records in 2014.

Clemson has had two non-ACC, Power-Fives consistently on its slate since 2009 when it scheduled Middle Tennessee (Sun Belt), No. 15 TCU (Mountain West), FCS Coastal Carolina and South Carolina (SEC).

Georgia Tech is ranked just higher than Clemson because it will travel to South Bend to play the Irish rather than face them at home.

The last time Georgia Tech played two Power-Fives outside of conference play was in was in 2011 when they added Kansas to its regular date with Georgia.

What gives Louisville a paper-thin edge over Georgia Tech, other than facing two SEC teams, is its game with Houston, a program that is 16-10 over the last two seasons and beat Pitt in last season’s Armed Forces Bowl.

Add in new head coach Tom Herman, Urban Meyer’s OC at Ohio State since 2012, and you get the picture. Houston is no non-conference patsy.

Louisville hasn’t played two SEC opponents in the regular season since 1976 when it, as an independent, had road trips to Mississippi State and No. 18 Alabama. The Cardinals lost both games and finished the season 4-7.

Virginia’s quest to become bowl eligible for the first time since 2011 will be ham-stringed by a doozy of a non-conference schedule.

Kicking things off will be a road trip to UCLA. The Cavaliers have never visited the Bruins and have never won a game on the West Coast.

Next up, it’s Notre Dame, a team Virginia has only faced once, in the 1989 season opener, a game it lost 36-13. Though FCS William & Mary shouldn’t be a problem, keep in mind that the Cavaliers lost to the Tribe as recently as 2009.

Boise State? That’s a different matter entirely. The Broncos are fresh off of a 38-30 win over No. 19 Arizona in the Fiesta Bowl, sealing a 12-2 finish and a No. 16 rank in the final AP poll.

It means the Cavaliers are set to face four foes who combined for a 37-15 (71%) record last season, the highest mark in the ACC.

Pretty well written, and technically Kansas was GA Tech’s previous power 5 outside of Georgia, but I like to think BYU might as well be a Power 5 type team, who Tech was swept by in 2012 and 2013.

BYU is not even lose to a P5. They are a decent midmajor. They play more than halftheir games vs G5’s and their record against P5’s is below 0.500.

BYU is a Power 5 team. Every conference besides the SEC considers them to be a P5 team

I definitely believe the top 5 ranked schedules by the ACC are legit. I also think that Syracuses schedule could have gotten them ranked a little higher, but maybe because any schedule looks difficult against a bad Syracuse team. I am very disappointed in FSUs schedule. I believe the ACC as a whole has to go even more above and beyond with their OOC games due simply to the number of bad teams in the 14 team conference. I believe the ACC and PAC12 are very comparable conferences except that the ACC has two more bad teams than the PAC12. As a whole I am not impressed. I am fine with any conferences scheduling one or two FCS teams a year as long and if you play two you better be playing two strong P5s. Being an ACC fan I am pretty disappointed in the teams ranked 7-14 and especially disappointed in FSU considering the ACC relies on them being successful and being successful against quality opponents. Yall have fun with this one. Go Tigers Baby. Glad we will always be at the top of this list. We too deep!

Most of the BYU vs P5 games have been played on the road. If more of those games were played in Provo I suspect BYU would have won more of those games. And Notre Dame not following through on their scheduling commitment did not help BYU.

BYU isn’t any worse than these P5 programs:

So which P5 non-conference programs have Mississippi State, Kansas State and Baylor scheduled for 2015-16?

Damn, everyone one of them is playing an FCS school. The SEC and ACC just will not budge. Glad the B1G was National Champs this year.