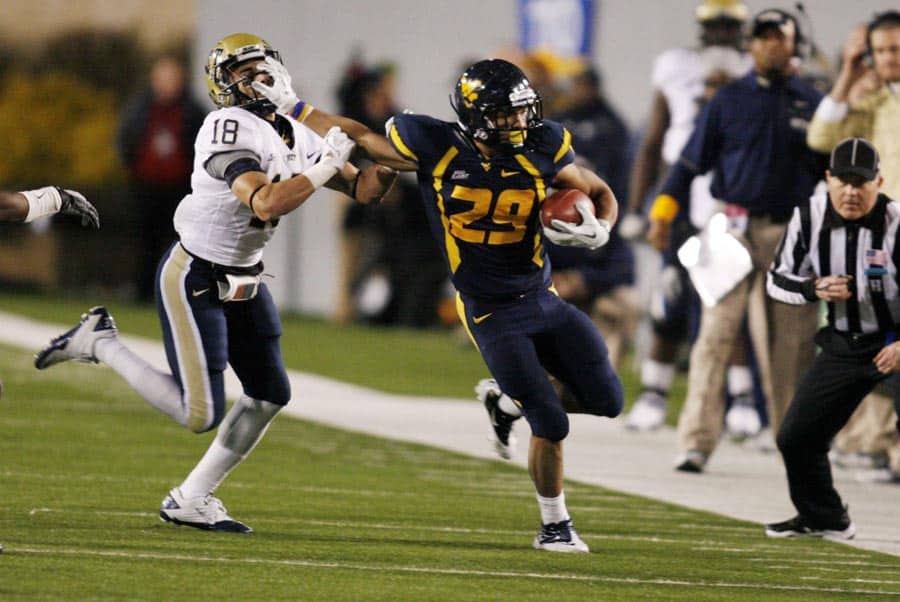 The Pittsburgh Panthers and the West Virginia Mountaineers have announced the renewal of the Backyard Brawl football series for 2022 through 2025.

The return of the Backyard Brawl is certainly something that Pitt and WVU fans and most college football fans are grateful to see. The Mountaineers won the last meeting in 2011, but still trail 61-40-3 in the series that began in 1895.

“Pitt and West Virginia have a long and storied rivalry that dates back to the 19th century,” Pitt athletic director Scott Barnes said. “I’ve learned there is a lot of passion surrounding this game and we’re pleased to be able to rekindle that history.

“We also continue to have productive conversations with Penn State,” Barnes added. “Although Penn State’s scheduling opportunities are limited in the early part of the 2020s, we are hopeful we will be able to expand upon our current four-year agreement that begins next year.

“An unfortunate byproduct of conference realignment has been the interruption of numerous traditional rivalries across the country. Everyone wins when two great series like Pitt-Penn State and Pitt-West Virginia are renewed, especially the student-athletes and fans of college football.”

“I think this is a very exciting announcement for all of college football. We all know how conference realignment ended some long-standing rivalries, which have made the sport so special. Today, we are able to bring back one of the oldest rivalries in college football,” WVU Director of Athletics Shane Lyons said.

In addition to Pitt, West Virginia plays at Virginia Tech in 2022, at Penn State in 2023, and vs. Penn State in 2024. WVU has several other Power Five non-conference games lined up for the future, including Missouri (2016/19) and Tennessee (2018; at Charlotte) from the SEC.

I applaud this. Other FBS ADs need to take notes. Fans want to see these kinds of games, not Rutgers at Michigan.

I don’t mind Rutgers and Michigan -_-

Josh – Rutgers has to play Michigan… They are in the same conference and Division.

Fans will be happy to see this, let the couches burn!

A good move by both teams. It would be even better if somehow they could make it an end of year game, rivalry week. That would probably require another ACC team to find another OOC game to schedule for rivalry week.

West Virginia plays Liberty on Saturday, and the Mountaineers have Youngstown State on the schedule next in 2016. After that there are no future games planned against FCS opponents.

Any word on a possible 2019 “neutral field” WV-FlaSt game in Jacksonville? With WV already having Mizzo and NC St on the 2019 schedule, that would be something.

So now it might be Cal vs Hawaii in Australia. Tricky logistics for sure.

Correct me if I’m wrong, but ACC teams can still schedule 4 OOC opponents in the long run, right? If so, there’s a good chance that Pitt could play PSU and WVU annually for years and years to come. If Penn State decides to make Pitt a permanent annual opponent, I believe that starting in 2020, the game should be played Thanksgiving Weekend, and Penn State might have to alter their usual series rotation (hosting the team on even years, traveling to the team on odd years; compared to the current travel to team on even years, host the team on odd years). But this all depends on any long term decisions as far as future opponents and scheduling alterations.

Yes, ACC teams can schedule 4 OOC games minus their Notre Dame requirements per year. However, Penn State is only able to schedule 3 OOC games per year. This is where the problem lies… Penn State will play 5 away conference games every year, therefore that year, they must play 3 OOC Home games. That leaves only 1 Home-and-Home option available at a time.

It is my personal belief that a school like Penn State would be limiting itself by playing Pitt every year for the next 100 years; this would require Penn State to forgo playing scheduling any other Home-and-Home deals, unless they are OK with only playing 5 true home games one season (unlikely!)

This is Fantastic! Now if only Texas and Texas A&M will schedule one another too? How about Nebraska and Oklahoma, Missouri and Kansas, or even Temple and Pitt? Conference Expansion, and raiding other Conferences have destroyed a lot of great rivalries! ….If you look back to 1982, Pitt could have saved us all from this mess had they agreed to join an all sports Eastern Conference with Penn State, WVU, Syracuse, Boston College, Florida State, Miami, Virginia Tech, Rutgers and Temple, but instead joined the Big East in all sports except football which they remained an Independent, as did the others. …Penn State would go on to join The Big 10, Florida State the ACC, and that left the other 8 Schools which joined the new Big East Football Conference, and we all now what happened after that? …i am a big Pittsburgh Panther fan, and I like WVU and Penn State, and Temple as well, but if Pitt’s Ad at the time wasn’t such a Penn State hater, we would have a Great Eastern Football Conference today, and yes, maybe there would have been still Conference Expansion, but I doubt Penn State would have left a Powerful Eastern Conference where they would have won a lot of Championships, and possible National Championships for the Big 10?

As a Mountaineer fan I’d much rather resume a series with VaTech. Their fans have pulses.

I love Pitt scheduling WVU and Penn State Rivalry games again. Good Job to the AD of all three schools for scheduling up and giving fans the games they want to see. It could be even better if they played Thanksgiving week like ACC games like Florida – Florida ST, Clemson – South Carolina, Georgia – Georgia Tech Louisville – Kentucky