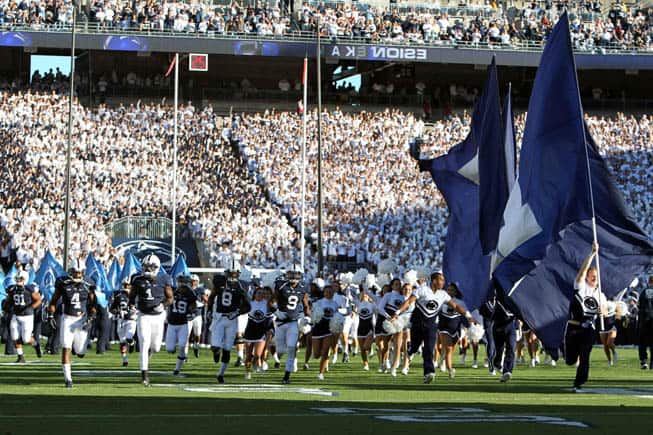 The Penn State Nittany Lions and the West Virginia Mountaineers have scheduled a home-and-home football series for 2023 and 2024, the two schools jointly announced today.

“We are excited to announce this football series with West Virginia,” Penn State Director of Athletics Dave Joyner said. “The renewal of our West Virginia rivalry is a series our alumni and fans have wanted to see on our future schedules. I am appreciative of the efforts of Oliver Luck in getting our two schools together again. As we prepare to move to a nine-game Big Ten schedule (2016), I am very pleased that we have been to able to schedule old rivals like West Virginia and Pitt and add Virginia Tech in upcoming years.”

Penn State and West Virginia first met in 1904 and have played 59 times. The Nittany Lions have dominated the overall series, leading 48-9-2. The two schools met in 46 consecutive seasons between 1947 and 1992, but the series has been dormant ever since.

“I know how exciting it was to play in Beaver Stadium and to have the Nittany Lions come to Morgantown,” West Virginia Director of Athletics Oliver Luck said.” I think the renewal of this series will be great for the fan bases of the two schools as both locations provide an easy drive. I want to thank Athletic Director Dave Joyner and Coach Bill O’Brien for their efforts in getting this series renewed. Both Universities have rich traditions and history, and to be able to revive the memories and the fun is what makes college football so special.”

Penn State now has two of their three non-conference games for the 2023 season. The Nittany Lions also host Virginia Tech. The match-up with WVU is the first scheduled game for 2024, and is the first for the Mountaineers in both seasons.

Back in May, WVU athletic director Oliver Luck said that he wanted to get Pitt, Virginia Tech, Virginia, and Penn State back on their future football schedules. Luck is now 2-for-4 after adding Penn State today and Virginia Tech in July.

He’s almost at 3-for-4, as the Bluefield Daily Telegraph reported in July that the Mountaineers and Pittsburgh are close to reviving the Backyard Brawl.

Awesome. I still recall Paterno yelling at the cops in Morgantown back in 1988 after Major Harris waxed PSU 51-30. It was 41-8 at halftime.

But can these games match the juice (and generate the revenue) of Penn State-Indiana or West Virginia-Iowa State? Those are the annual tilts that really get these fanbases churned.

Agreed. Indiana-Penn State and Iowa State-West Virginia matchups are awesome. Seriously though, WVU and Penn State will be fun, too bad PSU did not have to play WVU when the Mountaineers were so successful in the early and mid 2000’s or the series would not be so lopsided!

That’s 11 years out. The players that would play in that game are in elementary school right now. Let’s see if it actually happens.

Really? A schedule that is 10 to 11 years in the future??? A lot can happen between now and then. Maybe it is clear to someone else but I’m surprised there would be an announcement about the 2023 and 2024 Football Series! Kitty)