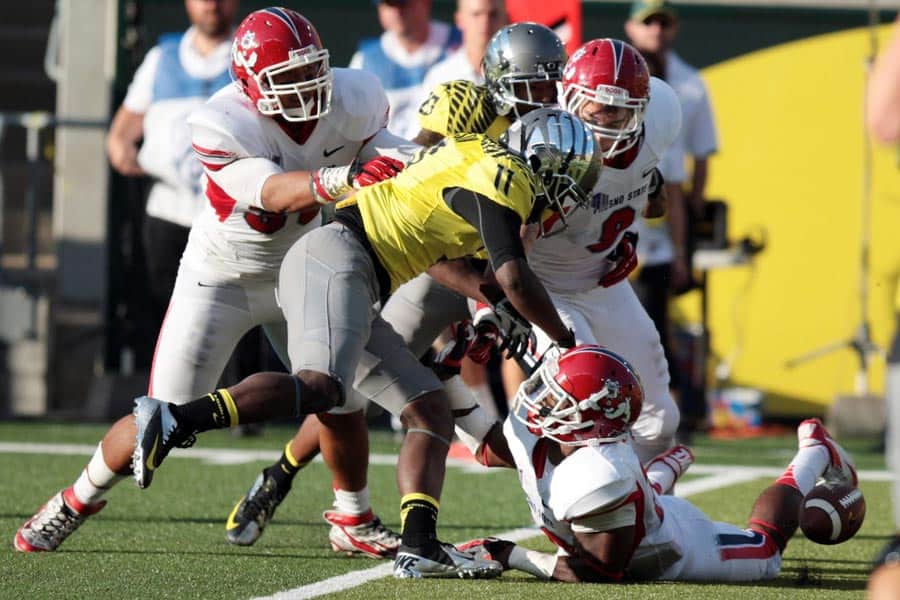 The Oregon Ducks have added the Fresno State Bulldogs to their 2021 football schedule, FBSchedules.com has learned.

Oregon will host Fresno State to open the season on Sept. 4, 2021 at Autzen Stadium in Eugene. The Ducks will pay the Bulldogs a $950,000 guarantee for the game, according to a copy of the contract obtained from the University of Oregon via a public records request.

Oregon and Fresno State have met nine times on the gridiron, most recently in 2012 in Eugene. The Ducks have won seven straight games in the series and now lead 7-2.

The Ducks now have two of their three non-conference games scheduled for the 2021 season. The week after hosting Fresno State, Oregon is slated to visit Ohio State (Sept. 11).

Fresno State also has two non-conference games set in 2021. The Bulldogs are also scheduled to visit the Rose Bowl to take on UCLA on Sept. 18.

Fresno State continues to add high profile money games to aid their underfunded athletic department. In the past , when Fresno State was consistently competitive and sold out most of their home games, they were attractive enough to make a series like this a home & home agreement. Those days, at least for the next several years are gone. In the next several years, Fresno has one and done away games with Washington, Alabama, UCLA and now Oregon.

Anytime, Anyone, Anywhere – most of the time that meant playing away for Fresno in the 2000’s. Fresno never had a 1 for 1 home & home agreement with Oregon or any similar caliber school Dave, at the very best it would have been 2 for 1. Fresno has to take these games and hopefully the dogs will be competitive again to actually have a chance when they meet.