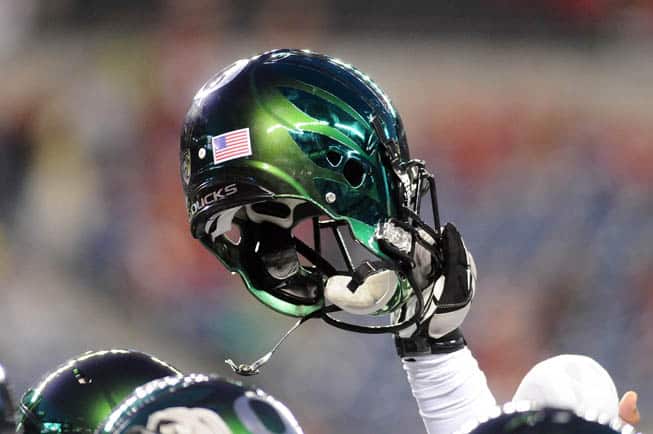 The Oregon Ducks have added a trio of FCS teams to their future football schedules, the school announced yesterday.

Oregon will host the South Dakota Coyotes at Autzen Stadium in Eugene on Aug. 30, 2014. It will be the first ever meeting between the two schools.

Oregon has also scheduled two other first-time FCS opponents. The Ducks will host the UC Davis Aggies on Sept. 3, 2016 and the Southern Utah Thunderbirds on Sept. 2, 2017.

The FCS additions mean that Oregon only needs one more non-conference opponent to complete their schedules in 2016 and 2017. Oregon also hosts Virginia in 2016 and travels to Wyoming in 2017.

With the addition of three FCS schools, one as far out as 2017, it’s apparent that the Pac-12 is not going to back away from scheduling lower level opponents. Currently, the Big Ten remains the only conference that has made any kind of statement regarding ending or scaling down games against the FCS.

While most FCS schools can hurt a team’s strength of schedule, some of the stronger ones can actually help. A look at the 2012 Sagarin Ratings shows several FCS schools in the Top 100.

If a computer ranking is used in some fashion for the upcoming College Football Playoff, FCS schools can still be scheduled as long as it’s done wisely.

Go ahead, Ducks. Put a bunch of icing on your cake before a real team smashes you.

Almost all the FBS teams schedule an FCS team or, in some cases, an equivalent or worse FBS team. What’s the big deal?

Well, at least it’s a bit tougher than Oregon St. scheduling Nicholls State two years in a row … but not by much!

Oregon, Do you have enough lipstick for all these pigs?

Oh, they’re just padding the schedule for when the NCAA hits them with sanctions, lol!

When did Oregon join the SEC?

hahaha
7 in a Row including Auburn’s victory over Oregon

7 -1 dont forget you lost a championship game too..which means you were gifted one trophy. love the when did they join the sec ,absolutely love it. quit your bitching sec, play somebody midseason!

embarrassing as I really hope the strength of schedule component penalizes you for playing an FCS opponent. I guess Oregon does not want to be like UCLA and USC who have never played an FCS opponent.

Oregon has beat them both the past seasons…lol, if they have the talent it doesn’t matter who they play, UCLA and USC are programs that are falling and decreasing while Oregon is increasing, so shut the [email protected]&? up, and have a nice day(:

Some of those FBS teams have been ranked lower than some of the FCS teams the other teams have been playing and Oregon has been winning the head to head games lately too. So, what is your point here?

Oh. So the College Football Playoff will still be a beauty pageant? Surprise.

40 years ago, it was OREGON looking for payday games. During the early 70’s, Oregon played Oklahoma, Nebraska & Michigan…..each team was #1 in the country when Oregon showed up…..times have changed! GO DUCKS!

I’m a SHSU alum, and we finished the season ranked #63 according to Sagarin – higher than NC State, Arkansas, Minnesota, Purdue, Cal, Auburn, USF, Virginia, UConn, etc. The author is right that it can be beneficial to schedule the right FCS teams, but look at all of the teams that have been bitten in the ass by it (Michigan, VaTech, Minnesota, etc). Schedule NDSU, SHSU, EWU, or Montana/State and it could help boost the SOS over a school like Eastern Michigan, UMass, NMSU, Idaho, etc.

Texas A & M cancels with Oregon backing out of a signed contract for a home and home agreement….by the way Texas A & M used the SEC as an excuse to (a)void their contract obligations…Kansas State did the same last year only to be trapped and trounced in their bowl meeting….and there are other supposed big name schools that have done the same. Point is no one in the Oregon program is running and hiding anywhere but having had coaching experience it is a daunting task putting any level schedule together…try just meeting for coffee with three of your friends and agreeing on a time and place…Oregon has become a top tier school and have earned it, Don’t understand the haters…I know all you can see is green.

Amazing how this article gives little (other than casual references to Mich.State and Virginia) attention to the teams Oregon DOES have on its schedule. Those teams include the aforementioned Spartans and Cavaliers, as well as SEC’s Tennessee Volunteers (scheduled when there was every reason to expect they would be a powerhouse), Texas A&M, and Ohio State. The only current gap in the schedule was brought about by a team asking out of the contract (perhaps Georgia).

True, the Ducks have very transparently committed to a schedule of one powerhouse, one midlevel team (although scheduling Virginia as a midlevel is pretty ballsy), and one FCS school. Some may quibble with the FCS team, but remember that the PAC is still committed to a nine-game conference schedule.

The true focus should be on the 8-game conference schedule pussies, such as the SEC, some of whom are guilty either of scheduling two FCS schools in a season or at least scheduling all non-conference games in-state (see Florida). Until there is consistency in conference scheduling, it makes sense for the Pac schools to pad one game of the schedule with an FCS team.

The Ducks have established their formula for being considered a power much as have the traditional powerhouses. At least schedule an FCS opponent that has one a championship at some point in the current century or a perrenial FCS power. Until the Ducks prove they’re for real with an early season challenge game, they are just tuning up for their lately soft conference schedule (no USC no ASU). The team got exposed for aiming too far ahead and too high, got to win one game at a time. They have put themselves in the bullseye with their recent consistent high rankings. Think they are rightfully concerned to take on a team that can compete with them early in the season. Michigan State 3rd game in for 2014 at Autzen, I believe MSU is a senior laden team this year so will lose many players from this year’s conferencence champion team.

MSU is for real and returns many key players including a very good QB! Once again they are overlooked in the Big 10 which is a mistake!! UM, OSU and UW get all the press but they have had a great 5 seasons in a row! They play um ,osu, nebraska in East Lansing so this could be their year. Dantonio is irked by this and if they take Oregon watch out.. Just dont give up the quick TDs and they can take a great oregon team i.e. 2 scores in 2 minutes even though State contorls the game. One of the top early games so dont miss it as should be very entertaing!!

For those talking shit about Oregon’s schedule; Oregon had also scheduled Kansas State for an Home and home for 2013, 2014. And Georgia for 2015, 2016 also called their home and home off. Guess who else is thinking about canceling their home and home with Oregon? Texas AM (2018,2019)… So yeah, Oregon chooses quality opponents far of in advance and when they decide to crap out in the last minutes (a year or 2 before they are scheduled to meet) it becomes very challenging for Oregon to make quick schedule invites to “cupcakes” to try and have a full schedule. At least Tennessee had the balls to keep their promise of a home and home (and that scheduled meeting between the 2 was made when Tennessee was a prominent power in the SEC mid 2000’s).