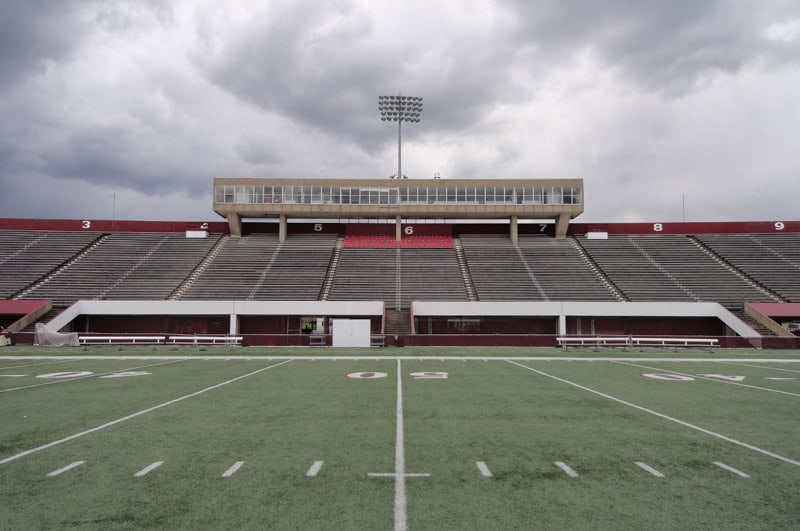 UMass will host ODU at McGuirk Stadium in 2017.

The Old Dominion Monarchs and the UMass Minutemen have scheduled a home-and-home football series for the 2016 and 2017 seasons.

Harry Minium of The Virginian-Pilot first reported news of the series yesterday, which was later confirmed by an ODU release.

Old Dominion will host UMass in the first game of the series on Oct. 1, 2016 at Foreman Field at S.B. Ballard Stadium in Norfolk. The Monarchs will then travel to face the Minutemen at McGuirk Stadium in Amherst on Sept. 9, 2017.

“We continue to add to our non-league schedule in the future and the UMass series is a great addition to our schedule. We played them in 2011 when we were both members of the CAA and FCS,” ODU Head Coach Bobby Wilder said. “Now that we are both FBS members this will give both programs a competitive non-league game that should be exciting for the players and the fans.”

The two schools met one time previously when both were members of the Colonial Athletic Association in the FCS. In that contest in 2011, ODU upset 20th-ranked UMass 48-33.

Old Dominion now has three non-conference games scheduled for 2016 and two for 2017. In addition to the games with UMass, ODU travels to Appalachian State and NC State in 2016 and Virginia Tech in 2017.

UMass now has five games scheduled for 2016 and three for 2017. The Minutemen will likely be an FBS Independent in 2016 after opting to leave the Mid-American Conference after the 2015 season.

In 2016, UMass is slated to host UConn and Rhode Island and travel to Florida and Boston College. In 2017, they will visit Temple and Indiana.

Umass is going to be seriously hurting for home games starting in 2016.Can’t see them being Division 1-A much longer, with other teams to follow. No TV money and no home games that are attractive for any network.

UMass is committed to 1-A football, there’s no going back to 1-AA in the plan. They’ll likely have to be independent for 1 year if lucky, 2 years if not, but they’re actively looking for another conference. If everything falls their way (and I mean a lot would have to go right) they wouldn’t be independent at all. They’ll fill that schedule for 2016 and 2017 if they need to.

What conference can they go to? Sub Belt has already said n0. C-USA will be at 14 teams when Charlotte becomes a full member. The American will be at 12 when Navy joins. The just got booted out of the MAC. MWC will simply not incur the travel costs. And Boston College, which shares the geographic footprint has, it’s own trouble drawing. And last year they barely beat the required NCAA attendance minimum to maintain 1-A status. If there isn’t a plan to return to 1-AA, or drop football altogether as a scholarship sport, the school should start one.

The American will be at 12 for football, but only 11 full members; Navy’s joining for football only. UMass didn’t get “booted out” of the MAC, they elected to leave because it makes no sense to become a full member of a conference that they have no geographic ties to. They joined the MAC to get the football program a foothold in 1-A, if the MAC’s feelings are hurt that UMass wouldn’t hurt every other sport they have just to keep football there that’s too bad.

UMass could very easily become a full member of the American, and I believe they would do so in a heartbeat if given the opportunity. That would mean leaving the A-10 for basketball, which is the one thing they don’t want to do, but it makes sense in every capacity. The basketball program would still be in a good league. Just because it would put the American at an odd number of football schools doesn’t mean it wouldn’t happen.

UMass’ issue drawing is rooted in the fact that they moved the games to Foxborough when they made the jump. Now they had to based on stadium requirements, and the Kraft family was kind enough to let them do it rent-free, but they team will do much better for themselves when every home game they play is back on campus. They won’t have any trouble meeting the attendance requirements once that happens. They are finally playing games back on campus this season, and while there are still a few future games scheduled for Gillette (which is unfortunate) they have made necessary improvements to the facilities on campus and the games are finally coming back. If you get into a better conference with more recognizable opponents, that helps address the issue as well.

And I’d say it’s for the best that UMass won’t be in the Sun Belt, which is one conference it makes less sense to be in that the MAC in terms of other sports and travel. Drop football as a scholarship sport? They’ve had a football program at UMass 1879. That’s older than Notre Dame’s football program, among others. They aren’t dropping football, nor are they going back to 1-AA. If it means playing a season or two as an independent, that’s what they’ll do, but there’s no going back for the program, not at this stage.

“The bottom line is we’re committed to FBS-level football. Whether it’s now or down the road, we’re going to find a way to work out a suitable situation for ourselves.” That’s a quite from AD John McCutcheon in May of this year. They’re in it for the duration.

M.A.T., you seem to be posting about your Minutemen through football beer goggles. Wake up and smell the roses here, because the flowers are dying.

Why is UMass scheduling so heavily in September? I would expect an indepenent to want to fill October and November.

I’m just guessing, but I think that they may at this point be holding out a sliver of hope that they’ll be able to move into a different conference for 2016, so they would have conference games to play late in the season. There’s like a 0.05% chance of that actually happening, but once they reach a set date on the calendar where they decide they’ll have to be independent, they’ll start filling in the schedule.

Your full of revisionist history as far as the MAC goes and wishful thinking with everything else. UConn will block them from joining the American and they will add no new TV market to the American even if UConn wouldn’t block them. Sun Belt already said no, and C-USA has no room. UMass’s best hope is to outlast the Georgia Southern’s and Charlotte’s of the world and hope C-USA drops below 12 when University President’s start to do their fiduciary duty and drop a football program that they cannot afford.in the days of billion dollar TV contracts.

The Sun Belt is holding out for Liberty or James Madison to join 1-A as opposed to taking an existing 1-A program in a new market. The Sun Belt took Idaho and New Mexico State but said no to UMass.. That says a lot about the perceived heath and future of the UMass program. Talk to me in 4 years and we’ll see who is right. I have nothing against UMass, but there are bunches of programs that should not have made the jump to 1-A and UMass is one of them.

Really? UConn would “block them”? Does UConn run the American? Why would UConn turn down the opportunity to have a real rivalry within their new conference? Because that’s exactly what UMass would be, in both football and basketball (less so on the 2nd of course). And that is of course not taking into account that UConn would jump to the ACC if they ever got the chance, so stopping UMass from joining the American (which they wouldn’t do) makes no sense. UMass football isn’t going anywhere. I won’t bother talking to you in 4 years or 4 minutes. The MAC wanted UMass as full members and UMass said no, with good reason.

If you think teams don’t block other teams to protect a territory then you simply don’t understand the egos and economics of football. Right now UConn is the second football program in the New England area behind BC (which isn’t saying much) and easily the top basketball program. Their incentive to allow UMass into the American is zero. And your assertion that UMass and UConn would be natural rivals is once again wishful thinking. These are the reasons that Pitt will never be in the Big Ten and Florida State will never be in the SEC, The exceptions, like Virginia Tech to the ACC, were all politically motivated at the State government level. There is no government entity to bring pressure on UConn to allow UMass to be a rival, and there is absolutely no incentive for the American to share their already small TV money with another team. They get their Championship Game with Navy as the 12th football member.

Schools block each other all the time. The University of Detroit Mercy was blocking Oakland University from joining the Horizon League for years until Butler left and the Horizon had to find replacement members.

And I did forget ti add this, although you are technically correct that UMass opted to not accept the MACs ultimatum to join in all sports or leave, a clause in their contract that was triggered by Temple leaving, the MAC enforced it knowing full well that UMass would never accept it. It was more of the “resign or be fired” scenario then “we really, really want you in all sports” scenario. If UMass was drawing even 25K to home games the MAC would have been happy to keep UMass.

This is a longshot, but Cinci and UConn are both trying to get out of the AAC and into the BigXII or (an even longer shot) if FSU bails the ACC for the BigXii, into their slot, But unless the AAC finds themself at 11 teams; UMass is homeless. Even if my longshot scenario plays out, the AAC may prefer UTSA to UMass.. Although Boston (#7) is a larger TV market than San Antonio (#37), UTSA has a better longterm upside. I expect UMass to tread water as an Indie and to sign a long term deal with Army as the campuses are roughly 3 hours apart.

The P5 are not expanding for awhile. And that means BYU, Cincy, and UConn are on the outside looking in for the next seven or eight years. And that means there are no options in FBS for UMass into the next decade. UMass will not last that long in FBS. But rather than admit a terrible mistake, I predict they will simply drop FB altogether by 2020. Actually 2017 is my guess for the last season. Two years as Indy is all they can hope to survive.

Well UMASS just released its football schedule for the next several years.
Games against BYU, Hawaii, Army, Troy, Appalacian State, Tennessee, and Charlotte. This does not include games that are already on the schedule.
UMASS will not be leaving the FBS any time soon.

Umass is not dead in SunBelt . Troy and other sunbelt teams are in the future at UMass.

If they could close out games people wouldn’t be so hard on them. They had Colorado, but blew a big lead. They should have beaten Vanderbilt…. Penn St. was a blow up.. but.. if they beat Colorado and Vandy, although they aren’t that great, it would have been big for their program.

As a Massachusetts resident I really want to see UMass compete at the highest level. We need a Public University to represent out state and keep what talent we have in-state. Boston College does not represent us. They are an over 40 grand a year Jesuit school that is full of out of state kids and only has an alumni fan-base. Maybe UMass 10 years from now can be competitive??if not, at least we have our team like other states do in the South and Midwest.