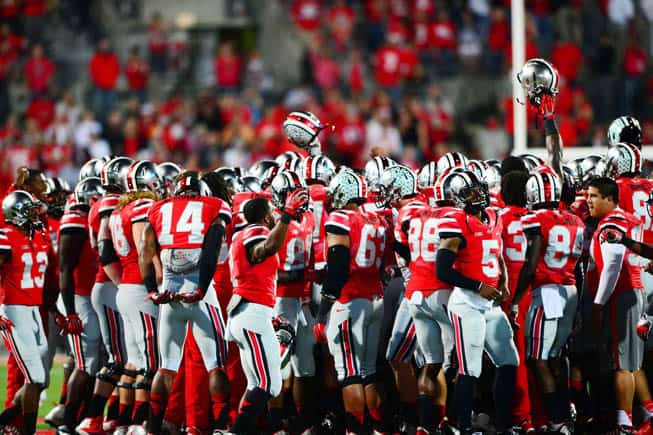 The Ohio State Buckeyes have completed their 2015 football schedule with the addition of games against Hawaii and Western Michigan, the school announced today.

Ohio State and Virginia Tech also confirmed that they will open the 2015 season at Lane Stadium in Blacksburg on Labor Day, Monday, Sept. 7. The game will be broadcast nationally by ABC or ESPN in prime-time.

Back in August, Virginia Tech athletic director Jim Weaver revealed on the radio that they would play Ohio State on Labor Day. The game was previously scheduled for Sept. 19, 2015.

Ohio State will host Hawaii at Ohio Stadium on Sept. 12, 2015. The game will be the first ever meeting between the two schools.

The Buckeyes also added a home game against Western Michigan on Sept. 26 and announced a new date for their contest vs. Northern Illinois: Sept. 19.

The 2015 season will be the last eight-game conference schedule for the Big Ten.

Ohio State also announced today that they have moved their Sept. 8, 2018 home game against Cincinnati to Sept. 7, 2019. The Bearcats agreed to the move.

I also like the fact that Rutgers and Maryland have joined the Big Ten. This “MIGHT” bring some competition to this conference for once, and maybe even spoil an upset against Ohio State, Wisconsin, Michigan, or Michigan State.

Go Big. 12 we see the Buckeyes next year it’s all about my Sooners

my B1G should put michigan in the west and ohio state in the east but still protect the ohio st. vs michigan rivalry! the B1G east is going to be to competitive and the west is going to be too weak! also, i still love the leaders and legends division which is something they should keep!

mich ste had 2 bye weeks in a row last year and we still beat them mich havn”t beat mich ste what 5 years.

i hope the B1 G reconsiders and keep the names leaders and legends divisions!

I think its funny how everyone talks the big ten down. We have a combined 37 national championships. Only conference with more is the ivy league lol. The sec has less and is overrated. Yea they have the most ranked teams this year simply bc the media has best it into everuones heads that they play tougher schedules.the big ten doesnt get the credit deservef. PERIOD.

Hey douche…..what has the Big Ten done lately? What a joke of a conference. Yea. SEC overrated….LOL 7 titles in a row.

And one of those games was against Ohio State, and Florida all butt slaughtered them!

Hey sissy….we beat the so-called big boys of the SEC….Alaslamma and even the PAC 12 Whoregons. Grow a pair and maybe you can be on the same field as we are….So you again when you’re back in the top 10…..What?

Really big ten. Oh state has played 1 repeat one top ten team in season since 2009. You wonder why the country doesn’t respect you. It’s nice to see the conference starting to schedule games “decent games” out of conference. Hope those games are against teams not having bad years and u might earn some respect. Touch the sky “it’s not 1950 anymore. We used to go up there and beat oh st and michigan. They never would come down here. Urban Meyer might win you a championship but you’ll need more jails, never mind he gets them off.

Ohio State has a hard time getting teams to play a home and away series. They had a commitment with Georia, but then Georgia backed out. Then Vanderbutt stepped up to play, then they canceled. When Ohio State asked Florida, they said No Thank You. And as for the SEC winning all the titles, strange when ESPN took over the TV contract from the NCAA, all the SEC teams are preseason ranked in the top 25. Oh yeah, ESPN has had the contract for the NCAA for 7 years, what a surprise!

osu also scheduled USC, Texas, and wasu, and others at their peak this past decade. With Oklahoma, Texas, and Oregon among others on the board for this decade, is say it’s time to calm down on the ooc complaints while Alabama and Auburn are sril playing FCS schools in November.

Once bama loses in the sec championship, osu will b #2 and destroy fsu… thanks hav a nice day

Oops, you sorta missed the mark on this one. See you next year !!

A good ole beat down is what happens to Ohio State. It’s time to start peeling of the “cute” stickers on the helmet.

I like the fact OSU ,mich, mich st and penn st will play each other every year. It’s similar to the sec setup where 1 side is stronger than the other. Plus Wisconsin Nebraska Iowa and n western is a rivalry matchup

This schedule sucks in my opinion. We need to schedule a team from a REAL “power conference”. UCLA would be good, or Auburn, or Oklahoma.
To SEC fans: I can’t deny that your conference is the best right now, but some of you need to stop flaming. It’s childish.

The reason the SEC has been winning is because the have the lowest graduation rate of the Big 5 Conferences. Basically, the players play football. They rarely go to class. Therefore, they have more time to practice and get ready to play football on Saturdays. Remember the SEC was the last conference to allow African American football players. All they have done is move young black males from the cotton field to the football field.

Still can’t believe that the buckeye fan’s think that they play football? Big 10 has been down for too long now and what year was it when u’all played USC and Texas?

I think Michigan. Should be in the west. That would balance the big 10

BUCKEYES RULE…IN THE TOP 10 EVERY YEAR ..EXCEPT WHEN THE media RAN TRESSEL. Out. Full of talent. Every year …100.000 plus fans at every home game…..SEC….SUCK EGG COLLEGES…BAHAHA…OHIO STATE. BUCKEYES… JUST WATCH AND C KIDS..

Where do I find what Channel Ohio State University game will be on each week?

Will be updated as TV networks are announced.