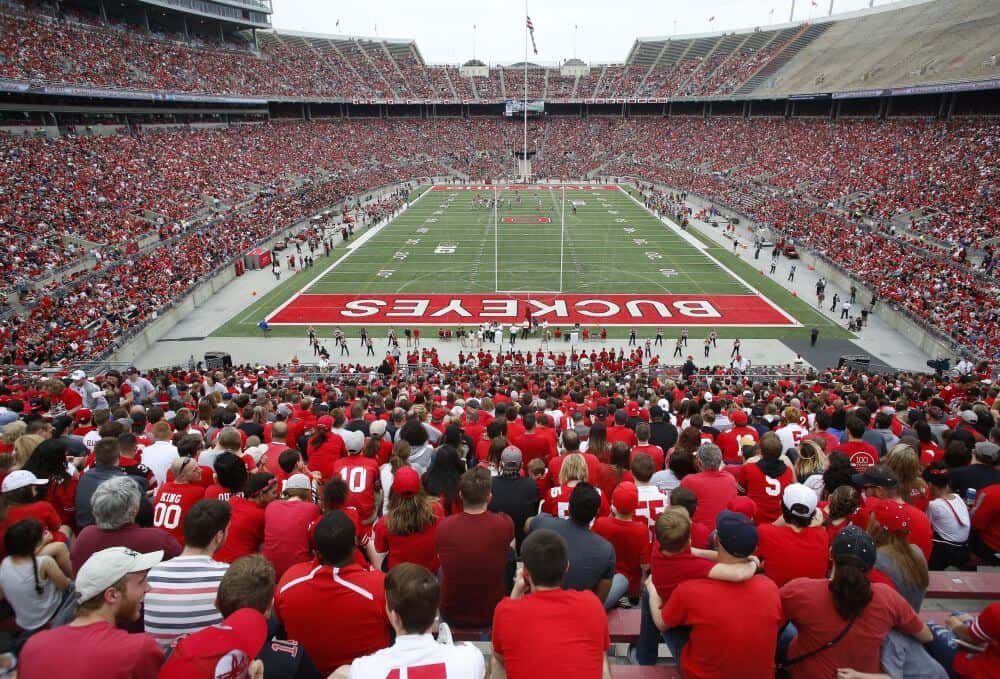 First, Ohio State announced Thursday a change for its planned 2018-19 home-and-home series with TCU. That series will be replaced by a single game vs. the Horned Frogs to be played on Sept. 15, 2018 at AT&T Stadium in Arlington, Texas.

Per a copy of the game contract, both Ohio State and TCU will receive guarantees of $5 million for playing in the neutral-site game.

The release also announced a home-and-home series with Pac-12 opponent Washington. Those showdowns will take place Sept. 14, 2024 at Seattle’s Husky Stadium, and Sept. 13, 2025 at Ohio Stadium.

Also noted is the addition of home games with Bowling Green and Tulsa. Ohio State will host the Falcons on Sept. 5, 2020 and the Golden Hurricane on Sept. 18, 2021.

So did Ohio St gain a B1G waiver for 2019 to not play a OOC game against a P5? Or is Cincinnati on the B1G whitelist? In 2019, five of the fourteen B1G programs appear to not be playing an OOC game versus a P5 opponent.

Must be nice to ink these contracts and just back out of them with such frequency. I get that they moved from 8 to 9 conference games recently, but man, they back out of a lot of contracts…

Most of the time, there’s a “swap” of sorts in the works. TCU & OSU get a lot more $ by playing just one in JerryWorld, and clearly TCU was able to pick up Purdue H&H to take the place of one of the OSU matches. It’s win-win.

The loss for OSU is their 2019 non-conference schedule is pathetic (this coming from an Ohio State fan). I like what I see all other years but I don’t know why competitively you would replace TCU with Miami, OH. Hopefully they replace Cincinnati with someone worthwhile.

“Hopefully they replace Cincinnati with someone worthwhile.”

WIth widespread reports that Michigan is trying to get out of the 2020-2021 series with Washington-the 2024 home game with Ohio State would be Washington’s first decent OOC home game against a P5 school since 2010 (Nebraska). Sorry, Illinois and pitiful Rutgers (truly an embarassment for the Big Ten) you have no appeal.

How bout a game with Norte dame.is Ohio state scared?

Why would they be afraid of ND? They have not lost to them in the last 50 years.

Gene Smith has, for years tried to get ND on the schedule and the Iris repeatedly said no. Who’s scared?

Besides, a little research would clearly show the ND/OSU series in 22/23. The same years OSU also plays Texas.