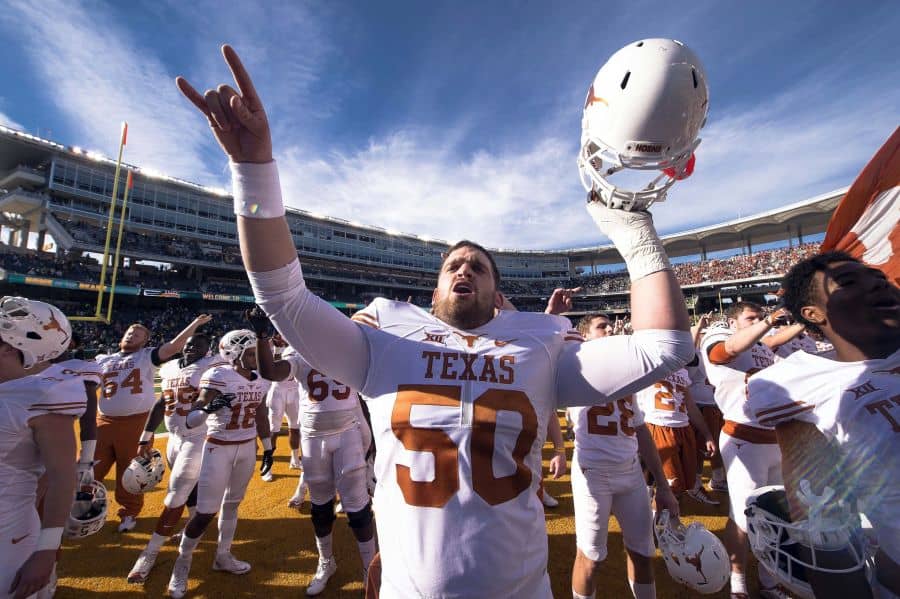 Notre Dame and Texas will now face off on Sunday, September 4, Texas’ sports information department reported in a Friday release.

This will allow the game to be broadcast during an exclusive national timeslot. No announcement has been made on the carrier or game time, though the release states the game will kick off in the evening. ESPN’s Brett McMurphy reports, however, that the game will be carried by ESPN/ABC.

“When you hear Texas Longhorns and Notre Dame Fighting Irish it grabs everyone’s attention,” Texas Men’s Athletics Director Mike Perrin stated in the release. “That’s a historic sporting event that fans worldwide want to see. This schedule provides a wonderful opportunity to play the game in an exclusive window so everyone can see it. We discussed it quite a bit and took into account all of the factors in making the decision. Now we are thrilled to take part in this showcase opportunity for both of the schools, our teams and passionate fans. In a weekend full of key college football match-ups across the country, these great institutions and storied programs will meet at Darrell K Royal-Texas Memorial Stadium in a stand-alone spot on the college football calendar. That is tremendously exciting for all of us involved.”

Notre Dame has nine wins in the 11 contests between the two schools, including a 38-3 victory to open the 2015 season. The last meeting at DKR occurred 20 years ago, which the Irish won 27-24.

Texas head coach Charlie Strong also commented in the release, saying, “Having worked in both programs, I have a deep appreciation of the great football pride, tradition and passion at Texas and Notre Dame. This is a game we’re obviously very excited about and really looking forward to. I think moving it to Sunday with no NFL games when it can really be in the spotlight will make it that much more special.”

“A game of the magnitude of Notre Dame-Texas, played on the opening weekend of the college football season, deserves a special place on the Labor Day sports calendar. With this move we have secured that place and by doing so are providing a greater opportunity for fans of college football to enjoy what is sure to be another great game in a classic rivalry that dates back to 1913,” said Notre Dame vice president and James E. Rohr director of athletics Jack Swarbrick in a separate release.

Exactly, they need to fill that day up with games. This would also allow for people that live in a crowded market to go to multiple games (especially Texas).

Yes. keep the game off of Fox. That network is nothing but bad news for the Irish. Now all we need is the USC game to air on ABC and ESPN 2 on Saturday Night Football in reverse mirror with Michigan-Ohio State and ND will have its first Fox-free schedule in 4 years.

I started a petition last year to keep Notre Dame road games against Pac-12 and Big 12 teams exclusive to the ESPN family of networks. So far I have no other supporters. Please sign this petition.

So far I have no other supporters.

If this gets good ratings, I wonder if this catch on? Maybe a Sunday doubleheader?

Of course it will, a week before NFL starts & we got this: Sept. 3 Alabama-USC (Arlington); Sept. 4 Notre Dame at Texas; Sept. 5 FSU-Ole Miss (Orlando)
Fun weekend!

A Sunday Doubleheader would be AWESOME!!! They have NCAA Monday Night Football on Labor Day. So why not?!

Don’t care who plays but college is where it’s at. Nfl sucks and is really boring now with contract disputes, players and legal problems, crazy owners moving teams? Tell me the last time you ever heard of that happening in NCAA?

Just wait a while…CFB is just as jaded, if not moreso.

Does Texas have a chance and why?