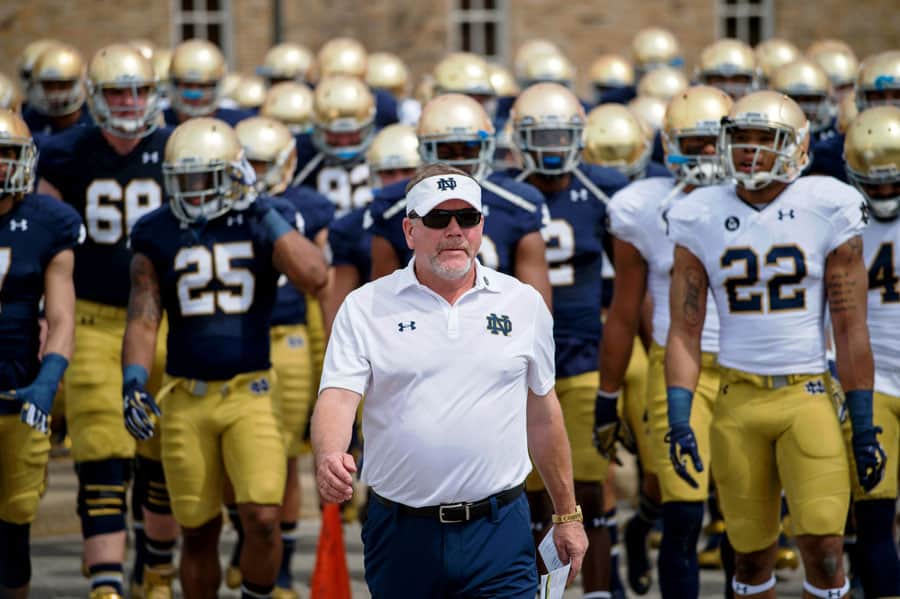 The Notre Dame Fighting Irish have announced kickoff times for their 2015 home games and their “Shamrock Series” contest against Boston College.

Notre Dame’s “Shamrock Series” game against the Boston College Eagles will be played at Fenway Park in Boston on Saturday, Nov. 21. The game will be televised by NBC at 7:30pm ET.

Two Fighting Irish home games in 2015 will be televised in prime-time by NBC at 7:30pm ET — the season-opener vs. Texas on Saturday, Sept. 5 and an Oct. 17 matchup with USC.

Kickoff times for road games at Virginia, Clemson, Temple, Pittsburgh, and Stanford will be announced at a later date.

Notre Dame just wrapped up spring practices yesterday with their annual Blue & Gold game, which resulted in a 36-34 win for the Gold team.

Removed the feed for now to help improve load time on mobile.

Ok, thanks for the heads up.

I’m curious as to NBC will bother renewing – doesn’t seem like a contract worth shelling out for, and it’d be better for them to put the money into an entire conference(s) and spread the games over NBCSN and NBC.

They’ll definitely “bother” to keep this contract with Notre Dame. Notre Dame = money in the bank.

Let’s call it what it is. The ND game in Fenway is in reality a road game. This is really a home game for BC, even though its officially a ND home game

Don’t be surprised if its 50-50 ND/BC fans.
Whenever ND comes to Stanford its that way.

Heck of a schedule

What a pathetic schedule. Thank God there’s a playoff system in place to prevent ND from slithering into a national championship game on the back of a third world cupcake slate like they did in 2012.

NBC And Notre dame have a deal that only they have and not any other Universities , the Irish are Nationally televised every game , and they will keep doing…N.D. makes millions for network as well as University.
GO IRISH !!!!