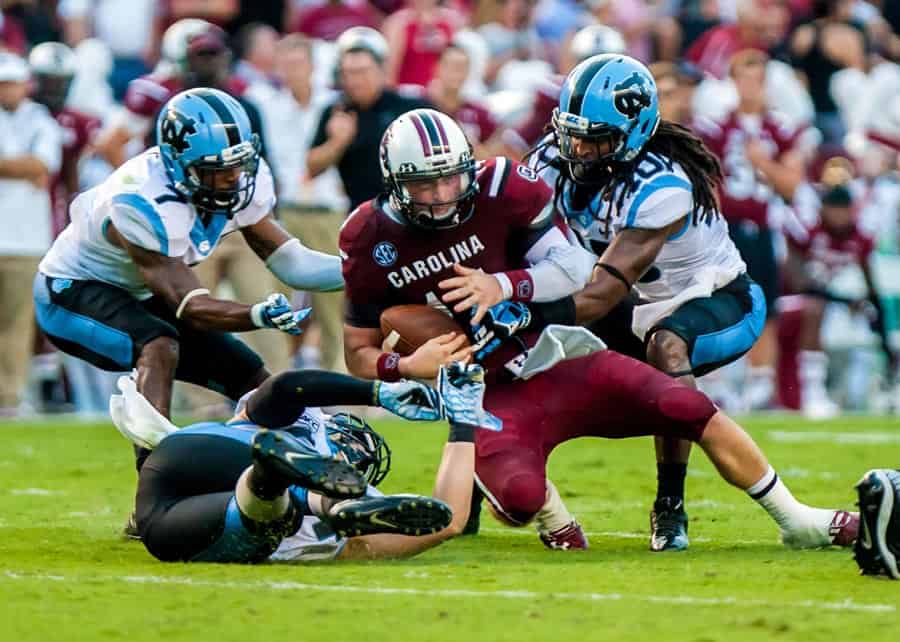 The North Carolina Tar Heels and the South Carolina Gamecocks will meet in Charlotte in 2019 and 2023, both schools announced today.

Both games will be played at Bank of America Stadium in Charlotte, North Carolina over Labor Day weekend. Exact dates will be announced later.

“We are extremely excited to announce that these great games will be played in Charlotte,” said Will Webb, Executive Director of the Charlotte Sports Foundation. “This is a tremendous rivalry that will be played in one of the best stadiums in the United States.”

North Carolina and South Carolina first played in 1903 and have met a total of 56 times. The Tar Heels lead the series 34-18-4.

The two schools will meet at Bank of America Stadium in Charlotte for the first time this season on Thursday, Sept. 3. The game, dubbed the Belk College Kickoff Classic, will be televised by ESPN at 6pm ET.

“The continuation of the South Carolina series offers our student-athletes a tremendous opportunity to play once every four years against a regional rival in an NFL stadium,” said UNC Athletics Director Bubba Cunningham. “This is an outstanding non-conference rivalry game for the state of North Carolina, our fans, and the city of Charlotte, which has always supported the Tar Heels.”

“On the eve of this year’s matchup, we are delighted to announce two more games are scheduled for the future,” said South Carolina Athletics Director Ray Tanner. “This is a great game for the student-athletes and fans at each school to kick off the football season.”

Appears the Gamecocks will never again leave the Carolina’s for an OOC game.

Well if they can steal recruits from the Tar Heels, Pirates & Tigers, why bother.

They play 10 Power 5 opponents a year. Why does it matter where. I wish all schools would play 10 quality games a year.

And, if they play two P5 OOC games a year, the other with Clemson, along with their series with ECU. I say more power to them. Much preferable than Western Carolina or Elon.

Maybe you should follow college football, or try to grasp the thread. If I was referring to UNC,I would not call Clemson an OOC game.