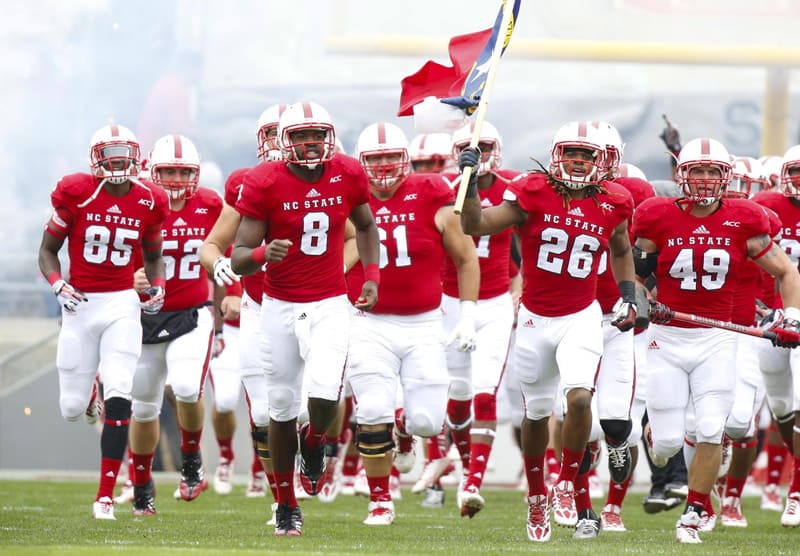 In a release this morning, NC State Director of Athletics Debbie Yow announced the addition of 15 games to their future football schedules.

NC State and Marshall have met three times previously, all in Raleigh, and the Wolfpack won each game.

Georgia State is scheduled to visit Raleigh on Sept. 8, 2018. The contest will be the first ever meeting between the two schools on the gridiron.

In 2019, the Ball State Cardinals of the MAC will also make the trek to Raleigh to take on the Wolfpack for the first time ever.

NC State and Old Dominion previously announced a home-and-home football series for 2014 and 2015, but today a third game was added. The Wolfpack will host the Monarchs on Sept. 17, 2016.

Under the ACC’s agreement with Notre Dame, the Wolfpack are slated to host the Irish on Oct. 8, 2016 and visit South Bend in 2017. Yow announced today that Notre Dame will return to Carter-Finley Stadium in 2022.

In the release today, Debbie Yow stated that NC State’s non-conference schedule will continue to consist of “one Power 5 conference team, two FBS opponents from among the American, C-USA, MAC, Sunbelt and WAC, and one FCS opponent.”

Although their future schedules are filling up, NC State will listen to any offers for neutral-site matchups.

“We continue to consider opportunities in Charlotte, Atlanta, Washington D.C. and other markets for the right combination of opponent, date, television exposure and revenue,” said Yow.

When your athletic director still thinks that the WAC is a conference, you schedule garbage games.

They need to schedule games against the Southwest Conference to stay relevant in this day and age.

How about a neutral site vs. Penn State?

So the summarize they added 1 game of note Notre Dame which the ACC actually booked for then in the ND/ACC rotation of games. Marshall and Ball State are mediocre mid major, Old Dominion is a transition program and the added 9 FCS games. Why they fee to book FCS programs so far in advance is beyond me, But the fact that they are loading up on these games while many programs are eliminating or reducing these games shows NC State has no desire to be a nationally prominent program.

Ball State actually had a really good year in 2013, not sure where you’re getting that from.

Say what you want about Marshall. We do our speaking on the scoreboard. Yes we were D1AA when you all barely beat us and u was ranked in the top 10. ,the officials have I two

The attendance was 55K in 75K stadium. my point is made perfectly. It was the lowest attended Chick Fil – A kickoff by over 13K, next lowest was UNC/LSU(68K) all the rest were above 70K

I would be embarrassed if I went to NC State. I’m so happy I came to my senses at the last minute.

Unless you were going to school to play football, you should be embarrassed to make that statement.

That is horrendously bad…and it’s not like their future schedules already had a lot of excitement to them to begin with. Wow. Just atrocious. If I were a ‘Pack fan I’d be thinking about giving up tickets and just watching from my house.

Two things: wasn’t Yow the one that left Maryland in that moon sized crater of debt? And she also still believes the WAC is a conference?

So, we should schedule Oklahoma, Southern Cal, Georgia, and Oregon to make you happy. Then play FSU, Clemson, Louisville, Virgina Tech to make idiots like you believe the schedule is “tough.” Those of you that believe this will be the same folks who sit home on your big wide a$$ and bitch that we don’t win 11 games every year. The goal is a bowl. Do that consistently then add one Power 5 contender each year,

The WAC is a conference, just not one you would be scheduling football games with.

Precisely. Lots of non-football schools in it. Their basketball and baseball lineups are pretty decent.

Sad she says WAC when she clearly means Mountain West Conference. And who says the east is out of touch with the west….

Let’s hear it from the NC State fans , if there are any. They are a completely irrelevant program, have not been to a major bowl game in decades. This litany of cupcake games is a joke and and is an affirmation that NC Stare prefers to remain irrelevant for the foreseeable future. Come on all you wolf pack fans, defend these actions. Your silence is taken as your agreement.

This is your schedule-palooza right here.

NC State really should be better than they are. They can get anybody into school and can recruit out of Georgia and the northern VA/DC area. They’re second choice in the state behind UNC but can only manage to win 7-8 games each year. I just don’t get it.

It appears you dont know much about ACC football or NC. NCSU has beaten UNC I believe 5 of last six years. UNC even cheated and still always remains the Dark Horse every year. Heck their accreditation as a University is now in jeopardy and on probation. NCSU is clearly a step above UNC. Even in basketball NCSU is making in roads beating UNC and advancing further in NCAA and thats again without cheating. UNC has never been a football program. But I do agree that these non conference schedule is a joke. LSU was a good one and so was Tenn. they should schedule Maryland and WVA or USC. Play USC in Charlotte like we did years ago with Russell Wilson. Heck line up UGA and PSU.

9 FCS schools? Is that some kind of joke? Seriously, if they can’t step their scheduling philosophy up, then there is no reason they should be part of a Power 5 conference. Scheduling that many FCS schools, up to ten years into the future, is asinine.

Nine FCS schools over nine years. Oner per year. Every SEC school is playing an FCS school in 2014. Almost all power 5 conference schools play one FCS team each year. Where’s the joke?

Clearly they want no part of the Power 5. This seems to be a move to ensure these games are grandfathered should these stiffs ban further scheduling of FCS opponents.

Wow! Their 2015 non-conference schedule is an absolute joke. People are right, they don’t care about growing their football program.

Why was the AD unable to schedule either Missouri, Kentucky. Missi St, Arizona, or even UCF. UConn or Army in 2015.

Instead N St scheduled 1 CUSA, 2 SunBelt and 1 FCS, with wo road games at South Alabama and at Old Dominion. Wow!

Maybe she thought she was scheduling Kentucky and not East Kentucky?

Now that NC St’s schedule is filled through 2019 the AD can take an undeserved vacation.

And maybe NC St should consider moving to the American Conference or CUSA.

State couldn’t hang in the American. ECU trounced them last year. Take a look at their 2014 OOC schedule. The Wolfpeckers are a joke…..

our OOC schedule is bad, agreed. FSU, Clemson, Louisville and UNC sure as hell aint USF, Temple, Tulsa, Tulane and ECU though. Just hope UCF can get out of there. Hope you enjoy your stay in the AAC for like, um, forever?

Tampapirate, you do credit to yourself with your knowledge of football, since NC State did not even play ECU last year. They did however have two common opponents, UNC which both obliterated, and UCF who whipped ECU in Greenville, and who State blasted in Orlando. The schools have played 28 times with State holding a 16 to 12 edge. ECU has won the last two meetings, 2010 and 2013, but the largest margin of victory was by State 52-14 in 2004.

To bad ecu will never amount to what nc state is.

Maybe she knows that NC State is going to the SEC and wanted to play a worthy schedule?

It’s all about the Benjamins!!

Why not extend the series with East Carolina? Maybe it is because ECU trounced them in Raleigh last year??

better watch out the herd is comming

You all don’t know what you are talking about. This year every SEC school is playing an FCS team. 4 SEC schools are also not playing anyone out of conference from a Power 5 conference. That is more than any other Power 5 conference. NC States scheduling is not that much different than other schools. One FCS school each season. Starting in 2016 they will play one power 5 school out of conference every year. We already play Folrida State and Clemson every year so the scheule is already good. The NC state schedules are very similar to many SEC out of conference schedules. So stop talking trash without all of the facts.

Marshall is gonna put a whooping on NC State

It is all about making sure the team had a good chance to get to a bowl game not to try and make a tough schedule that will be worth a top ranking if the developed a program and pulled it off. 2 games from those conf plus the lower ranking teams in the ACC is a pod chance at 5 wins. Then just need to pull of one more for a bowl game.
The AD is setting a clear message what the goals of the program are and as w wolfpack season ticket holder I am truly disappointed to the point it may be time to give up the support.

If this is your attitude, please give up your season tickets. I sit beside a bunch with your same attitude and I’d rather you not be there than bring you negative nelly BS to Carter-Finley each week. We will make sure someone who cares picks up your tickets.

I think State is smart to schedule with a bowl bid in mind every year. I don’t care who they play. That gives us one more game that season and extra practice time snd more revenue. Good for recruitment as well.

Just look at our conference schedule to see scheduling of some top teams. Think how demoralizing it is to have a loosing season. With the chance of possibly winning against FSU and Clemson in the same season and top that off with a win over UNC. I think that will get us to a major bowl or possibly the playoffs.

Sure we lost to Clemson but the Pack did not lay down and die. That is good attitude and a sign of good coaching.

PS. I just wish I had the time and funds to go to games at Carter Finley.. If you are a Pack season ticket holder count your blessings and stop being a fair weather fan.