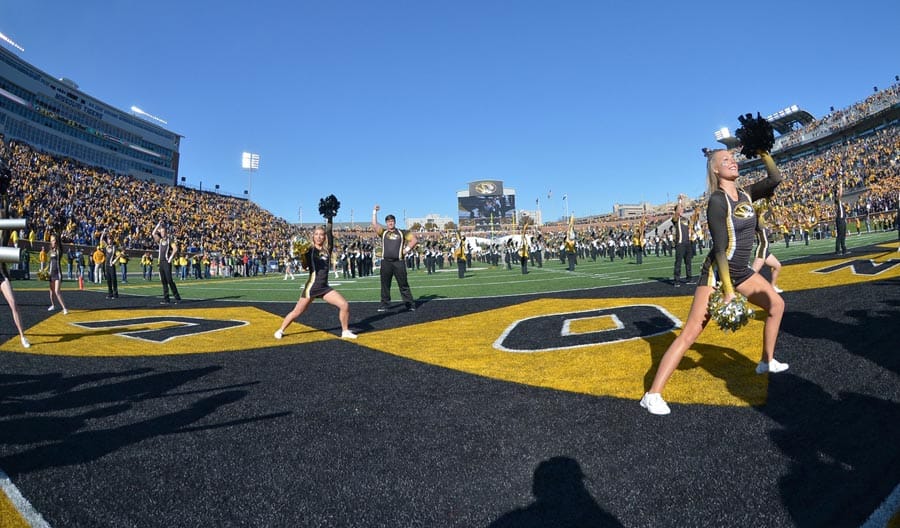 The Missouri Tigers have finalized their 2016 non-conference football schedule, the school announced today.

The Tigers open the 2016 season with a Sept. 3 trip to Morgantown to take on the West Virginia Mountaineers. That game is the first of a home-and-home series that concludes when the Mountaineers visit Faurot Field in 2019.

A week after visiting WVU, Missouri returns home to Columbia to host the Eastern Michigan Eagles. Two weeks later on Sept. 24, the Tigers play host to the Delaware State Hornets of the FCS.

Mizzou’s final non-conference game of the 2016 campaign is set for Oct. 22 at home against the Middle Tennessee Blue Raiders. The game, which was announced by MTSU on Wednesday, is part of a three-game series that has Missouri traveling to Murfreesboro in 2022 and MTSU returning to Columbia in 2023.

In SEC play in 2016, Missouri is scheduled to host Georgia, Kentucky, Vanderbilt, and Arkansas and travel to Florida, LSU, South Carolina, and Tennessee.

“We’re very pleased to have the 2016 nonconference schedule finalized and certainly thank everyone we’ve worked with to make this happen,” said Executive Associate Athletic Director Bryan Maggard, who oversees football scheduling for Mizzou. “We also want to make sure and thank our fans for being patient as we work through future scheduling challenges related to conference transition.  We feel that this is a very exciting schedule for our fans and program.”

P5’s stop playing FCS schools especially if your a coward conference who is too scared to play a 9 game conf schedule.

It’s not being scared, it’s called business. When the SEC & ACC need to move to 9 games, then they will, right now it is not called for but you would not understand that so just keep on whining.

You might think that their is no chance for FCS schools to win versus the ACC, Big10/12,Pac12,SEC,… but if you do you are not watching the whole range of scores. 17 year olds change more during college than they do in junior high and high school combined. The recruiting rating services have no idea how good players are once you get below the elite few who are invited to camps where they can be seen together. Not every football program can pay it’s own way with big fundraising efforts. The requirement of some football programs is to schedule games that cost the least or create a positive cash flow for the year.

Comment removed by Admin. Please debate or ignore rather than name call.

Any idea when the remaining schedule will be finalized?

Probably in the next few weeks, but there is no set date.