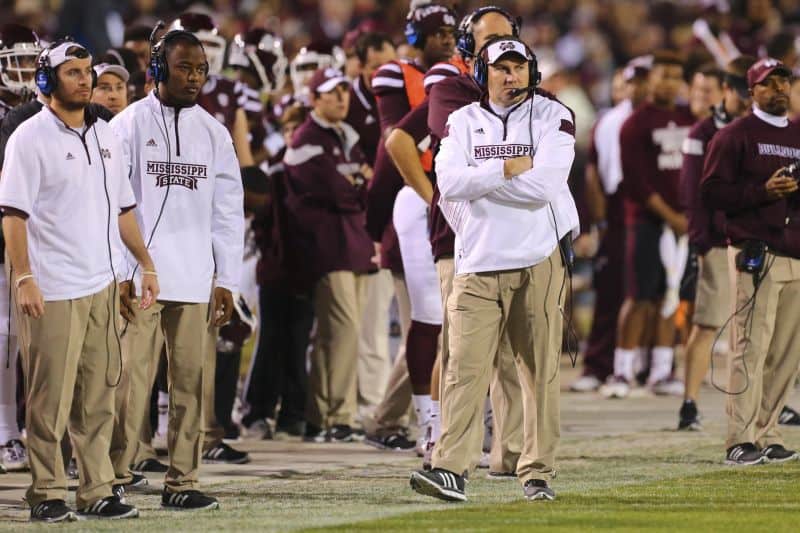 Dan Mullen's Bulldogs will visit BYU in 2016 and host them in 2017. (Spruce Derden-USA TODAY Sports)

Fresh off Brett McMurphy’s report this morning on the SEC’s adjustment of Power 5 scheduling requirements, a new home-and-home series has been announced.

The 2016 game will be played in Provo, with the 2017 game taking place in Starkville.

BYU and Mississippi State have officially announced their home-and-home football series for the 2016 and 2017 seasons.

In the first game of the series, BYU will host Mississippi State at LaVell Edwards Stadium in Provo on Oct. 15, 2016. The Cougars will then travel to face the Bulldogs at Davis Wade Stadium in Starkville on Oct. 14, 2017.

“It’s a great opportunity for our football team to play a very good SEC program,” said BYU Director of Athletics Tom Holmoe. “It’s been more than a decade since we played Mississippi State, and we are excited to have them back on our schedule. Visiting Starkville will be a great experience for our football program and our fans, and we look forward to hosting the Bulldogs in Provo.”

That makes 6 P5 schools BYU is facing in 2016 (@Arizona, @Utah, UCLA, @West Virginia, Mississippi State), plus of course @Boise State and @ Cincinnati from the top of G5. This is a formidable schedule, which looks more like a P5 than a G5.

I really think it’s only a matter of time before the SEC reclassifies BYU as a P5 opponent. It’s looking more and more like the Cougars are successfully switching the schedule to mostly P5 schools anyway.

Not a matter of time, looks like the SEC has chosen to include all independants to the P5 requirement.

current independents that is.

I wouldn’t get too happy. I don’t see a whole lot of wins, if any in that list.

Army doesn’t play SEC, and their schedule is pretty full so its really more a goodwill gesture.

But they need to make that clear. Otherwise the UMass @ Tennessee game in 2017 could count as P5 if the wording is simply Independents. And it looks like Idaho and NMSU are going to get kicked out of the SBC (don’t have the 7 of 9 votes for super majority to get extended).

As I mentioned before, UMass @ Florida also theoretically counts for 2016, although obviously Florida has a yearly P5 opponent anyway.

I hope you are right Jason. BYU hasn’t used the Hawaii rule as an independent yet and I didn’t think they would since it’s been hard enough getting 12 teams to play them each year. With the neutral site game, I have figured we’d miss out on a 6th home game.

Assuming an FBS home game a year, BYU’s schedules are coming into balance now they are getting home and homes with top schools. 2017 and 2018 home games are needed but only 2017 is lacking enough P5 opponents. So a 2017-2019 H&H starting in Provo with a P5 school is the last big need, the comments in the post below about SEC/ACC schools needing qualifying games suggests Tennessee needs games in the same two years:

Wisconsin moved its 2019 visit to Provo back to 2017 (where it has been previously.)

So BYU has that fourth P5 school but I still think we will see an FCS school instead of UNLV in 2017 rather than in addition to 2017.

I was at the BYU v Miss St. game in the 90s. Good to see a return visit…. although, if they are playing as well as they were last year, it might not be a pleasant home game to watch.

…and one more TBD

I’ve never seen a WAC schedule like that, have you?