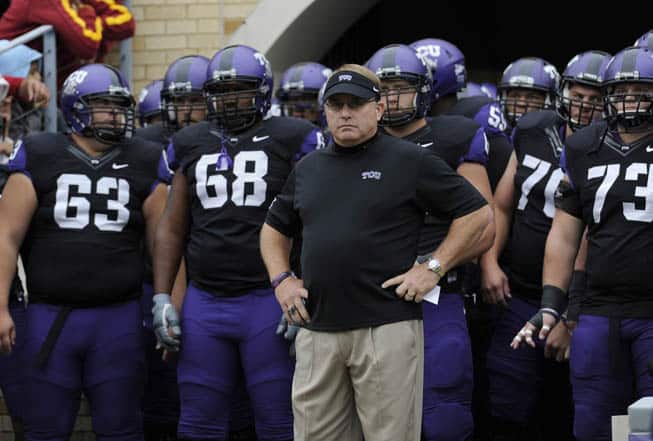 The Minnesota Golden Gophers and the TCU Horned Frogs have
scheduled a home-and-home football series for 2014 and 2015, both
schools announced today. Minnesota will travel
to face TCU at Amon G. Carter Stadium in Fort Worth on Saturday, Sept.
13, 2014. The Golden Gophers will then host the Horned Frogs at TCF
Bank Stadium in Minneapolis on Thursday, Sept. 3, 2015. “We’re
excited about the opportunity to face a very good Minnesota program
that’s coming off a bowl season,” TCU football coach Gary Patterson
said. “To schedule someone
non-conference from such a prestigious league like the Big Ten
helps enhance our recruiting efforts. We’ve played Big Ten
opponents in the past and know it will be a tremendous challenge.”
Minnesota and TCU’s first and only match-up took place on Sept. 28,
1974 in Minneapolis. The Golden Gophers nipped the Horned Frogs
9-7. The announcement of the series vs. TCU completes the 2014 and
2015 non-conference schedules for Minnesota. The Golden Gophers
open the 2014
season at home vs. Eastern Illinois on Aug. 28, host Middle
Tennessee on Sept. 6, travel to TCU on Sept. 13, and host San Jose
State on Sept. 20. In 2015,
Minnesota opens at home vs. TCU, which replaces a recently canceled
game vs. South Dakota State of the FCS. The Gophers visit Colorado
State on Sept. 12 and then host Kent State on Sept. 19 and Ohio on
Sept. 26. TCU now only needs one additional non-conference game for
2014 and 2015. The 2014
schedule includes a visit to SMU, but a date is now to be announced
since the Minnesota game has taken that spot. The Horned Frogs’
schedule in 2015
now features the opener at Minnesota on Sept. 3 and a visit from
SMU on Sept. 19. Football Schedules

Thanks. Confirmed with TCU that the game at Arkansas has been moved from 2015 to 2017.

What happened to Minnesota’s scheduled game against NMSU?