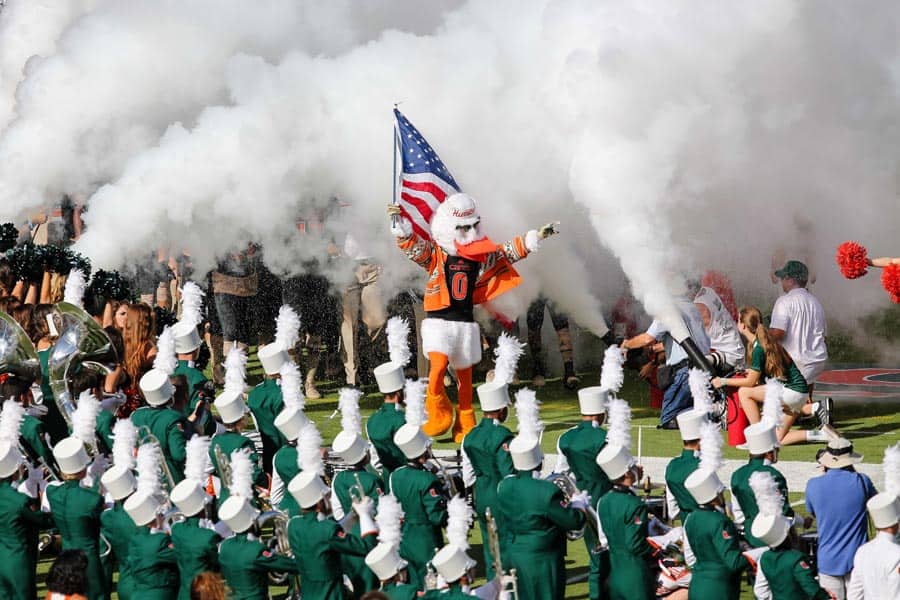 Miami will host the Mountaineers in 2021. (Steve Mitchell-USA TODAY Sports)

Barry Jackson of the Miami Herald first reported the possibility of the Hurricanes-Mountaineers series earlier this month.

In the first game of the series, Appalachian State will host Miami at Kidd Brewer Stadium in Boone, North Carolina on Sept. 17, 2016. Five seasons later, the Mountaineers will return the game and play at Sun Life Stadium on Sept. 11, 2021.

“One of our goals is to play opponents in all sports that generate excitement among our University community, students, alumni and fans,” Gillin said. “Miami definitely fits the description.”

Appalachian State and Miami have never faced off on the gridiron.

Miami has now tentatively completed their non-conference football schedule for the 2016 season. The Hurricanes are also slated to host Florida A&M on Sept. 10, travel to Notre Dame on Oct. 29, and host Florida Atlantic on a date to be determined.

The series with Appalachian State is the fourth future home-and-home series scheduled for Miami against a team outside the Power Five. The Hurricanes are slated to visit Arkansas State in 2017, Toledo in 2018, and FIU in 2019. The FIU game will technically be a road game for Miami but will be played at Marlins Park, Sun Life Stadium or another venue.

In order to host Miami in 2016, Appalachian State has postponed their previously scheduled home game against the North Carolina Central Eagles of the FCS. A new date for that game has yet to be determined.

Appalachian State opens the 2016 season on Sept. 3 at Tennessee. The Mountaineers then host Old Dominion on Sept. 10, Miami on Sept. 17, and visit Akron on Sept. 24.

There was a time when the Hurricanes would play anyone anywhere….I am not sure this is what they had in mind.

gonna be more embarrissing after we beat you

The attendance @ this game beat any other Miami home game!

I like this match-up. It may not be the most appealing match-up ever, but it will be a really good game. This is a good sign for for App State. Maybe not so good for Miami with the scheduling, but this is a win-win for both teams.

I never thought I would find such an everyday topic so engltalhinr!

Sad? No, sad will be the state of the hurricane fans when App State lays the smack down on the U….

More embarrassing than the Clemson game at home this year??????????

This is called “Miami AD Blake James is building goodwill in areas around the country which have mostly forgotten about U football.”
For recruiting purposes, playing in North Carolina, Arkansas, and Ohio isn’t a bad move at all. NC high school football is hugely competitive. Why yield all these recruits to UNC, NCSU, WFU, Duke and Clemson? Arkansas is fertile ground, too. There are only two Div I colleges to compete against, UAF and ASU. Ohio is always good call–Miami used to attract a lot of ballers from the Midwest and doesn’t much anymore.. .and playing Toledo as opposed to tOSU means a likelier win.

I thought bake James was smart, is he? Schedule a Baylor, alabama,Michigan wvu can beat those teams grow a pair hire Davis show the world who has the greatest football program

Miami will probably have a lot of fans at this game. It is a little known secret that most rich south Florida Floridians have summer homes in the North Carolina mountains.
I just wish that home and home with Southern Miss would happen. Florida raider Louisville has increased their recruiting in Mississippi the last few years so it would make since for Miami to do the same. At least it makes more since than playing Arkansas State in Jonesboro. Mississippi State won’t even do that!

the U better get ready for app state… you think just because there a power five school they will just blow by app, yea tell that to Michigan fans. #ftc