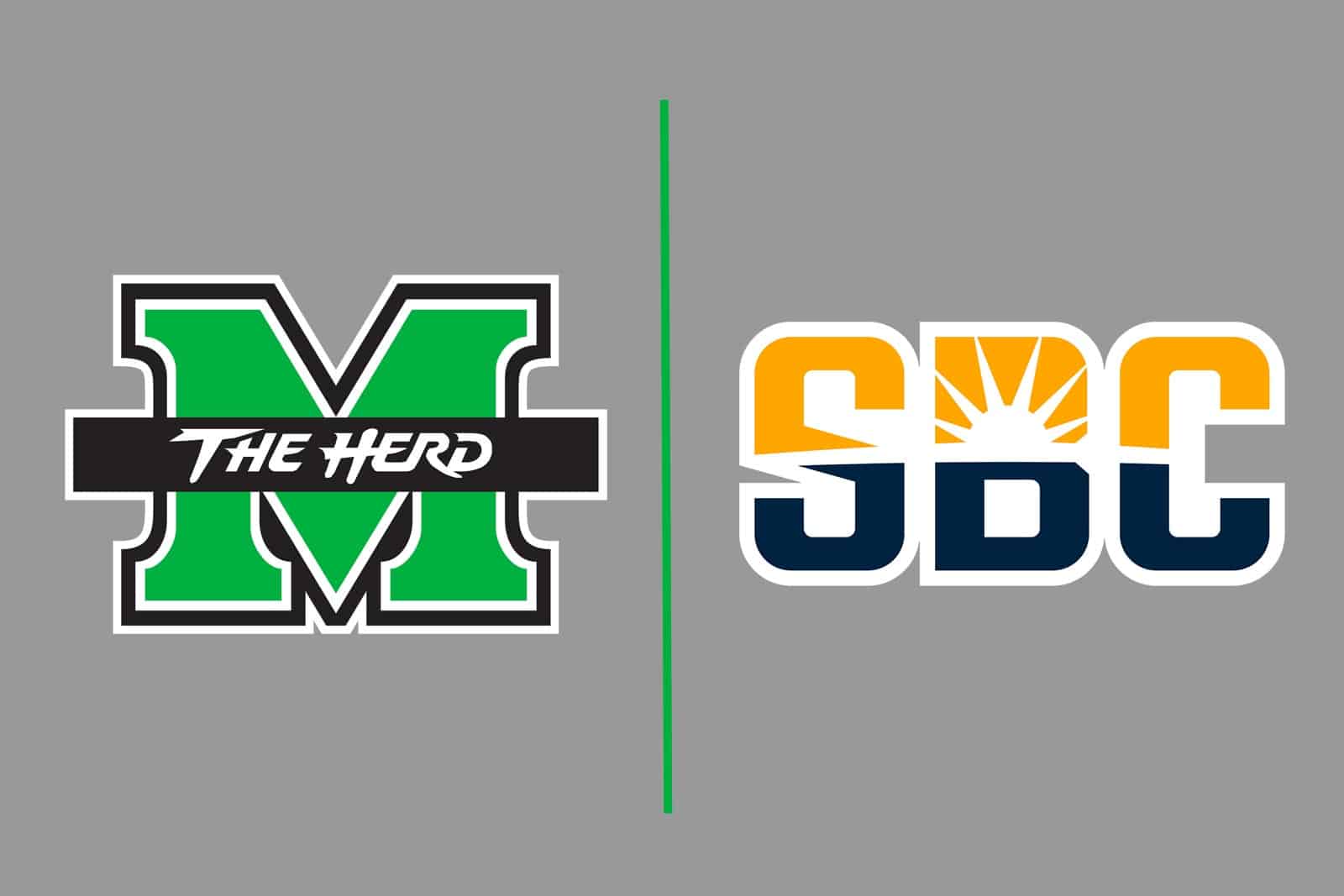 The Marshall Thundering Herd have accepted an invitation to join the Sun Belt Conference, it was announced on Friday.

Marshall, currently a member of Conference USA, will likely enter the Sun Belt Conference no later than July 1, 2023.

Although a press release has not yet been issued by Marshall University or the Sun Belt Conference, both entities did reveal the news via their Twitter accounts.

Let’s have some fun! ☀️#RiseAsOne | @SunBelt

Marshall has been a member of Conference USA since 2005. Prior to that, the Thundering Herd competed in the Mid-American Conference (MAC) from 1997 through 2004.

On Tuesday, the Sun Belt officially announced the addition of the Southern Miss Golden Eagles to the conference. That was followed by an announcement on Wednesday that the Old Dominion Monarchs are also joining the Sun Belt.

James Madison of the Colonial Athletic Association in the Football Championship Subdivision (FCS) is also expected to apply for acceptance into the Sun Belt Conference. That would give the Sun Belt a total of 14 football-playing schools.

If C-USA can’t remain operational, even as a FBS-only conference, I think that UMass would strongly consider dropping back down to FCS.

That report had been called into question. But UTA and the MVC were discussing a few months ago…
.
And I’m sure the Southland or OVC would consider anything at this point including non-football programs like UTA and Little Rock…

Interesting. So that opens the door for the Sun Belt to add 2 more from FIU, WKU, MTSU, and LT. And then maybe the other 2 to the American or MAC?
So UTA and UALR probably to the Southland. Both of those schools could start FCS programs without having to build stadiums, as there are football stadiums in Arlington and Little Rock, but I can understand if they feel like they can’t financially support a football team.

With the AAC’s KO followed by the Sunbelt’s scavenging the leftovers of C-USA, the 2 Conferences have done to C-USA what the MW did to the WAC in 2011.

That’s a 1A Football Pie Shrinking Status instead of Growing the Sport.
Worst case scene, but very possible.

1A Football will expand & grow only if It has it’s own Governing Body separate from all other sport considerations. Away from the nongoverning NCAA.

Idaho is back in the Big Sky with other schools like itself (Idaho State, EWU, Montana, Montana State, etc.). Their problem was that they felt they needed to compete with Boise State, but they were not nearly as successful as them once they both moved up to FBS in the late 90s. As a result, once the WAC dropped football, and the Mountain West did not come calling, the Big Sky was a good place to return to.
I don’t think that the C-USA leftover 5 will have trouble finding new conferences, as their facilities and recent on-field success are suitable for an FBS conference, unlike Idaho.

Let’s say UTEP, LT, MTSU, WKU, and FIU all stay.
Then they add UTA and UALR as non-football members–that’s 7.
Then they add Liberty, NMSU, UConn, and UMass as football-only members–that’s 9.
Then maybe they add two of those FCS schools that you mentioned to get to 9 full-time members, and 11 for football. That would suffice, but if one of the remaining 5 decides to leave before anyone new is added, I don’t see this happening.

With the proposed expulsion of Little Rock and UT Arlington for not having football programs (they could very well end up in the Southland, which would be a return for the latter school), does the Sun Belt go for two more football-playing schools to go to 16.

Louisiana Tech has been largely good under Skip Holtz. The problem is getting them to go along with being in the same conference as UL Monroe.

We’re on a similar thought process here. Is there a conflict between ULM and LT that would prevent them from being in the same conference? To me, the “obvious” choice, assuming UTA and UALR get kicked out, is the SBC adding LT & FIU. MTSU & WKU seem like a package to me, either they’ll both go to the MAC or AAC. There is a chance that they could stay in C-USa as I said in a previous comment, but I’m just not sure anyone would want to join that league right now.

ULM and La Tech are only 32 miles apart and the hate is real. ULM will veto La Tech joining the Sun Belt. Louisiana Lafayette will back them as Monroe is their sister school.

Is it really that easy to block a team entering a conference? How many schools need to approve a new member?

If Louisiana Tech is a go, could the Sun Belt also make a play for Florida A&M and make them the first HBCU in FBS?

FAMU tried FBS about 17-18 years ago, and it was a disaster. They had the moral support from all parties, but not the $$$$. Moved back down to the MEAC, and now they’re in the SWAC

That’s because they tried being independent. Being in a conference provides financial stability.

Beautiful conference, unbroken from West Virginia to Virginia (2) to North and South Carolina to Georgia (2) to Alabama (2) to Mississippi to Louisiana (2) to Arkansas to Texas. Elegant.

Perhaps the fact that both Middle Tennessee and Western Kentucky (along with FIU) spurned the Sun Belt in 2013 is the reason for the large vacant swath of uninvited geography known as Kentucky and Tennessee that would make the conference even more elegant.

Liberty is insane for not jumping into this party

The MW should go ahead and bite the bullet and get UTEP and NMSU. Else when the XII or PAC grabs Boise and/or SDSU or UNLV, they aren’t rendered under 12.
.
La Tech and FIU better pray the SBC ends up deciding 16 is the next step… Because if the XII takes Memphis from the American, the SBC is going to get raided…

From what I’ve heard from various people on twitter:
1. The MWC probably won’t expand until their current media rights contract is up in 2026–the tv networks don’t want to pay more, and the schools don’t want to take less of the pie.

2. LT & FIU to the Sun Belt is unlikely too–apparently LT has had past feuds with ULM, and if the SBC really wanted FIU, they would have taken them last week. Although I do agree with you that if Memphis goes to the Big 12, LT would likely be added in their place.

3. The Pac-12 would only add schools that have strong Olympic sports. The conference prides itself in being “The Conference of Champions”, they’ll only take you if you’re good at sports like water polo or women’s gymnastics. I’m not sure if Boise State, SDSU, or UNLV fit that bill.

Based on that, unless C-USA adds multiple FCS schools, there is a strong chance that it becomes a football-only conference from 2023-25, with the following members: NMSU, UTEP, LT, FIU, Liberty, UConn, UMass, and maybe Army. UTEP would probably join the WAC, LT to the Southland, and FIU to the A-Sun, all as as non-football members.

I’m a Uconn fan (basketball) only chance in hell that Uconn would even think about joining would be football only.

Even then uconn is playing a better schedule as a Indy ie next season; Syracuse, Michigan, NC State, Fresno State, BC, Liberty, Army.

The other issue would be that travel which was a main reason why they left the American. The athletic program has been running in the red for years.

Realistly for both uconn and umass if they don’t improve over the next 4-5 years I can see them going back down to FCS.