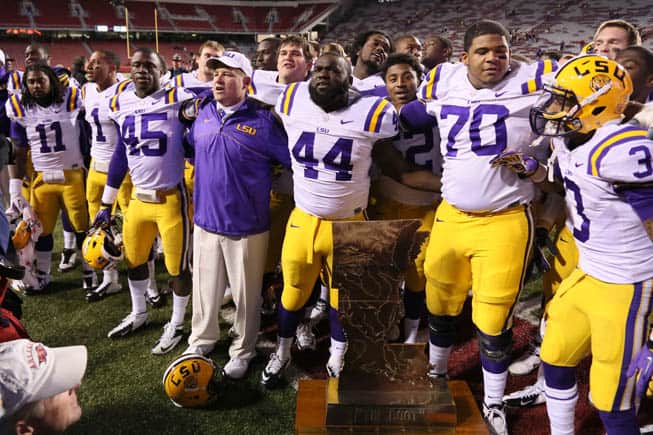 The first game will be played at Reliant Stadium in Houston in 2014 and will be the season-opener for both schools. The deal for that game is about 95% done, Alleva told The Advocate.

“The contract is not signed but it’s very, very close,” Alleva said.

LSU and Wisconsin would then meet at Lambeau Field in Green Bay to open a future season which has not yet been determined.

Jeremy Fowler of CBSSports.com reported earlier today that the Lambeau Field game will be played between 2016 and 2018, likely in 2017.

News of a potential LSU-Wisconsin match-up at Lambeau Field was first reported in late April by the Journal Sentinel. When contacted at that time, Alleva said “The novelty of playing at Lambeau is great, but there’s a whole lot of things to weigh. The financial things. We’ll see.”

The focus then shifted to the 2014 game at Reliant Stadium when FOX 26 Sports in Houston reported that a deal for the game was done. But LSU associate athletic director Verge Ausberry quickly denied that report and stated that a contract was not in place to play Wisconsin in Houston.

Since news of this series first broke, both schools have made alterations to their 2014 football schedules. As we first reported earlier this month, LSU has moved a 2014 home game against Georgia Southern to the 2017 season.

That leaves the Tigers with home games next season against ULM on Sept. 6 and New Mexico State on Sept. 27.

Wisconsin announced their 2014 football schedule two weeks ago. Absent was a previously announced season-opener at Washington State, which only added fuel to the LSU rumors. The Badgers also added a Sept. 6 home game against Western Illinois to accompany visits from Bowling Green on Sept. 20 and USF on Sept. 27.

Wisconsin playing at Lambeau will be pretty sweet. They should try to do a game there every other year or so

this game will be great…only problem is Les will talk about how he hates to play Florida cause it’s not fair… we are all tired of hearing it Les! Why do we not hear Florida crying? or Auburn? or Tennessee.?Tradition is important to some Les. Why don’t we cancel Ohio St.-Michigan or USC-UCLA while we’re at it?