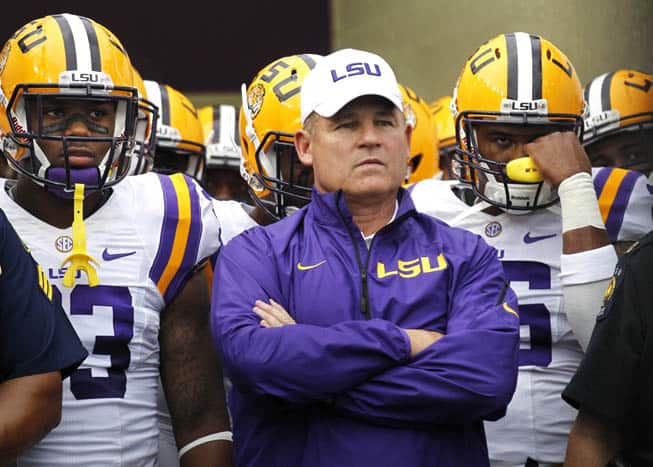 Rumors of a postponement or cancellation of the LSU-NC State series have been going around since last year, but now a resolution has been reached.

According to a report by Joe Giglio of the News & Observer, the LSU Tigers have canceled their future football series vs. the NC State Wolfpack. LSU was supposed to host NC State on Sept. 9, 2017 and travel to face the Wolfpack on Sept. 12, 2020.

A buyout of $1 million kicked in for LSU had the Tigers opted to play the 2017 game vs. the Wolfpack and then later cancel the 2020 game in Raleigh.

With the NC State series now off the table, LSU needs one non-conference game in 2017. The Tigers are currently scheduled to play Georgia Southern (Sept. 2), Syracuse (Sept. 9), and Troy (Sept. 30), all at Tiger Stadium in Baton Rouge.

On Sunday, the SEC future scheduling format was revealed by the conference. Set to begin in 2016, teams will need to comply with a strength of schedule mandate by making sure another Group of Five team is on their slate.

NC State fit the bill for LSU, but the Tigers also have another ACC team scheduled for 2017 — Syracuse. Earlier this month, LSU and Syracuse finalized a home-and-home series for 2015 at the Carrier Dome and 2017 at Tiger Stadium.

As for NC State, their future schedules have taken a hit with the loss of the LSU series. The 2015 slate is lackluster, with Troy at home and trips to Old Dominion and South Alabama.

But it gets better in 2016 when NC State hosts Notre Dame and travels to East Carolina. NC State will then have to turn around and travel to Notre Dame in 2017, per the report by Joe Giglio.

LSU will be calling Savannah State…..

Not if N.C. State can call them first!!!

“Group of Five” = mid-majors, not power teams. I hate this new terminology.

with the addition of Syracuse, many fans would have said LSU is trying to pick low hanging fruit from the ACC. Hopefully they can find another top ten Group of Five team to replace NC State.

It doesnt get lower than NC State.

Actually UNC and Wake are lower not to mention UVA.

The addition of BYU to the 2017 schedule with a game at NRG in Houston…. is a huge upgrade over an NC State game….