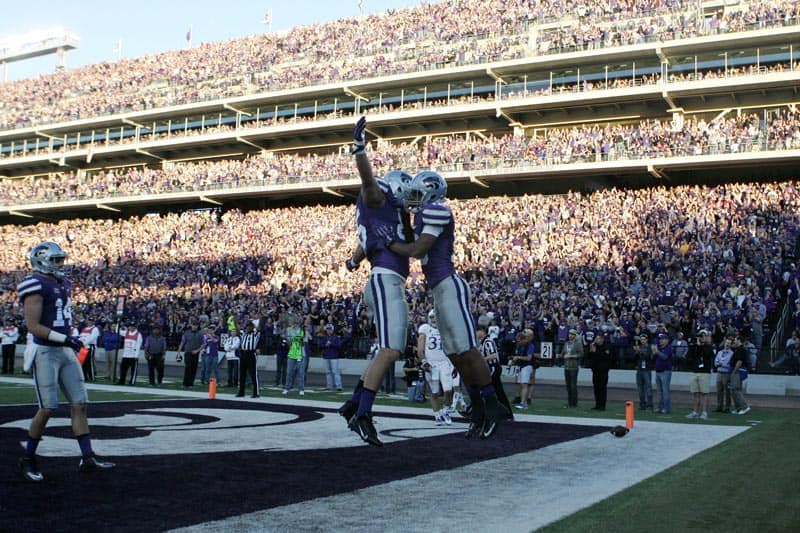 The Kansas State Wildcats and the Vanderbilt Commodores have scheduled a home-and-home football series for 2017 and 2020, K-State announced today.

In the first game of the series, Vanderbilt will host Kansas State at Vanderbilt Stadium in Nashville on Sept. 16, 2017. The Commodores will then travel to face the Wildcats at Bill Snyder Family Football Stadium in Manhattan on Sept. 19, 2020.

Kansas State and Vanderbilt have met once previously — a matchup in Nashville in 1984. The Commodores won that game 26-14.

The addition of Vanderbilt tentatively completes the 2017 non-conference schedule for K-State. The Wildcats are set to open the season vs. Central Arkansas on Sept. 2 and later host Charlotte on Sept. 23.

The Commodores now have three non-conference games scheduled for 2017. Vandy is slated to open at Middle Tennessee on Sept. 2 and later hosts Western Kentucky on Nov. 4.

The Kansas State-Vanderbilt matchup in 2020 is the first announced non-conference game for Vandy and second for K-State that season. The Wildcats are also scheduled to host Buffalo on Sept. 12.

Good for both programs. I believe these types of match-ups will be harder to find in the near future as teams will be scrambling to find these types of P5 match-up opportunities. The early bird gets the worm they say, so don’t wait too long or you’ll be stuck with well deserved criticism.

Once again KSU has set itself up with a dismal OOC schedule for 201 and 2016. Just the way Snyder prefers. Wildcat fans should be disappointed with these weak schedules. Certainly if KSU is on the bubble to play a CFP Bowl, the CFP committee will note Kansas State’s (and Baylor) purposely weak 2015 and 2016 OOC schedules. Same with Baylor (and Oklahoma State in 2015).

The immediate question is who KSU is scheduling for 2016? How about a neutral site game in KC, versus Missouri? (just like Mizzo is playing BYU in 2015 game in KC).

Of if KSU cannot get Mizzo on board schedule BYU to a neutral game in KC.

But Snyder wants seven home games. Reports in the media last month stated KSU was in process of scheduling a “guarantee” home game versus a G5 (non P5) program, in order to play seven home games. So remaining options appear to be paying Hawaii, NM, UNLV, UConn, Toledo, Buffalo, Army or NM St. Or if the payout is big enough a G5 program might be willing to sacrifice a home game versus a FCS opponent and opt to play in Manhattan.

Almost every P5 program plays 7 home games, many actually play 8. It’s about revenue to have 7 games. Very few teams play 6home/6 away,,they all want 7 or 6 and a neutral site.

“Once again KSU has set itself up with a dismal OOC schedule….” WTF?

You might want to actually do some research before you respond.

hopefully vandy is a good team by then!!!

I doubt it, every time Vandy gets a good coach they are off to another program. It is good for Vandy to have this game scheduled though.

Congrats to Snyder for actually having two Power-5 series on his future schedules now (since almost all of the others that KSU has played recently were set up during his brief absence, and most were cancelled or attempted to be cancelled). Now if they’d actually consider mixing in some higher tier ones from time to time. You know, of course, that Miss State was scheduled just a bit before their fairly successful previous season.

But compared to many other teams, it’s hard to complain that they’re actually playing a home/home with another power-5 team.

With this series the SEC and ACC have almost covered the 9th P5 opponent for 2016-2019. Notre Dame gives the ACC a decided advantage in meeting the 9 game requirement, the SEC has to scramble.

Kansas State and Arizona have 2016 openings and no P5 OOC. Indiana and Arizona for 2017. 2018 has Indiana, Minnesota, Wisconsin, Texas Tech, and Oregon still open. I count 13 other P5 schools with possible openings in 2019.

I suspect Alabama for 2017 is looking at Arizona, and for 2018 at Wisconsin or Notre Dame.

Very cool to have so many P5 OOC games now

Alabama and the rest of the SEC will not scramble. They will wait till 1 yr before and then whine nobody will play us. Of course all the other schools with AD’s that do their jobs schedule games in advance and thus have no last minute spots available. It’s absolutely pathetic job by the Bama AD to have the only future game after 2016 to be Colorado state in 2017. Most schools have their P5 OOC’s scheduled long ago.

The lack of scheduling in advance is by design by the SEC. It gives them an excuse why they play the least P5’s OOC and the most FCS schools. They say everyone is booked so that’s why some of our schools have pathetic OOC’s. This is going to only get worse b/c with B10, B12, P12 having 9 games means they have 4 home/5 home years in conference which means most are going to schedule their P5 OOC to be home games in their 4 conf home games year.

Case in point, were listing schools with open spots like WI, you have to look at the 4/5 conf home game split years. WI has scheduled all it’s P5 OOC as home game in even years(vtech, WSU, LSU) and away games odd years. So Wi is not lan option for 2018 unless Bama once to come to Madison iand have a return date in a odd year. So, it’s more than just slots it’s about when the home game is for schools with 9 conf games.

Schoup is right on. Well said and to the point. No scrambling required if you plan ahead. Poor planning results in poor results. Thanks for sharing your thoughts Schoup.

Kansas State/Snyder cancelled a home-and-home with Oregon just a few years back, Why would the Ducks want to schedule KSU now?

The reason Oregon has the opening in 2018-19 is because Texas A&M cancelled a home-and-home with the Ducks.

Both Oregon and Alabama have openings in 2018-19. How about make that home-and-home happen. Or is Tide so addicted to those so-called south regional pro stadium “neutral field” games?

“Both Oregon and Alabama have openings in 2018-19. How about make that home-and-home happen. Or is Tide so addicted to those so-called south regional pro stadium “neutral field” games?”
Sure, bigger paychecks, better recruiting, easier & cheaper for fans, more convenient. Last time I checked Oregon played in a so-called “neutral field” in 2011.

I think you guys are wrong. Alabama is already lining up its opponents with the help of Jerry World management. That’s big bucks.

The SEC made a decision two years ago and their teams are addressing it. Most are in good shape 5 years out, getting more near term is a bit more difficult. But its amazing we are down to just a handful still looking, and they have a year to get it done.