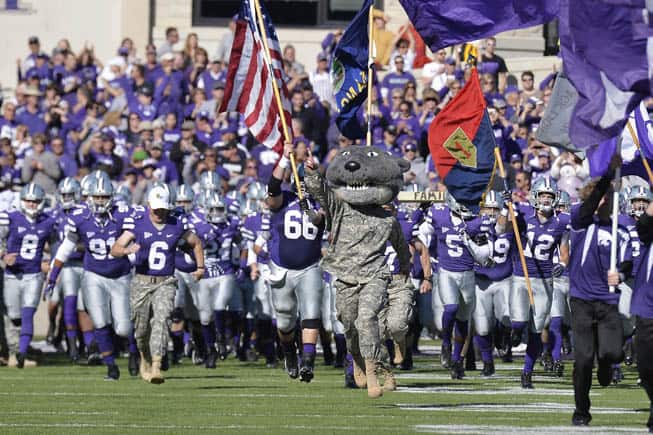 The Kansas State Wildcats have added the Louisiana Tech Bulldogs to their 2015 football schedule, The Wichita Eagle has reported.

Kansas State will host Louisiana Tech at Bill Snyder Family Football Stadium. An exact date for the game in 2105 is currently unknown.

K-State already has their season-opener set for the 2015 season, a home game vs. South Dakota on Sept. 5. The following week, the Wildcats travel to face the UTSA Roadrunners at the Alamodome (Sept. 12).

Update: Louisiana Tech has announced that the game will be played on Sept. 19, 2015.

The addition of Kansas State gives Louisiana Tech three of their four non-conference games in 2015. The Bulldogs are also slated to travel to Mississippi State on Sept. 12 and host UL Lafayette on Oct. 3.

Just another scheduling blunder by KState. If u don’t have at least ONE BCS school on your nonconference schedule, you won’t get picked for the college football playoff. Atrocious scheduling.

There is no longer a BCS. Also, they have a 52,000 seat stadium and are not going to get Top 25 teams to travel there. LTU is about the best a school like KSU can get without having to give up a road game or worse yet, 2 road games.

When someone makes a reference to BCS teams/schools and your response is “There is no more BCS” you are wasting your breath. Everyone understand what someone means when they say a BCS School (and in case you don’t its any member for the Power 5 Conferences, which includes Notre Dame by way of its half in-half out relationship with the ACC)

Bill Snyder is without any doubt the Greatest Coach who has ever coached at K State and who in all likelihood ever will coach at K State.

Nonetheless the model teh Coach Snyder used to build K State’s program (7 home games per year and make them against team that they have a good chance of defeating) has served its purpose and is now in need of modification.

K State has one of the best marquee games a Big 12 School has ever had on the schedule in the pat 20 years. The Defending SEC Champions, Auburn. Did Coach Snyder have a lapse of judgement? NO THIS GAME WAS CONTRACTED BY RON PRINCE.

What does that say about a program that the best OOC game you will ever schedule was schedule by a Coach you paid over $2 Million to fire.

K State has escaped the bonds of Futility U. They have won 6 Big 12 North Division Championships and 2 Big 12 Championships. They are poised to take on the task of winning a National Championship sometime in the next 12 years.

Much was made of the Big 12 placing 9 teams in Bowl games in 2012, and this outcome was used to talk down the need for scheduling OOC Top 65 Teams, with the rationale going like this. The SEC only plays 8 Conference Games, a couple of cream puffs and maybe 1 Marquee game. The 2012 (Big 12) Outcome convinced many that the Big12 In Conference SOS was good enough to match the SEC SOS even if the SEC teams all scheduled at least 1 Marquee OOC game.

If K State is ever going to win a National Championship, they damn well can not depend on all member schools of the Big 12 having good enough records to bolster the K State SOS in the eyes of the Selection Committee.

The Current Big 12 Alignment (10 members, 9 games, alternating 5 home 4 away/4 home 5 away) guarantees K State 4 home games a year “In Conference” and every other year 5 home games “In Conference”. By scheduling Marquee games against Top 40 schools in a home and home agreement that places a Top 40 school in Manhattan every other year (in the years where they have 4 “In Conference” home games, they would then be playing the “away end” of these games in years they are hosting 5 “In Conference” games in Manhattan. leaving them 2 additional OOC slots for cream puffs. This would get them to 7 homes games every year, at least 1 Marquee game and at least 2 cream puffs.

For K State to continue to schedule 3 teams OOC that have no value for SOS in the eyes of the College Football Playoff Selection Committee is a simple admission that K State has no intention of competing beyond the Big 12 for a National Championship, perhaps Coach Snyder has embraced his inner Clint Eastwood (“A man’s got to know his limitations!)

Nice post. Power 5. Agreed! Used old lingo. They can get good teams to come to Manhattan. They just need 1 Power 5 school a year NC is all I’m saying only because they don’t play an extra game in a Conference championship. If lets say KState goes 11-1 next year and Ohio State goes 12-1, guess who’s getting picked? Ohio State. The BIG 12 really has to seriously address this and go after a BYU or a Boise State. Have BYU, Boise State, Iowa State, Kansas, Kansas State and Oklahoma in the North and Texas, Texas Tech, TCU, Oklahoma State, West Virginia and Baylor in South. By not having a Championship game (the other 4 power conferences do) – they are not setting themselves up to be selected by the
New college football playoff. Unless somebody goes undefeated.

K-State has Auburn at home this year and Miami recently, plus USC in the past 10-15 years. They certainly can attract good OOC foes if they really want to.

USC and Miami were home and home series. It looks like they get a big name every 7 years. Also Miami is not that great an opponent financially. They don’t draw much of a crowd. Last year they only averaged 47,000 a game at home, which was about 50th in the FBS.

For K-State to get a quality BCS school for one game a year they will need to play them home and away. I can see playing one div1aa and one mid-major each year but come on gives the fans an interesting non-conference opponent now and then. Snyder always wants to schedule weak non-conference games and he is successful at always having a competitive and solid team but as was shown in last years Fiesta Bowl blow out loss to Oregon there is a definite ceiling against higher quality opponents.

Big Time Typo/Correction: I had K State with 6 Big 12 North Championships the real number is 3. Sorry, save your eggs and rotten tomatoes

I don’t care who we play. It’s going to be an outstanding season for the Kansas State University football team. No one can deny greatness when they see it. Go Cats!