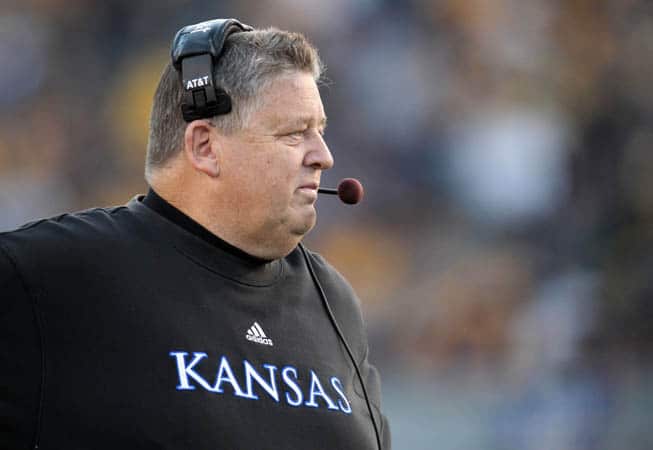 The Kansas Jayhawks and the Hawaii Rainbow Warriors have scheduled a 2016-17 home-and-home football series, it was officially announced this afternoon.

The two schools first and only meeting was back in 1985 in Honolulu. Kansas defeated Hawaii 33-27 in that contest.

“We are very excited to announce this home-and-home series with Hawaii,” said Kansas head coach Charlie Weis. “We recognize Hawaii and the Islands as a fertile recruiting territory. Both our current players and prospects are excited that these two games are official.”

The announcement of the series with Hawaii tentatively completes Kansas’ non-conference schedules in both 2016 and 2017.

In 2016, Kansas also hosts Ohio and travels to Memphis. The Jayhawks return the trip to Ohio in 2017 and also host Central Michigan.

Kansas could add an additional non-conference game in 2017 under the Hawaii Exemption. Teams that travel to the islands can add an extra game to offset the travel costs, while Hawaii can always play 13 games.

The addition of Kansas gives the Rainbow Warriors their second game in 2016. Hawaii is currently slated to travel to Michigan on Sept. 3, 2016.

Kansas is the first announced opponent for Hawaii for the 2017 season.

clearly you since you read the story and commented on it

I definitely care! I’ve bled crimson and blue my whole life and being in the military, I don’t get to see the Jayhawks play much. I’m currently stationed in Hawaii and even though I’ll probably be off the islands by the time the Hawks play there, it gives me hope…I think. :)

Nampa, folks in Hawaii care. So, is that Nampa, Idaho? Go mash some potatoes!

This game could have national championship implications. Haha.

You make fun, but in 2007 — it WOULD have. Both schools made the BCS as at-large selections.