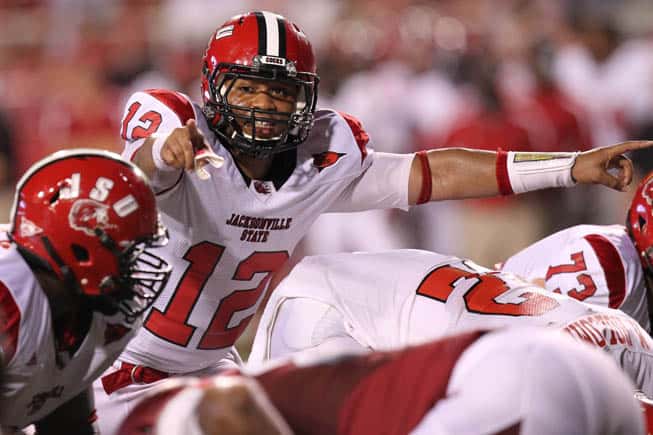 The Jacksonville State Gamecocks will travel to play the Auburn Tigers in 2015 and the LSU Tigers in 2016, JSU athletics director Warren Koegel announced on Tuesday.

JSU was previously scheduled to play at Auburn on Oct. 19, 2013, but the addition of Missouri and Texas A&M to the SEC resulted in the Gamecocks being moved off of Auburn’s schedule.

The Gamecocks will now play at Jordan-Hare Stadium on Sept. 12, 2015. It will be the first ever meeting between the two schools.

In another future scheduling change, Jacksonville State will not play at LSU on Sept. 5, 2015 as previously announced. Instead, the Gamecocks will visit Tiger Stadium in Baton Rouge on Sept. 17, 2016. JSU has never faced LSU on the gridiron.

Auburn does not yet have a season-opener scheduled for Sept. 5, which could be reserved for a rumored Chick-fil-A Kickoff Game match-up against the Louisville Cardinals.

Meanwhile, LSU continues to shuffle their future football schedules as a result of scheduling a neutral-site series with Wisconsin and other factors.

In 2015, LSU now only has two known non-conference games: Eastern Michigan on Oct. 3 and Western Kentucky on Nov. 14, both at Tiger Stadium.

Their 2016 slate is tentatively complete with the addition of Jacksonville State. LSU will likely open the season vs. Wisconsin at Lambeau Field in Green Bay on Sept. 3. The Tigers are also set to host Jacksonville State (Sept. 17) and South Alabama (Oct. 15).

LSU was previously slated to open the 2016 season at home vs. Southern Miss, but that game will have to be assigned a new date, postponed to a later season, or canceled altogether.

Yesterday, LSU associate athletics director Verge Ausberry was on The Buddy Songy radio show in Louisiana. Ausberry said that LSU is working on a home-and-home with a BCS school for 2015 and 2016, and the Tigers are also working to keep the Arizona State series as a home-and-home.

If in fact LSU does get a new home-and-home series and one of the games in in 2016, that would likely mean that the Southern Miss game or possibly the South Alabama game will be moved.

Yes they do. JAX is probably looking at around $1.5 million for all three games.