How Scheduling Has Contributed to Baylor’s Turnaround 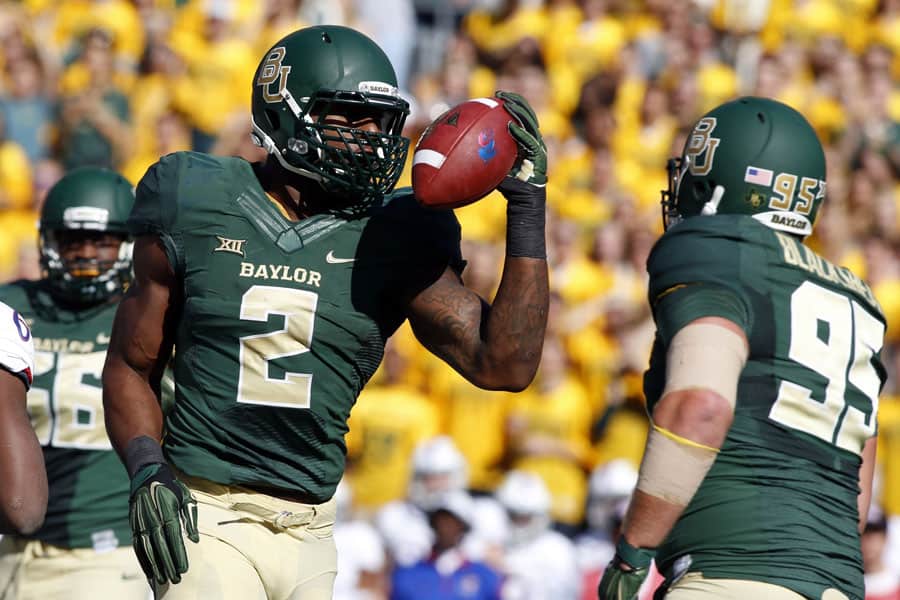 How did Baylor transform itself from a program that didn’t win more than five games from 1996-2010 to one that posted double-digit wins three of the last four years?

Though the hiring of Art Briles for the 2008 season is the most obvious answer, the Bears’ schedule has changed alongside their success.

While some of these tweaks were inherent to the Big 12’s shift from a two-division entity to one with only ten teams, others come down to a different approach to selecting opponents.

Drop in Number of Non-Conference Opponents

The Big 12 played its final championship game in 2010, when Oklahoma beat Nebraska 23-20 in Arlington. After that, the Cornhuskers and Colorado defected and the shrunken 10-member conference scrapped the division format.

Now every team would play every other team once, meaning league games rose from eight to nine. On the flip side, the number of non-conference games dropped from four to three. This left Big 12 schedulers with one fewer game that they could effectively control.

For Baylor, it’s one of the factors that signaled the end of it playing Power teams outside of league play.

Before the change, the Bears generally played one FCS foe, two teams from non-Power leagues and then one, or sometimes two, Power teams. Afterwards, they kept up with the FCS game and pair of non-Power opponents, but dropped the game with a bigger foe.

Elimination of Power Opponents Outside of Big 12 Play

Is it any coincidence that Baylor’s “breakthrough” campaign, its 7-6 run in 2010 which included its first bowl bid since 1994, was also the first of five-consecutive seasons that it didn’t play a Power team?

As mentioned above, this was helped along, in 2011, when the number of non-league games dropped from three to four, but despite that Baylor is the only Big 12 member that hasn’t played a Power team outside of conference play since 2009.

In 2008, the Bears went 4-8 with a slate that included games with Wake Forest (a loss) and Washington State (a win). While these weren’t heavy hitters, they were and are Power clubs. The balance of the non-conference schedule that year was FCS Northwestern State (a win) and UConn (a loss).

Since then, Baylor hasn’t played a team from a Power conference out of Big 12 play. It also hasn’t fallen under .500 again.

It’s only fair to mention that the Bears had a home-and-home with TCU in 2010-2011. Even though the Horned Frogs were ranked in the Top 15 for both games, they were Mountain West members. So while it represented a high-quality opponent, it did not count as a Power foe.

Departure of Nebraska in 2011

For Baylor, the exit of Nebraska to the Big Ten meant it no longer had to face a team it was 1-11 all-time against.

The Bears were 0-8 against the Huskers when both were Big 12 foes. The way the schedule worked the two schools played home-and-home games and then took the following two years off from 1996-2009.

Baylor’s only win over Nebraska came way back in 1956, part of a 9-2 season that included a No. 11 rank in the final AP and a win over No. 2 Tennessee in the Sugar Bowl.

Departure of Texas A&M and Missouri in 2012

Texas A&M and Missouri’s defection to the SEC had a similar effect for Baylor—it didn’t have to play programs it had struggled against in the Big 12 era.

The Aggies’ move was even more significant because Baylor had to face them annually, both teams hailing from the South division of the conference. The Bears only managed two wins over A&M in the Big 12 era, in 2004 and 2008, both in Waco. The last time Baylor won in College Station was a 20-16 triumph in 1984.

Drop in Number of Ranked Opponents

Since 2006, the number of Big 12 members included among the Top 25 teams has decreased.

On the one hand it’s a matter of numbers, fewer teams means fewer opportunities to place programs in the rankings. On the flip side, losing teams and gaining others means that the output teams produce can’t have remained the same.

On top of that, the members that have remained in the league have experienced peaks and valleys. Think Texas and Texas Tech, both hitting Big 12 era highs and lows during the time span.

The net effect for Baylor is that they’ve faced fewer ranked teams. Where the 2008 team (it finished 4-8) faced six regular-season opponents that were ranked when they squared off, the 2010 team (the 7-6 product) faced only four.

Did Scheduling Provide a Boost for the Bears?

Baylor has absolutely benefited from scheduling modifications, both those it had control over and those it didn’t.

The Bears did, for whatever reason, stop scheduling Power teams outside of conference play after the 2009 season. It’s no accident that this occurred at the same time as the beginning of the epic turnaround in results.

Next, Baylor benefited from, but had no control over, the changes in the Big 12. This included the exit of opponents it struggled against historically and the shift in the overall quality of the conference.

Though it’s all rock-solid evidence of scheduling changes resulting in more wins, the Bears have still had to play better against stiff opposition. To illustrate, take a look at what they’ve achieved vs. league heavy-hitters Texas and Oklahoma.

As for Oklahoma, before 2011 Baylor had never beaten the Sooners, dropping 20 straight all-time and 15 in Big 12 action. Since then, it has won three of the last four, the only loss coming, again, in 2012.

So while yes, scheduling has helped fuel the Bears’ epic rise to the top, it’s not the entire story.

They’ve also benefited from an unprecedented lull at Texas, injury-ridden Oklahoma, falling-short-of-expectations Oklahoma State, and chaos at Texas Tech. Sort of a imperfect storm, that statistically only happens every few decades. Odds are, all four of those programs will strengthen, and along with TCU and Kansas State, start giving Baylor the 6 losses that they are used to. Combined with the downswing of some of the XII’s major programs on the football field… not playing any reputable out-of-conference games is a sure ticket to understanding Baylor’s ‘turnaround’.

Baylor is pretty good now. The non-conference schedule has ensured they are at least halfway to bowl eligibility, but they still have to win games in the Big 12. Despite the fact that Texas has been down for the last 5 years and Oklahoma has not been consistently elite, other teams have improved. Kansas State has enjoyed another resurgence under Bill Snyder and Oklahoma State has enjoyed an unprecedented run or success. To say the Big 12 is weaker than it was when Baylor was winning an average of one conference game per year from 1996-2009, is a textbook case of selective memory. Remember, Oklahoma was down when the Big 12 formed and remember the John Mackovich era at Texas? Baylor arguably played in the easier division during the first four or five years on the league’s existence. Baylor was very bad until about five years ago, but they are pretty darn good now. Will they continue to strive when Art Briles retires or is lured away by a more storied program? Who knows. But Baylor is good now, and and schedule has very little to do with that.

Gotcha. Remember when I declared myself Linear Heavyweight Champion? It was the equivalent to the WBA and WBC Belts!

The Big 12’s shifts may have helped a bit (although, based on that logic, it should have helped other teams as well)… but Texas and OU both having down years clearly helped (probably more than almost any of the rest of this article outside of the fact that Art Briles is actually a pretty great coach). Still, any argument that actually claims that their soft OOC schedule actually benefited Baylor is off the mark.

Last year is the clearest example. Even a slight improvement to the OOC slate and there’s a decent chance that there would have been a different national champion, as Ohio State might have fallen short. (Although, “Ohio State” as a name definitely had more pull than “Baylor”, so that probably factored into things as well). But beyond even that, a stronger OOC game gives the team a bigger early-season goal to shoot for. As a Longhorn fan, I look back at the 2005 championship and point to the game at Ohio State as the only thing we heard from players all summer. They put in the extra time and effort and that made a difference that year. Yeah, we lost the return game the following year… you’re going to lose some games against big name opponents from time to time if you schedule them, but the benefits far outweigh the consequences. A loss to Ohio State the following year wouldn’t have eliminated us from contention. It wasn’t until we lost the last couple games of the regular season that year that we were knocked out.

Plus, as a fan, I’d far rather watch one good game and one bad game against a respectable opponent than sit through 3 boring slaughters to start the season every year. That’s not worth the price of the tickets or the donations for the new stadium.

Everyone has good points but the bottom line is this … regardless of how Baylor was able to win football games, the winning now has enabled them to recruit better talent and that is what will help the most in the long run.

Really, Baylor just followed in the footsteps of what fellow member Kansas St. did under Bill Snyder’s first stint. Play a weak non-conference schedule, get 4 wins and then slowly peck away in the conference to get better and better. It worked for KSU and it has worked for Baylor.

It worked great for KSU to get to an upper-middle team. I respect the hell out of Snyder for being a terrific coach, just like Briles, but those one-loss seasons might have actually meant a bit more if one of the wins (or losses) were against a tough OOC opponent!

To me it’s an easy fix…play two cupcakes like virtually Every team in country does and play an elite top 20 program. Example, Smu…Lamar…Arizona. How about Eastern Illinois…Georgia State…Home and Home with Georgia, etc. Not sure anyone could argue that approach.

Yeah, that’s a decent strategy. I’m still a fan of what UT has switched to (2 power-5 teams and none fcs “cupcake”) since it’s more exciting, but unless there are clear advantages or rules to support that kind of scheduling, many teams won’t. Still, one decent power-5 opponent is well worth it.

Baylor had another game in 2012 that was dropped. ND in New Orleans. One of the ND ‘Shamrock Series games. Probably mutually agreeable with ND because ND wanted to play an SEC team when they booked the Superdome. SEC TV contract would not allow that.

Just as the Big 12 TV contract would not allow ND to play a Big 12 team when they booked the Alamodome in 2009. Wound up playing Washington State. lol

Easy solution to that: stop with all the neutral-site crap and play a home-and-home!

Whatever the case, scheduling is a guessing game. SMU six years ago when June Jones was hot probably would have beaten Baylor. Scheduling out six years is just a guessing game. Duke would have been criticized on today’s Baylor schedule until their new coach. Think about those FCS teams that thought playing Mississippi State would be a “test” and possible win. Then along comes a good coach and they are looking at a top ten SEC opponent who plants 70 points on them. Teams go up and down. Briles is looking to make Baylor a consistent team who people will have to talk about and circle on their schedules or get beat like a drum if taken for granted. Someone scheduling Texas always knows that Texas has talent. Baylor now has talent and must be accounted for.