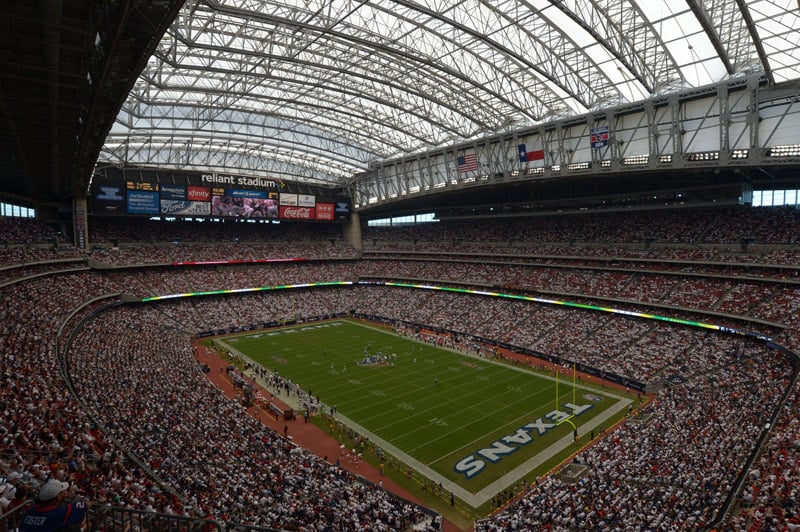 The Houston Cougars and the Oklahoma Sooners will open the 2016 football season at NRG Stadium in Houston, according to published reports.

Joseph Duarte of the Houston Chronicle first reported the news yesterday. His report was then confirmed by Brett McMurphy of ESPN.

The Houston-Oklahoma matchup would be the fourth annual AdvoCare Texas Kickoff. LSU and Wisconsin play this season and Texas A&M and Arizona State are scheduled to meet in 2015.

Houston is currently slated to open the 2016 season at Texas State, but they could move that game to a later date or postpone it. The Cougars are also scheduled to host Louisville at TDECU Stadium on Nov. 19.

Oklahoma also has a season-opener on the books — ULM at home on Sept. 3. Ohio State is also scheduled to visit Norman on Sept. 17.

LOL. That games is a dud for the Advocare Kick off. OU is top nothh program but Houston is an average at best mid major.

It’s hard to say that until you see what Houston does this year. They’re a contender for the Group of Five slot in the big-boy bowls. If nothing else, it will sell out between Houston locals and a really big OU fan base in Houston.

Not so fast my friend. Houston will be loaded with Seniors in 2016. Glad to see OU take the “gamble” and play Houston. At least OU has the nads to do so, unlike UT and ATM.

David: A&M playing UCLA that year and having played this game the year before vs. Arizona St. I think the Aggies did well for themselves. This game needed a Texas team and is still a step back from that A&M/ASU game. Getting OU was a win for the game but sounds like this came together last minute.

I like that OU has the guts to play us. Last time they caught us was in the beginning of the Briles era. Average Mid Major? Check out our history against the other old Southwest Conference schools. Don’t forget, we won that conference several times. There’s a reason that A&M and Texas avoid us but play Rice instead (look for Rice to give them a good accounting this year). Look what happened to their other conference schools when they did. I say congrats to OU and UH for bringing a good game to the NRG.

OU is playing Ohio State in 2016 – so if they wanted OU in the game – I doubt they would have convinced them to play an LSU or Alabama type. That schedule would be ridiculous. Houston is a solid mid major program… and it’s local. Helps OU’s exposure for recruiting in South Texas, and they have a moderate sized alumni base in Houston as well.

Not exactly a marquee matchup for the advocare kickoff though: power 5 vs. mid major however you dress it up.

David said….
Not so fast my friend. Houston will be loaded with Seniors in 2016. Glad to see OU take the “gamble” and play Houston. At least OU has the nads to do so, unlike UT and ATM.

Well Davey Poo playing Houston is just a cowards way out. Alabama will be playing Wisconsin, USC, and soon Notre Dame. When Oklahoma gets the boys to do that let us all know. OK

OU always has a marquee game with one of the major conferences.
Houston will only be the mid-major for the 2016 season to go along with Ohio State.

The future out of conference marquee home and home games for OU will be with:
Tennessee
Ohio State
UCLA
Nebraska
LSU
Michigan

I love you take a look back at the comments made before the season to just see the misunderstanding of what truly makes the NCAA beautiful, seeing somebody so confident in a power five school just because of who there were in the past, Houston is a solid football team and one that is going to give OU a hell of a matchup. May just be a “mid-major” in OU season but the “Marque” in little ole Houstons season. One that Herman has had marked on his calendar since sign the contract in 2014. But it will be beautiful to see the Big 12 powerhouse start 2016 0-1

What the hell are you talking about. OU has played Notre Dame twice, Alabama, Florida State Twice and Tennesse Twice plus Ohio State the next two years. Has LSU, Nebraska, Michigan in the future. We have beat Alabama three times in a row. Don’t give me this crap with Bama.

Houston is a top teer mid major program, so it OU taking all the risk in this game. And for that one OU hater/bad troll, OU is not afraid to play the “big boys” as any real college fan knows. But you know, as you said OU is taking the coward way out by playing Tennessee, Michigan, Ohio State, UCLA, LSU and Nebraska. Coming from a butthurt Bama fan, I am not surprised that even on this comment board you are trying to plead that Bama has the toughest schedule ever, with teams like Florida Atlantic and Southern Miss.

Yep ou now has a real first game on there hands with the coogs and osu. 2 weeks later.
I wonder what there thinking now

He needs to take a look at Oklahomas record versus the SEC. That will shut him up.