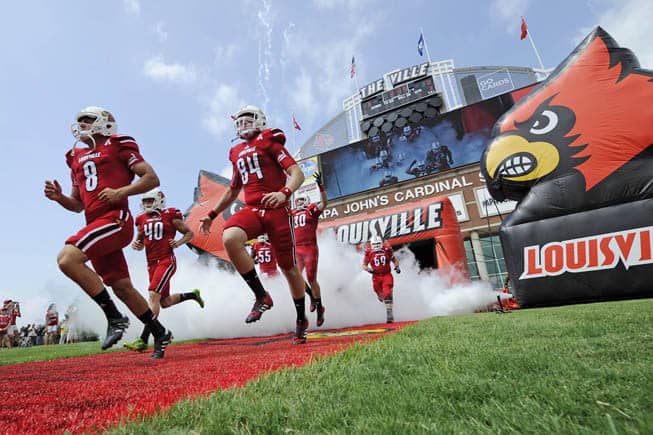 The Houston Cougars and the Louisville Cardinals have scheduled a home-and-home football series for 2015 and 2016, both schools announced today.

Houston will travel to meet Louisville at Papa John’s Cardinal Stadium on Sept. 12, 2015. The Cougars will then host the Cardinals at Houston Football Stadium on Nov. 19, 2016.

“We’ve been committed to scheduling quality opponents that reward our fans and provide great competition for our team. When you look at the success sustained by Louisville, we feel like we’ve covered those two factors,” said Houston Vice President for Intercollegiate Athletics Mack Rhoades. “We’ve had great competition with Louisville in the past as evident by the series record, and we look forward to keeping the spirited rivalry alive.”

Houston and Louisville have played 14 times and will meet for a 15th as fellow members of the American Athletic Conference on Nov. 16, 2013 at Louisville. The overall series between the two schools is tied at seven games each.

The Louisville series gives Houston two non-conference games for both the 2015 and 2016 seasons. The Cougars are also slated to host Texas State in 2015 and travel to face the Bobcats in 2016.

Louisville now has three non-conference games scheduled for each season. UL opens the 2015 season against Auburn in the Chick-fil-A Kickoff Game in Atlanta and travels to in-state rival Kentucky to close the season.

In 2016, the Cards travel to Marshall and host Kentucky. The Marshall contest was initially scheduled for the 2014 season but was pushed to 2016.