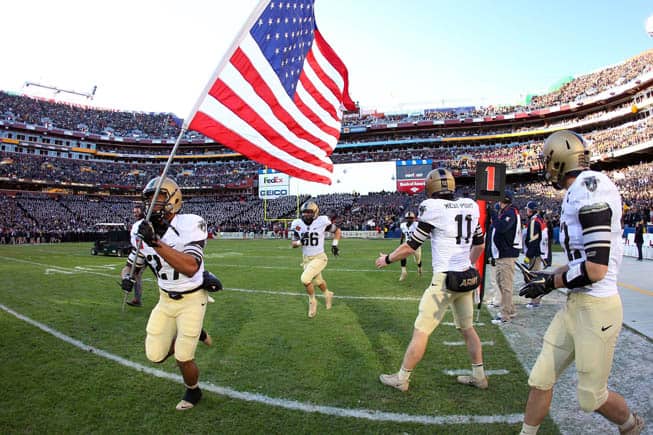 On Tuesday, the Department of Defense suspended intercollegiate athletics at all three service academies due to the government shutdown. That puts in limbo football games scheduled for this weekend for Army, Navy, and Air Force.

If the Air Force-Navy game cannot be played this Saturday, the two could possibly reschedule for December 7th. The Falcons are currently 0-4 in conference play, so it’s not very likely that they will qualify for the MWC Championship Game.

A cancellation of the Air Force-Navy game could affect the awarding of the 42nd Commander-in-Chief’s Trophy. The Trophy is awarded to the service academy with the best record against the other two academies each season.

The Naval Academy will make an announcement of the final determination on the status of their game against Air Force prior to noon on Thursday.

The Army-Boston College match-up is scheduled as BC’s homecoming game. If this contest is not played on Saturday, the two teams could possibly meet on December 7 provided that Boston College does not qualify for the ACC Championship Game.

However, Army will be playing at Hawaii on November 30 and in the annual Army-Navy game on December 14 in Philadelphia. Therefore, the Black Knights may want to preserve their off week between those two games.

A timetable for the final determination on the Army-Boston College game is not yet known, but Boston College Athletics Director, Brad Bates, did issue the following statement:

“We have been in close communication with Army athletics officials regarding the potential impact of the government shutdown on this Saturday’s football game. Obviously our intention is to exhaust all possibilities to play the game and we will communicate the information promptly as soon as we have resolution.”

Boston College also appears to have a backup plan if the game is cancelled, which might include scheduling a contest against Fresno State. The Bulldogs had their Sept. 14 trip to Colorado canceled due to flooding in Boulder. Fresno State is back down to 12 games on their schedule, but can play 13 because they travel to Hawaii.

We’ll keep you updated on the situation as information is released. Follow us on Twitter for the most current updates.

If the service academies cancel their seasons; what are thee future ramifications?

I the future it will be tougher for them to schedule non-conf games as there is the possibility that next time the two parties engage in a game of political chicken, that years slate might be wiped out as well. The budget deadline is always Oct 1, right when college football really kicks in. And while this may be a big worry over nothing, the other schools need to protect their own interests.

This is also a problem for the MWC as they need 12 active teams for the championship game. i imagine they can get a waiver this year; but it may be the break Idaho needs to return from the Sub Belt exile.

The AAC is also counting on Navy as a 12th team in 2015 and beyond so they may need to muster up a new member (Umass?? Buffalo??) as well.

Could but if heads are working will not.

what idiocy… equating the education of Officers of the future to a politiical event ! REALLY !