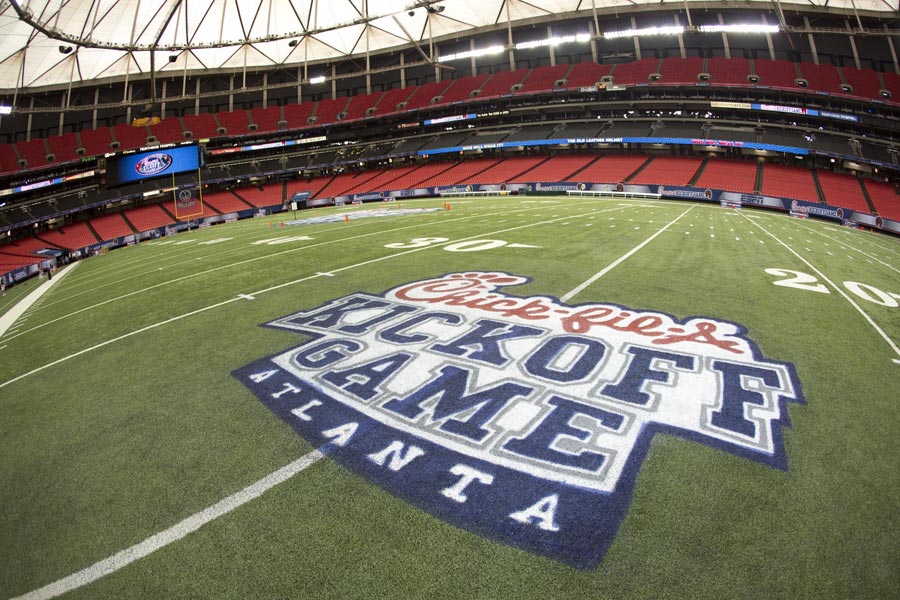 UGA and UNC will meet in 2016. (Paul Abell-USA TODAY Sports)

The Georgia Bulldogs and the North Carolina Tar Heels will meet in the 2016 Chick-fil-A Kickoff Game, it was announced today.

Georgia and UNC will face off at the Georgia Dome in Atlanta on Saturday, Sept. 3. An ESPN network will likely televise the game.

The two schools have met a total of 30 times and the Bulldogs lead the overall series 16-12-2. In their last meeting in the 1971 Gator Bowl in Jacksonville, Georgia defeated North Carolina 7-3.

North Carolina has one other non-conference game announced for the 2016 season: at Illinois on Sept. 10.

Below is more info from the official release:

“This will undoubtedly be one of the best games of the 2016 opening weekend and a long-overdue renewal of an old ACC vs. SEC rivalry,” said Gary Stokan, president and CEO of Peach Bowl, Inc. “Both programs have a rich tradition, devoted fan base, top-notch players and elite coaches – all elements of a blockbuster-type game that we can’t wait to host.”

“It’s great to have the opportunity to be back in Atlanta for the Chick-fil-A Kickoff Game,” said UGA J. Reid Parker Director of Athletics Greg McGarity. “It will also be a special time to rekindle a long-ago rivalry with North Carolina, a team we have not played since the Gator Bowl game in December, 1971. Georgia and North Carolina have played 30 times especially through the fifties and sixties and I’m sure it will be a very popular game among fans of both institutions.”

“I know our team, coaches, and fans will be looking forward to playing a quality opponent like North Carolina in Atlanta,” said UGA head coach Mark Richt. “It will be a national stage for a season opener and generate a lot of excitement for fans not only of both schools but college football fans around the country.”

“The Chick-fil-A Kickoff Game is a wonderful event and an excellent opportunity for our student-athletes to compete on a national stage,” said Bubba Cunningham, UNC athletics director. “It is one of the premier events in college football and Atlanta has always been a popular destination for our fans. It should be an outstanding environment in the Georgia Dome.”

“The Chick-fil-A Kickoff Game is a tremendous opportunity for our team to kick off the college football season on national television against an outstanding Georgia program,” UNC Head Coach Larry Fedora said. “This is also an exciting opportunity for our fans to travel to Atlanta and watch us play in an electric environment.”

The 2015 Chick-fil-A Kickoff Game will feature #25 Louisville against #12 Auburn to open the 2015 college football season Sept. 5.

Will Mack Brown be a sideline reporter?

Georgia continues to be one of the few SEC schools that is willing to stretch their OCC schedule. Pat-on-the-back to the Bulldogs once again for leading the way. There are another 9-10 schools in the SEC that could take a lesson or two from what Georgia is doing and has done. Nice Job Dawgs!

South Carolina opens with the goat in 2015.

Different matchup. Now if Georgia would start playing some more of these games outside of the region, something they haven’t done since 2011 and something they are not scheduled to do again until 2017.

I think it’s funny that people slam the SEC for their out of conference schedule, which they schedule pretty much exactly like everyone else has done (1 quality opponent, 2 FBS teams from non-Power Five conferences, and 1 FCS)… but now you have a team in the SEC scheduling TWO games against Power Five teams and people want them to go out of the region. Look, the south is full of great teams. You don’t have to go far to play someone good. It’s not the west coast or midwest where you really have to leave your region to play someone good. if you threw out the conference requirements, the Dawgs could play 12 of the best teams in the country and not get past one state away from Georgia.

Except there is plenty of reason to slam it. When you don’t play teams on the road and in most cases schedule 4 cupcake games, you should get slammed. There is another article on this site that basically calls them out on those schedules, as the SEC has 4 schools (more than any other Power 5 conference) that will not play a Power 5 school out of conference this year, Missouri, Ole Miss, Miss. State, and Vanderbilt. It’s made worse by the fact that the conference as a whole will only play 7 true road games and 2 of those are by Vanderbilt.

And UNC is a lower-half team in the ACC, so how are they as good as FSU, Ore, OH St or any top p5 program? They were just as good as SDSU, who finished 7-5 in the MWC, and lost by 30 to ECU, who finished 8-4 in the AAC. This doesn’t really qualify as a P5 game.

Nice match-up! SEC non-conference schedules would be comparable to other P5’s if they would play more home & home OOC games but they continue to schedule 7 to 8 home games each season and that is what gives them the edge.

Better rethink your observation, Bill! Might be a struggle for the Dawgs…

I wouldnt write off the Tar Heels, UGA will be a big favorite but the Heels have a lot of talent and one of the best coaching staffs in the country.