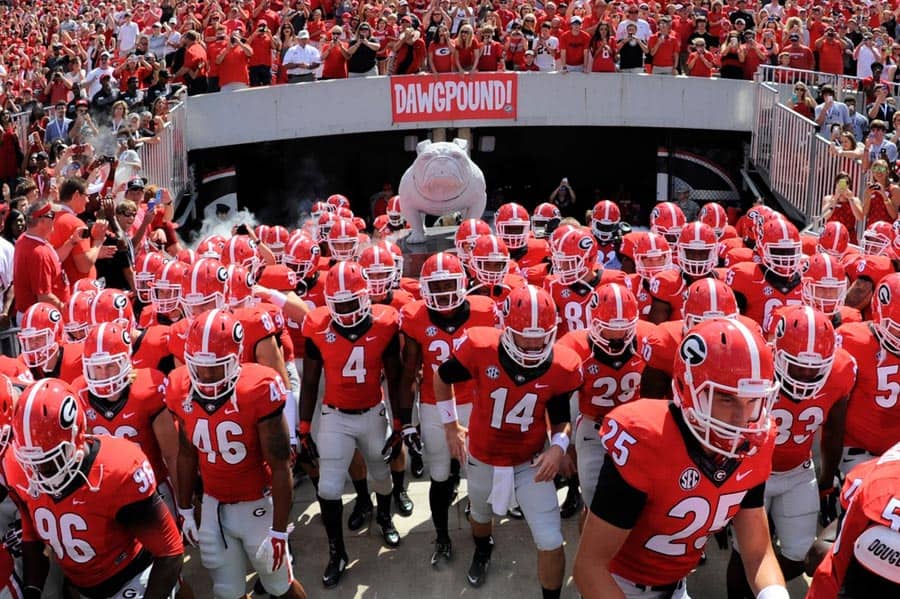 The Georgia Bulldogs have added the UMass Minutemen to their 2018 football schedule, both schools announced today.

Georgia will host UMass at Sanford Stadium in Athens on Nov. 17, 2018. The game will be the first-ever meeting between the two schools on the gridiron.

Per Matt Vautor of the Daily Hampshire Gazette, Georgia will pay UMass a $1.5 million guarantee for the game.

The Bulldogs now have two non-conference games set for their 2018 schedule. Georgia is also scheduled to host in-state rival Georgia Tech to close out the regular season on Nov. 24.

In SEC play in 2018, Georgia is slated to host Auburn, Florida (at Jacksonville), Tennessee, and Vanderbilt and travel to Kentucky, LSU, Missouri, and South Carolina.

“I am pleased we have scheduled a 2018 football game ‘between the hedges’ at Georgia,” UMass Director of Athletics Ryan Bamford said. “It will be a great experience for members of our football program and will provide us increased visibility against an SEC opponent in an area of the country where Coach (Mark) Whipple and his staff are recruiting prospective student-athletes. In addition, we are also thrilled to schedule a home-and-home basketball series with the Bulldogs in future years.”

UMass played their final season as a football-only member of the MAC in 2015. The Minutemen are now an FBS Independent for the foreseeable future until they find a new conference home.

As part of the agreement announced today, Georgia and UMass will play a home-and-home series in basketball in Amherst in 2017-18 and in Athens in 2018-19.

2015 was the last year UMass was a member of the MAC. They are independent this year

Someone is baking cupcakes…..

Yep all Big 10 members. They play each other which is pretty much cupcakes

UGA/Gator hater is officially changing his name to small 10 hater. Bozo’s like Jinzo need to feel the hate in every post. All they do is hate on the SEC so lets return the hate. Michigan fan this hate is not aimed at you but for the other 13 can’t count members of the very small 10 you are free game. Auburn. LSU, Florida and Alabama have something that only one small 10(14) team has in the 2000’s so keep hating!

What a shock that an SEC team schedules a powder puff. I would have more respect for Georgia if there was a return game at UMass (Gillette Stadium).

Did you say the same thing when about Wisconsin scheduling Western Kentucky recently?

I hate uga but did you look at who else they are playing?

Georgia is also scheduled to host in-state rival Georgia Tech to close out the regular season on Nov. 24.

In SEC play in 2018, Georgia is slated to host Auburn, Florida (at Jacksonville), Tennessee, and Vanderbilt and travel to Kentucky, LSU, Missouri, and South Carolina.

Really? One game against UMass and you flip out? Find me a small 10(14) team with a tougher schedule

It will be interesting to see how UGA approaches OOC scheduling now with Kirby Smart ad HC. UGA has been the only SEC team which started to regularly scheduling two OOC games with P5 teams. GT is always on the schedule. In 2013 and 2014 UGA played Clemson. In 2016 UGA plays UNC, 2017 and 2019 ND UCLA is on the schedule for 2025 and 2026.

South Carolina does this too Tully about as much as Ugly..sorry Uga

Small 10 it takes 2 to schedule… call Auburn, Tennessee, LSU Texas A&M. They are scheduling ACC and Pac 12 teams. Who is afraid of who? Other then Michigan & Wisconsin no Small 10 teams seem to be scheduling SEC teams. Haters like to hate

Umass…. Start scheduling Big Ten games. The SEC is fine for the south but, really, do you want to be associated with them