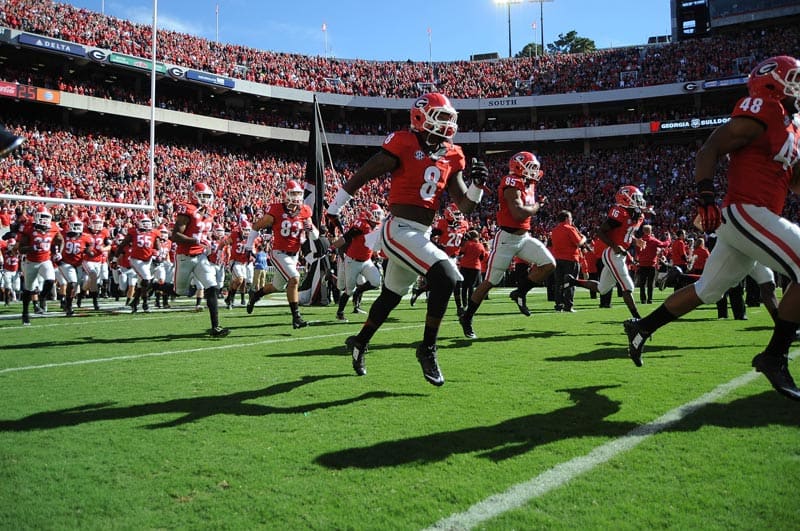 The Georgia Bulldogs have added the UL Lafayette Ragin’ Cajuns to their 2016 football schedule, according to a memorandum of understanding obtained by DogBytesOnline.

Georgia will host UL Lafayette at Sanford Stadium in Athens on November 19, 2016. The two schools’ only previous meeting was in 2010 in Athens, a game which Georgia won 55-7.

The Ragin’ Cajuns, members of the Sun Belt Conference, will receive a $1.2 million guarantee for playing the game.

Georgia now has three of their four non-conference games scheduled for the 2016 season. The Bulldogs are also slated to host Georgia Tech on the final weekend of the season (Nov. 26) and Nicholls State on a date to be announced.

SEC games for the Bulldogs in 2016 include Auburn, Tennessee, and Vanderbilt at home and Kentucky, Missouri, Ole Miss, and South Carolina on the road. Georgia will also take on Florida in Jacksonville on Oct. 29.

The addition of Georgia tentatively completes the 2016 non-conference football schedule for UL Lafayette. The Cajuns are also scheduled to open the season at home vs. Boise State on Sept. 3, host McNeese State on Sept. 10, and visit Tulane on Oct. 8.

Any news on the 2016 Florida St-Georgia game in Atlanta?

And awaiting to hear how Alabama completes its 2015 and 2016 schedules.

Nothing new to report.

Any chance that Georgia will renew their series with Clemson or is the need and greed for 3 cupcakes too much? As always the fans want is secondary.

Georgia pulled out of a series with Oregon.

However besides the annual GT game, the Bulldogs have scheduled a series with ND. And there is a possible two neutral site game series with Florida State. Georgia is doing better in non-conference scheduling versus their SEC comrades.

And Clemson has annual game with the Gamecocks, will play ND every three years, and has a series with Auburn on the books.

Both Mississippi programs and Missouri are struggling to put-together 2016-17 schedules.

The following P5 programs appear to have openings in both 2016 and 2017: Kansas St, BC, WF, Syracuse and Arizona.

So the Miss* schools might consider one of those five for home-and-homes.

It would be much easier if the SEC went to a 9-game conference schedule. But ego and stubbornness prevails in some corners.

ULL is way out of their league