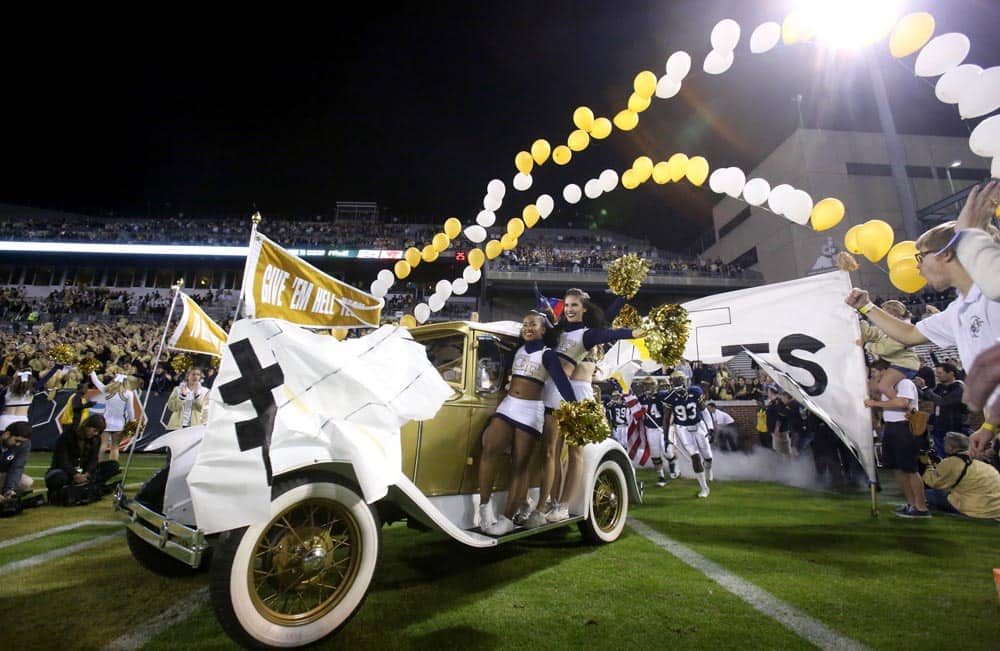 The Georgia Tech Yellow Jackets have announced the addition of Bowling Green in 2018 as well as several future football schedule changes.

Georgia Tech will host Bowling Green at Bobby Dodd Stadium on Sept. 29, 2018. The game will be the first-ever meeting between the two schools on the gridiron.

According to today’s announcement, Georgia Tech and USF will now meet on Sept. 8, 2018 at Raymond James Stadium in Tampa and then on Sept. 7, 2019 at Bobby Dodd Stadium in Atlanta.

Georgia Tech was originally scheduled to host Notre Dame on Oct. 19, 2019, but that game has been pushed back one season. The two will now meet in Atlanta on Nov. 14, 2020.

The final change to Georgia Tech’s future football schedules involves the Tulane Green Wave. After a recent contract change, the two were set to meet in Atlanta on Sept. 8, 2018 and in New Orleans on Sept. 7, 2019.

Georgia Tech announced today that the 2018 game vs. Tulane has been canceled and the status of the 2019 game at Tulane “is to be determined.”

Could it be the ACC is gearing up for 9 conference games?

Once again post after post since it is not an SEC team Maverick has nothing negative to say. If this was Tennessee. Ole Miss or Arkansas the rants would be epic.If you look at Tech’s past schedules they are horrible! No slight aimed at BGSU a fine football school, I just want to point out SEC bias from the likes of Maverick and Jinzo.

Having two scheduling models to choose from might make scheduling more complex for some ACC programs. ndeed some ACC programs have OOC rivalries (FlaSt-Fla, GT-Geo, Clem-SC, Louv-Ky, and Pitt is establishing rotating OOC rivalry with Penn St & WV). Whereas some don’t. And some ACC programs have ‘natural’ cross division rivalries and some don’t. And then there is the added complexity of scheduling ND to five games per season. If each program has the flexibility to play either 8 or 9 conference games, it will be difficult for ACC programs to know what the other ACC programs is doing, or is available or interested. Balancing out scheduling home vs road conference games as well as the strength of schedule will be difficult. ACC programs will need to get ahead of the curve in future scheduling and the ACC office will have to be super involved in helping to manage the scheduling process, helping to balance the strength of schedule throughout the conference, But I assume the ACC schools were accepting of the added scheduling complexity when the ACC made an agreement with ND. With that said I applaud moving in the right direction. Only if the SEC had similar will power,

I prefer how the Pac12 schedules their 9 game schedule, rotating 5 home games one year to 4 home games the following year. And rotating not playing two cross division programs for two years in a row. However the Pac12 arrangement often results in an an unbalanced SOS (eg the PNW schools get to play either USC or UCLA in the same year, not both).

The SEC are afraid to go to nine conference games. The SEC hierarchy is unwilling to travel outside of their region (as often as the other guys) and are addicted to the neutral site games and the home games against the SunBelt and FCS way too much for that to happen.

You just sound like someone else who comes on here complaining about nonsense with the SEC, no reason even to comment. Please look at past & future schedules of the SEC traveling outside they’re region, neutral games bring in large amounts of money, that’s why they are so popular & yes, I am pretty sure the SEC is very afraid to go to 9 games in there conference because that’s all it’s about is being afraid….please!