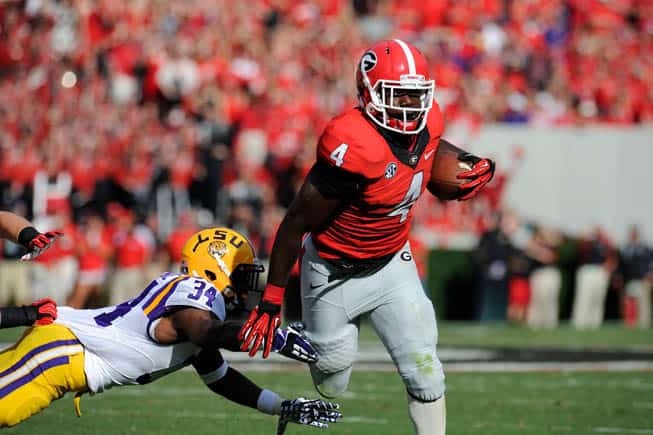 Georgia and Notre Dame could announce a future home-and-home football series in the next 24-48 hours, according to former UGA quarterback Buck Belue.

Back in April, Jeremy Fowler of CBSSports.com first reported that Georgia and Notre Dame were in talks for a series later this decade. Discussion on the series, which would likely take place in 2018 and 2019, were acknowledged by University of Georgia athletics director Greg McGarity.

“I think it’d be great for the University of Georgia if we were able to make it happen,” McGarity said.

McGarity later expanded on the Georgia-Notre Dame rumors at the SEC Spring meetings in Destin, Florida.

“I think it’s an opponent we’ve played, what, one time? 1980? For our fans to be able to go up to South Bend, and for our fans to see Notre Dame play between the hedges, I think from a national perspective it’d be off the charts, as far as interest, as far as intrigue,” McGarity said. “That would be something out of the ordinary that our fans would be very, very excited about.”

Notre Dame head coach Brian Kelly has been very outspoken about getting an SEC team on their schedule. Last year, he mentioned that Georgia would be a “natural matchup” for the Irish.

Then last month, Kelly went on Bruce Feldman’s podcast and, although he didn’t mention Georgia by name, it was obvious he wanted to play the Bulldogs.

“If you look around we’re in Florida already with Florida State, so I think you can probably figure out pretty easily what SEC (team) would be the best draw for us as it relates to recruiting and an alumni base,” Kelly said.

Georgia and Notre Dame have only met once on the football field — the 1981 Sugar Bowl at the Superdome in New Orleans. Led by Buck Belue and Herschel Walker, the Bulldogs defeated the Irish 17-10 in that game to claim the 1980 National Championship.

This is a good match-up if talks between these programs pan out, preferably the sooner they can make this happen the better. In my opinion, Notre Dame should play 2-3 SEC teams along with its 5 game set up with the ACC. Imagine a Notre Dame schedule looking like: Clemson, @Oklahoma, USC, @LSU, Georgia Tech, @Florida State, Georgia, @Ohio State, Louisville, @Miami(FL), Purdue, @Stanford. That would be a tough schedule for Notre Dame but if they had a winning record that year no one would be able to question that ND is a high quality program for that season. This is the type of schedule that would put the SEC schedules to shame.