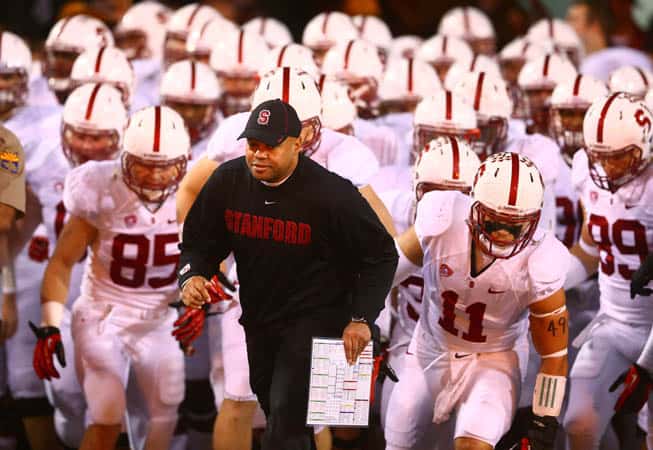 With the close of the 2013 college football season, it’s time to look at the final strength of schedule (SOS) rankings.

National Champion Florida State’s schedule ended up being ranked 34th or higher by each BCS computer that publishes SOS. Their highest strength of schedule ranking was from Kenneth Massey, who rated the Seminoles 34th.

Auburn was rated 18th in Phil Steele’s preseason rankings. Their schedule ended the season rated in the Top 10 of each BCS computer except Jeff Sagarin, which had them 13th.

Based on the computers, the Stanford Cardinal had the toughest 2013 football schedule at the conclusion of the season. Stanford’s schedule was rated first by Colley Matrix, Jeff Sagarin, Kenneth Massey, and Billingsley Report. Anderson & Hester rated their schedule 4th overall.

For comparison purposes, we have listed first the FBSchedules.com preseason Top 10 strength of schedule rankings along with Phil Steele’s. Click the title to view the complete rankings for each source.

We ranked Kentucky’s 2013 schedule as the toughest before the season started. It ranked anywhere from 14th to 47th in the final BCS computer rankings. We probably would have ranked Stanford around 11-15 before the season.

Florida’s 2013 schedule was ranked preseason number one by Phil Steele. Their schedule finished 9th in the Colley Matrix, but outside the Top 10 in the other computer rankings. Steele had Stanford in his Top 10 at number eight.

Arizona State had the toughest schedule according to Anderson & Hester, but the Sun Devils were not first in any other ranking. The Top 10 consists of five Pac-12 teams (1-4, 10) and five SEC teams (5-9). Florida State’s schedule is ranked 40th, while Auburn’s schedule is ranked 8th.

Continuing a pattern, Pac-12 teams occupy the Top 7 spots in Sagarin’s strength of schedule ratings. Stanford is ranked 1st, as they were in the Colley Matrix. Florida State’s schedule is ranked 62nd, while Auburn’s is 13th.

Stanford and Arizona State had the toughest 2013 schedules according to Kenneth Massey. The rest of the Top 10 includes two more Pac-12 schools, three SEC, and two Big 12. Florida State’s schedule is ranked 34th, while Auburn is 3rd.

Stanford is number one again as they are in each BCS computer that provides SOS rankings. Florida State’s 2013 schedule is ranked 38th, while Auburn’s is ranked 2nd.

In my opinion, Oregon has a pretty tough schedule. They play Mich. State, Stanford, and UCLA; all of which are predicted to be in the top 10 next season.

It’s a shame the national championship went to a team with such a weak SOS, should be a rule that you need to actually play REAL teams during the regular season.There were 4 or 5 teams out there that proved more to me than FSU did, hopefully the playoff system will weed out the lucky breaks and weak schedule hypes (FSU, Ohio State, etc).