FBS college football teams not playing an FCS opponent in 2021 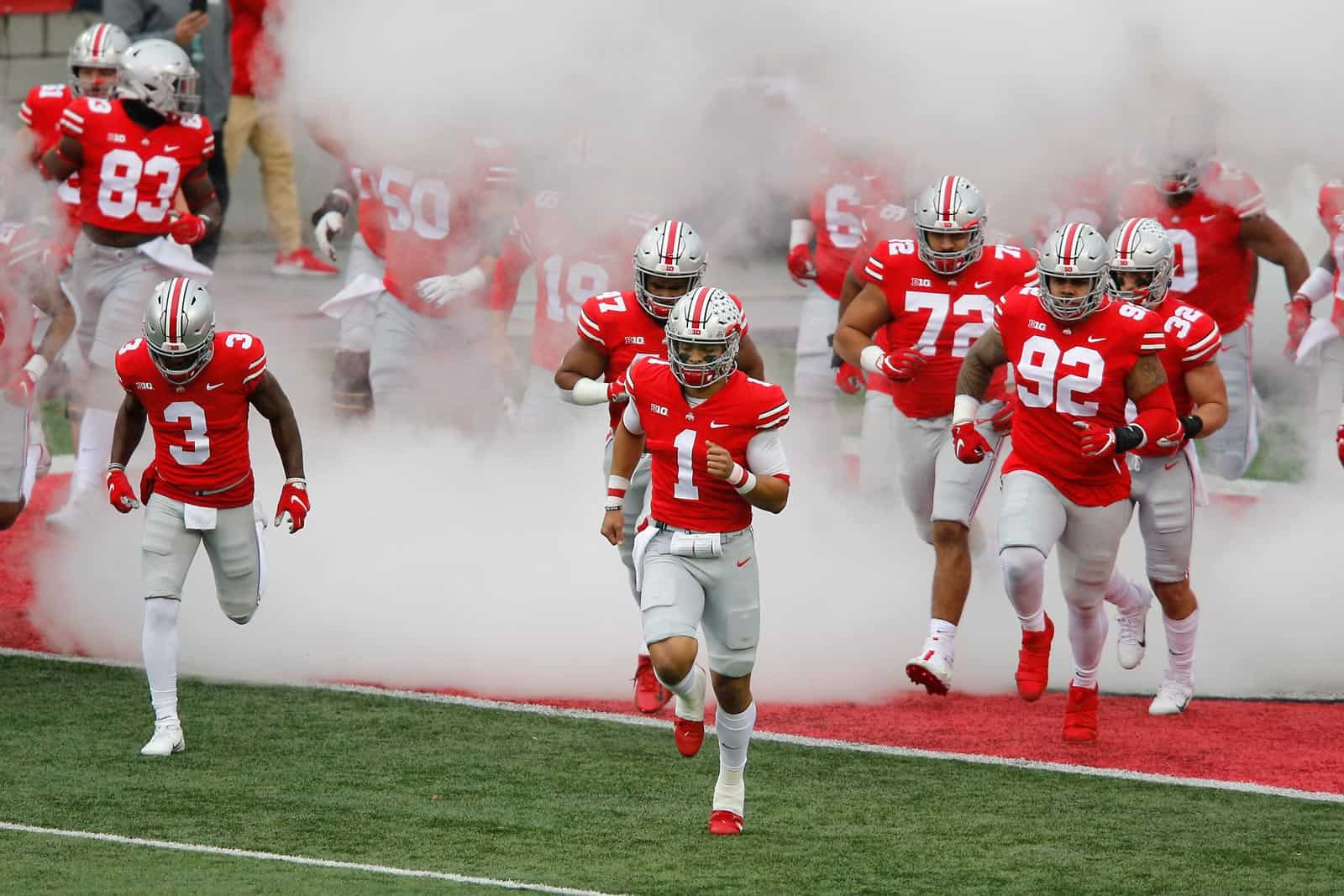 Of the 130 FBS programs set to compete in 2021, only 15 don’t have an FCS school on their schedule. It amounts to a mere 11 percent of the field not playing a program from the level down.

The honor roll consists of seven Big Ten programs, three from the Pac-12 and one representative apiece from the Big 12, American Athletic, Mountain West, Sun Belt, and Independents.

Out in the cold are the ACC, SEC, Conference-USA, and MAC, all of which have 100 percent of their member schools playing an FCS opponent this season.

One of only three Group of 5 members to make the honor roll, Boise State booked an FCS opponent as recently as 2019, beating Portland State 45-10 at home. That game ended a three-season run without an FCS program on the docket. The Broncos don’t currently have any future dates scheduled vs. FCS schools.

Even though last season marked the first time Georgia State hasn’t played an FCS foe since moving up to the FBS in 2013, that wasn’t the intention. The Panthers’ pre-pandemic schedule included an opener vs. Murray State that was never played. That fact makes 2021 the first season that Georgia State has intentionally avoided facing an FCS opponent as an FBS team. Moving forward, the Panthers have future dates booked with Rhode Island (2023), Chattanooga (2024), and North Carolina A&T (2026).

The first of seven Big Ten programs listed, Illinois had an FCS opponent scheduled as recently as last season when it was set to open vs. Illinois State, a game that was never played due to the pandemic. After booking an FCS foe every year from 2006-16, the Illini have – as per the Big Ten’s dictate – gone to an every-other-year format. Its most recent action came in 2018, when it survived 34-14 vs. Western Illinois. Future dates include Chattanooga (2022), Eastern Illinois (2024), Southern Illinois (2026), and Illinois State (2028).

Like Illinois, Iowa was slated to open the 2020 season vs. an FCS foe – in the Hawkeyes case it was Northern Iowa, another game lost to the pandemic. Also like the Illini, Iowa’s last action against an FCS opponent came in 2018, a 38-14 win vs. Northern Iowa. To complete the circuit, the Hawkeyes played an FCS school every season from 2007-16. Iowa’s future FCS opponents include South Dakota State (2022) and Illinois State (2024).

This is Michigan’s eleventh-consecutive season without an FCS opponent. It’s last such game was in 2010, a 42-37 near miss vs. UMass, which was still two years from leaving the FCS Colonial for the FBS MAC. The year before that, in 2009, the Wolverines destroyed Delaware State 63-6. It marks the only time they’ve played FCS opponents in back-to-back seasons since Division I-AA (which was rebranded as the FCS in 2006) was formed in 1978. Michigan has no future plans to play an FCS school.

Minnesota was slated to host Tennessee Tech last season, yet another game that was never played. It’s most recent FCS-free schedules came in 2017 and 2018, also the only back-to-back occurrences since 1997 and 1998. The Golden Gophers have future dates with Western Illinois (2022) and Rhode Island (2024).

The only American Athletic member on the honor roll, Navy was scheduled to host Lafayette in 2020, its third-straight FCS foe. Prior to taking 2017 off, the Midshipmen had booked an FCS foe every season since 2006 and played two such opponents in 2003 and 2004. Navy has Delaware scheduled for 2022 and Bucknell is on deck in 2024.

Notre Dame hasn’t played a program from a level down since Division I-AA (now the FCS) was formed in 1978. The last time the Irish squared off with a team considered a “non-major” at game time was in 1941 when it travelled to Carnegie Mellon (in Pittsburgh) and blanked the Tartans (currently a Division III program) 16-0. There are no future plans to play an FCS program.

Ohio State has been FCS-free since 2013, when it pounded Florida A&M 76-0 in Columbus. Prior to that it was the 2008 season opener, a 43-0 drubbing of Youngstown State, who it also opened with in 2007. This trio of exceptions marks the only times the Bucks scheduled an FCS team since the top division split in 1978. OSU has no future dates vs. FCS programs on the books.

Purdue hasn’t played an FCS foe since kicking off the 2016 season with a 45-24 win over Eastern Kentucky, also its sixth consecutive year to play such an opponent. The Boilermakers are slated to break their five-year FCS-free streak next season with a game vs. Indiana State, which they also have dates with in 2024 and 2026.

Stanford was slated to open last season against William and Mary, a game that never was. The meeting would have marked the first time the Cardinal played an FCS opponent since 2018 when it scored a 30-10 win over California-Davis. Stanford currently has three consecutive FCS foes on the books – Colgate (2022), Sacramento State (2023) and Cal Poly (2024). It’s a notable shift for a program that has never played an FCS program in back-to-back seasons.

Texas hasn’t scheduled an FCS opponent since 1992, when it hosted North Texas (which was still three seasons away from moving to the FBS) and won 33-15. It also faced the Mean Green in 1988 (a 27-24 win) and 1983 (a 26-6 victory), making North Texas the only FCS foe the Longhorns have ever played. Texas has no future FCS dates booked.

Like Notre Dame, UCLA hasn’t played an opponent that was considered an FCS/D-IAA school since college football’s top division split in 1978. The last time it faced a program that was considered a “non-major” at game time was 67-years ago, in 1954, when it opened with a 67-0 win over the team representing the San Diego Naval Air Training Center. The Bruins have historic plans in place to break their long FCS-free streak next season vs. Alabama State and then in 2023 vs. NC Central.

Like its cross-town rival, USC hasn’t ever played an FCS/D-IAA team. It’s most recent action against an opponent considered a “non-major” came in 1952, when it too hosted the boys from San Diego Naval Air Training Center, resulting in a 20-6 victory. Unlike the Bruins, the Trojans have no future plans to play an FCS opponent.

Some credit to Illinois and Purdue for at least playing in-state FCS, to the credit of state taxpayers.
.
And also UCLA doesn’t deserve shade thrown at them for choosing HBCU teams to give payouts to. If you’re going to play an FCS school, benefit your state taxpayers, or make a reparative move.

Whats the difference in playing an FCS team than a mediocre FBS team from a step down conference? Thanks to those 115 schools playing FCS schools and thumbs down to those who don’t. Kudos to the ACC, SEC, C-USA and MAC.

Well researched and objectively written. My personal opinion is that it is not always wrong to play an FCS opponent. Rather, such an opponent should be selected for reasons other than just an easy win (and of course, sometimes the FCS team does win, otherwise, why play the game).

To clarify, Northern Illinois is not a FCS school, they are in the MAC, as stating under the Iowa future scheduled games.

Writer made a mistake, that’s been removed.

Texas played SHSU in 2006. Created a huge huff in the area.

I disagree, about lower level FBS teams being the same step down. FBS schools have more scholarships, money, resources available etc etc. While FCS teams win more often against group of 5 teams, many of them still end up losing by a wide margin. Having lived in Northeast Ohio the majority of my life, if my son were offered by Akron, Kent, Ohio, Bowling Green, and Youngstown State, I would say choose one of the MAC schools because of the higher competition. This is coming from a Youngstown State graduate who was a non-revenue sport athlete.

Also my favorite team to root for is Notre Dame who I support having never played an FCS opponent. I say next year they offer UCLA a chance to join them at Jerryworld for a Shamrock Series game rather than play an FBS opponent and find someone to play Alabama State, while offering to do home and homes with Alabama State in mens and womens basketball, volleyball, baseball, and softball. Also they could pay for their Track and Cross-Country teams to come to Notre Dame for invitationals. Notre Dame needs one more game for 2022.