Conferences Least Likely to Play Each Other in 2014 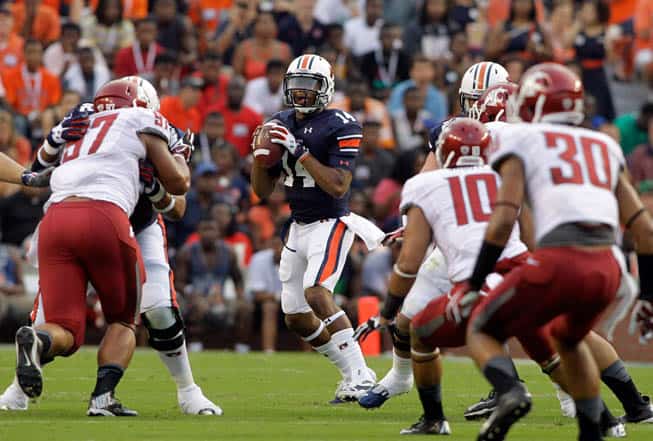 Last week we highlighted which conferences will play one another the most frequently this season, which leads naturally to the question—which leagues won’t face-off in 2014?

Whether its geographic sensibilities, history, or a simple case of avoidance, the following list pinpoints the conferences that either won’t square off in the regular season this year, or those who will meet only once.

These are the league vs. league matchups we’ll have to wait until bowl season to see.

Not only will the Big 12 and Mountain West not meet in 2014, they haven’t squared off in the regular season since 2012 when Texas and Texas Tech both had their way with New Mexico and the Longhorns also beat Wyoming.

The lack of Big 12 teams taking on Sun Belt members in the regular season this year isn’t indicative of the past. Last season featured four meetings between the two leagues, all wins for the Big 12: Baylor-ULM (70-13), Oklahoma-ULM (34-0), Kansas State-UL Lafayette (48-27) and Texas Tech-Texas State (33-7).

Upcoming Big 12-Sun Belt matches include a single meeting between Oklahoma and ULM in 2016 and a home-and-away series between Iowa State and Arkansas State in 2024/2025.

The Pac-12 vs. SEC drought in 2014 is short-lived, a good thing for college football. The two power leagues met as recently as last season—when Auburn topped Washington State and Tennessee fell to Oregon—and have plenty of future dates on the calendar.

No SEC program has squared off with one of the four current independent teams in the regular season since 2011 when Ole Miss fell to BYU 14-13, South Carolina nipped Navy 24-21 and Vandy took care of Army 44-21.

The next scheduled SEC-Independent matchup is a 2017/2019 home-and-away series between Georgia and Notre Dame.

The only regular-season game in 2014 between a Big 12 member and an Independent is a Sept. 6 showdown between BYU and Texas in Austin.

The Longhorns are 1-3 all-time against BYU, all four meetings have been in the regular season with Texas’ only win coming in a 17-16 victory in Austin in 2011. Big 12 members hold a narrow 70-60-1 (54%) all-time advantage over current Independents.

The only regular-season game this year between the Big 12 and Pac-12 is s Sept. 13 clash between Texas and UCLA at AT&T Stadium in Arlington, Texas.

Not only have Washington and Georgia State never faced each other in football, the Huskies have never squared off with an FBS team from the state of Georgia. The Pac-12 is a perfect 11-0 against current members of the Sun Belt.

This season will mark only the 19th ever meeting between the Pac-12 and the MAC, a Sept. 6 game between Colorado and UMass at Gillette Stadium in Foxborough, Mass.

The Buffaloes and Minutemen have never met each other on the football field and Colorado is 2-1 all-time against MAC teams. The Pac-12 is 15-3 (83%) all-time vs. MAC programs.

The only Pac-12/Conference USA game on the 2014 regular-season slate is a Week 2 showdown between Arizona and UTSA at the Alamodome in San Antonio.

If you’re interested in tuning in for a Pac-12/American Athletic game in 2014, mark your calendar for Sept. 6 when Memphis will travel to Los Angeles to face UCLA in the Rose Bowl.

The Bruins and Tigers have never met in football and the Pac-12 holds a 54-36 (60%) all-time advantage over teams from the new American Athletic Conference.

The American Athletic and Sun Belt’s single regular-season game this season is a Week 5 contest between Texas State and Tulsa at H.A. Chapman Stadium in Tulsa, Okla.

The Golden Hurricane and Bobcats have never played each other in football but Tulsa is 9-8 (53%) against Sun Belt opponents. The teams that combined to form the American Athletic in 2013 are 111-73-6 (60%) all-time against Sun Belt members.

The only Mountain West/MAC fixture on this season’s slate is a Week 3 game where Northern Illinois will travel to face UNLV at Sam Boyd Stadium in Las Vegas.

The Huskies and Rebels have met three times in history, all in the regular season. Northern Illinois is 3-0 against UNLV, the most recent win coming via a 62-14 win in 1995 in DeKalb, Ill. The Mountain West holds a 67-38-2 (64%) all-time advantage against the MAC.

Georgia State did not become a member of the Sun Belt until 2013.

When someone refers to the stick of Georgia “Southern” then they sure as heck are not talking about “Georgia State” or “GSU.”

It might be interesting to look at which FCS conferences the FBS schools tend to schedule. I’m guessing the Southern and Colonial would make up most of the ACC and SEC schedules while the Big Sky would probably be the conference of choice for the Pac-12.