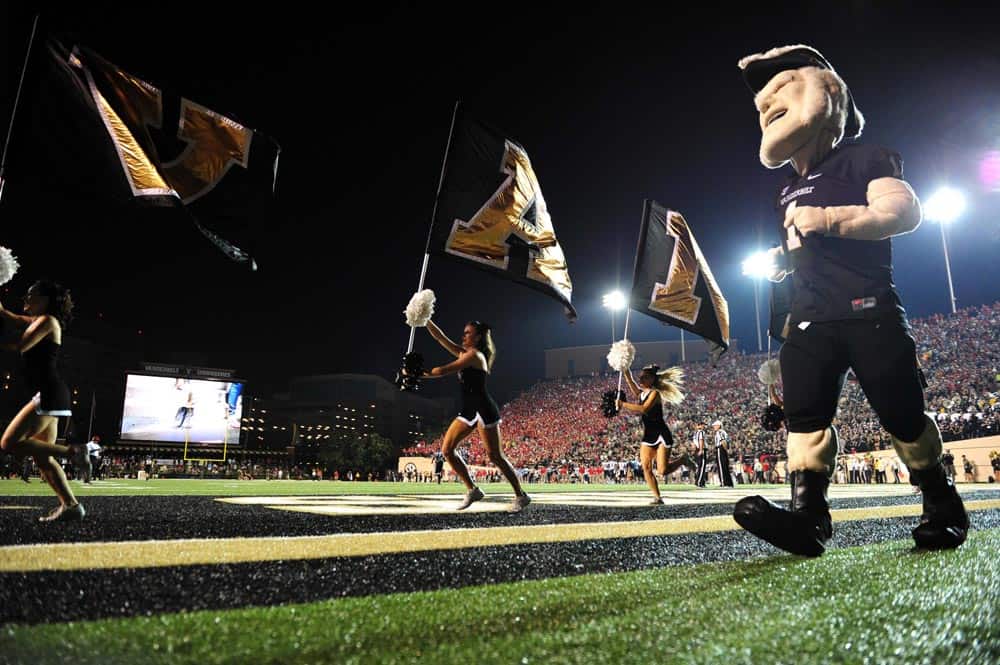 The Colorado State Rams and the Vanderbilt Commodores have scheduled a four-game football series that begins in 2020, the two schools announced on Thursday.

The series will kick off in Nashville with Vanderbilt hosting Colorado State on Sept. 26, 2020. Then on Sept. 11, 2021, the series will shift to CSU Stadium in Fort Collins.

Four years later, the series resumes at Vanderbilt Stadium on Sept. 27, 2025. Colorado State will then host Vanderbilt on Sept. 26, 2026 to close out the four-game, home-and-home series.

Colorado State and Vanderbilt have never met on the gridiron.

“We have high goals and aspirations for our program, to provide our students with the experience of playing against the best possible competition during their time as a Ram,” said CSU head coach Mike Bobo. “At home and away, our team and our fans can anticipate an aggressive approach to scheduling future opponents.”

Colorado State is currently 2-12 against current members of the SEC. Their lone wins came over LSU in 1992 and Missouri in 1997, although Mizzou was in the Big 12 at the time.

Vanderbilt is 2-3 against current members of the Mountain West Conference, and all five of those games were played against the Air Force Falcons between 1976 and 1982.

It’s sad the Vanderbilt schedules a harder non-conference schedule than the most of its conference. This includes the entire SEC West.

The entire SEC West is almost an NFL Division Mav. Maybe Alabama should schedule the Cowboys and LSU could play the Texans.

Maverick you hate on Ole Miss when they schedule a Power 5 and praise Vanderbilt when they don’t. Wow!

Exactly! Ole Miss plays 1 non-conference power 5 game each year. Just one! It’s embarrassing. There should be no reason why a team that has less than a .500 record in conference play should be playing in a bowl game. NONE! Instead, their coach should be fired. In the SEC, if you go 2-6 in conference play, you can still go to a bowl game by going 4-0 against the likes of Alcorn State, UL-Lafayette, Southern Mississippi and Coastal Carolina. Disgusting!

Once there is polarity in college football, people will stop complaining.

Look at Vandy’s schedules those years, dumb dumb. Notice how they already have the 1 required non conference Power 5 game. Still, it’s not enough. We want a minimum total of 10 power 5 games. Until there isn’t polarity and balance, we won’t stop complaining.

You can complain until your head explodes. I don’t think it will change anything.

Who is we? Do you mean you? I disagree, I think Vandy has done a fine job scheduling OOC being they’re Vandy. They also added Ga. Tech, WF, NCST & Purdue, not bad.

Day,
That’s my point. Vandy has a harder schedule than most of the SEC. It’s embarrassing.

No it is not your point, here is the full sentence:

“Still, it’s not enough. We want a minimum total of 10 power 5 games. Until there isn’t polarity and balance, we won’t stop complaining.”

That’s my point, you complain even when little Vandy has a good schedule & mention how it’s not good enough.

You can make multiple points.
1.) Vandy has a tougher OOC schedule than most of the SEC.
2.) The SEC has the weakest OOC schedule by far.
3.) The SEC takes advantage of a loophole in college football to play the easiest path to the CFP.
4.) You play 8 conference games. Everyone but the ACC plays 9.
5.) As such, because you have 14 teams, you will most likely have an extra 7 wins added to your conference. Example; instead of LSU playing South Carolina, LSU instead plays Troy. That’s all but certain a guaranteed win.
6.) Your newly required Power 5 game is half the time at a “neutral” site down south.
7.) You think Arkansas is good when they lost to Toledo and Texas Tech last year.
8.) The year Mizzou won the SEC East, they lost to 0-8 Indiana.
9.) The SEC EAST has by far a way harder schedule than the SEC West. It’s not even close. The SEC East always tries to play 10 Power 5 games compared to the SEC West that play the easiest possible OOC schedule.
10.) Not all FBS wins should be equal, but beating Troy is the same as beating LSU.
11.) Now, individually speaking, I understand why certain teams know their team is great. Having gone 7-1 in the SEC is a great feat no doubt. However, because they play 1 less conference game and the easiest non-conference schedule, their conference has at least 1 extra win each year. Because of this, the ESPN SoS makes it look like the SEC has the toughest SoS (Strength of Schedule).
12.) Alabama would have been in the CFP regardless. They are the undisputed champs and a great team over the years.
13.) I’ve heard all of your arguments. They don’t hold up.
14.) SEC coaches will fight with vigor not to have 1 more conference games (like they’ve always done from when they play 6 conference games, 7 conference games, and now 8)
15.) We would know the SEC is the greatest conference if they played an equal schedule with the other Power 5 teams and then beat the shit out of the other conferences in the bowl games. Unfortunately, the match-ups will continue to be off.
16.) Unfortunately, none of this will make any difference to you, despite the writing being on the wall.