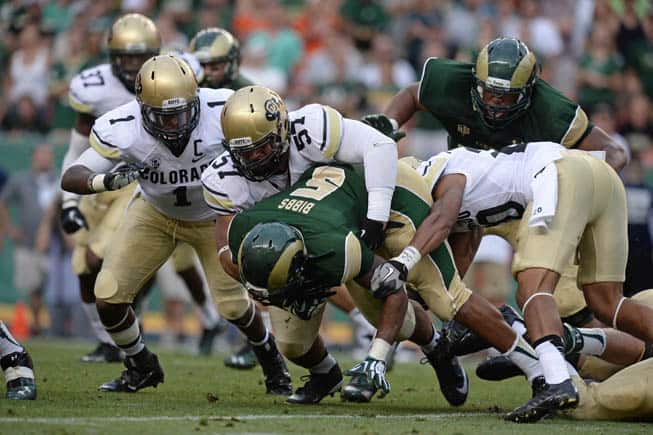 The Colorado-Colorado State football game has been moved to Friday, August 29 to accommodate a national television broadcast, both schools announced today.

The in-state rivalry, known as the Rocky Mountain Showdown, will be televised by either an ESPN or FOX Sports network.

“This is a great opportunity for fans in Colorado to kick off Labor Day weekend with a rivalry football game on Friday night,” CSU head coach Jim McElwain said. “I think it’s outstanding that people get to watch a great game and not break up their holiday weekend.”

Colorado and Colorado State are in the middle of a ten-game contract to play their annual rivalry game at Sports Authority Field at Mile High in Denver. The two schools also met in Denver between 1998 and 2003 and from 2006 through 2008.

“This is good for our program on many fronts,” CU athletic director Rick George said. “We open the season on national television on a night where there’s very little competition, it’s a great start for our fans to the Labor Day Weekend as they can enjoy the full three days of the holiday, and the team will have an extra day of rest and preparation ahead of us making the longest road trip of the year when we travel to Foxboro the next week to play Massachusetts.”

Colorado and Colorado State have met on the gridiron a total of 85 times since their first meeting in 1893. The Buffaloes have dominated the overall series, leading 62-21-2 and winning eight of the last eleven.

The Friday, Aug. 29 game this year will be the second-earliest the two schools have ever played. Each game through 2019, except 2015, will be played on college football’s opening weekend.

Just out of curiosity, is there any particular reason why Colorado & Colorado State are not playing on college football’s opening weekend next year?

probably b/c CU is still cash strapped so they took the game 13 vs Hawaii option for 2015 which will bring them another home game.