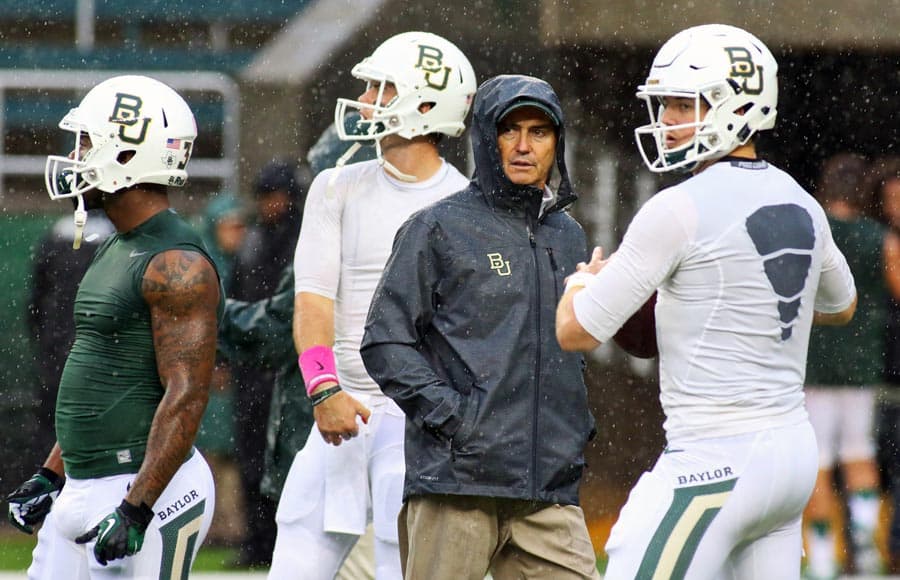 Every Monday, the five power conferences announce their football TV schedule for the weekend after next. Some selections are also made by the American, C-USA, MAC, MWC, and Sun Belt. Today, selections were announced for the weekend of Nov. 14, 2015.

The remainder of times and TV for the weekend of Nov. 14 are listed on our main College Football Schedule.

I’m guessing it will be Memphis Houston under the branding of AAC on ESPN.

There’s a reason why the games are listed as TBA. Oklahoma St-TCU is a toss up. Navy could upset Memphis, and Cincy could upset Houston.
Also, one of those B12 games is gonna be on FOX at 3:30 most likely.

FOX is not showing an afternoon game on the 14th. Memphis and Houston will not be a Prime time ABC game.

The B10 has no night games, they typically avoid them in November. ABC has rights to ACC, B12, AAC games they could put prime time. AAC is not getting prime time, they only reason Temple got it was they were playing Notre Dame, in conference game not a chance. ACC has Clemson/ Syr and FSU/ NC State as possibilities but OU vs Baylor is a much better game and will be 2 top 25 teams. Also, I believe there is some clause in the deal with b12 that they must get a a certain number of games on ABC, they have not gotten a prime time game yet as it’s been alot of B10

Youre right about FOX not having the 3:30 slot.
ESPN currently has 11 slots open (4 at noon, 5 at 3:30/4, and 1 at 8 PM), 3 of which will be big ten games that will either air at 12 or 3:30. That leaves 8 slots open. Out of the remaining TBAs, they’ll probably take 3 ACC games, 1 American game, and 3 big 12 games. ACC Network will take the last ACC TBA, FS1 will take the last B12 TBA for their NOON slot, and CBSSN will take Temple @ USF for their 7 PM slot.
It seems that Baylor/Oklahoma and Houston/Memphis are frontrunners for the primetime ABC slot (it might depend on where College Gameday goes). Whichever doesn’t get ABC 8 pm will get ESPN or ESPN2 7 PM.

I think Houston-Memphis could be the ABC Saturday night football game. It can’t come from the SEC, Big 10 or Pac-12, and none of the ACC games look like a prime time network matchup. They must be hedging their bets on the Baylor QB situation – if it was already set for Baylor-Oklahoma, they wouldn’t have used the 6-day, and I don’t see a second option other than Houston-Memphis.

Hi, my name dh metcalf, I did read all the replies, and I’m just grateful to have a tv to watch it on. I’m not entitled to anything but living, so my thanks to those that do what they can, so I do have games to watch. Match ups don’t matter to me anymore, it’s college football: anything happens anyway, there are upset’s all the time. I’m appreciative to have games to watch. College football season flies byeee too fast anyway. Thanx again for the games that y’all do show, regardless of the matchup, much appreciated.