College Football Teams with Most True Road Games in 2014 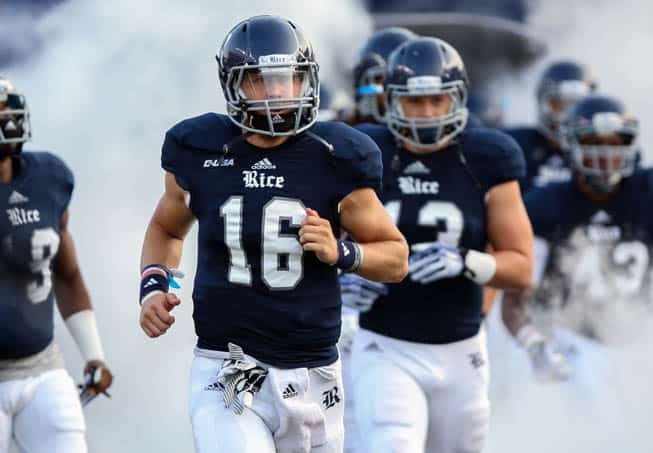 Earlier in the week we highlighted the 15 FBS teams with the fewest road games in 2014. The other side of the home vs. away equation is programs which will spend the most time traveling this season.

Each of the 10 teams mentioned below will play seven true-road games in 2014, meaning they’ll spend 58 percent of the season away from home.

Though there won’t be asterisks in the win/loss column, reminding us of the disproportionate number of road games these programs played, it serves as a reminder that all schedules aren’t created equally.

It’s no surprise that there aren’t any representatives from the power-five conferences on this list. Scheduling is yet another way to draw the line between the haves and have-nots in the FBS.

Florida Atlantic will play in front of its home crowd in Boca Raton, Fla. just five times in 2014.

The Owls’ road schedule is a doozy: at Nebraska, at Alabama, at Wyoming, at FIU, at Marshall, at North Texas and at Middle Tennessee.

The Bulldogs posted an amazing 10-3 road record from 2011 to 2012 under Sonny Dykes, but dropped to 2-4 last year in Skip Holtz’s first season at the helm.

In 2014, Rice has one of the most difficult opening three weeks in the FBS: a trip to Notre Dame for the opener, a bye in Week 2 and a short trip northwest of Houston to play Texas A&M in College Station in Week 3.

The balance of the Owls’ road slate this season is at Southern Miss, at Army, at FIU, at Marshall and at Louisiana Tech.

The Eagles lost all seven of their road games last season and haven’t won an away game since nipping Western Michigan 29-23 in Kalamazoo on Nov. 17, 2012.

The Huskies’ road line-up for 2014 consists of games at Northwestern, at UNLV, at Arkansas, at Eastern Michigan, at Ball State, at Ohio and at Western Michigan.

This season SJSU will have its work cut out for it with road trips to face Auburn, Minnesota, Wyoming, Navy, Fresno State, Utah State and San Diego State.

Even though 2014 is Georgia Southern’s first-ever year in the FBS ranks—it joins as a Sun Belt member—it will play seven road games.

Georgia Southern’s 2014 campaign will be considered a transitional season. They can compete for the Sun Belt title in 2014, but will have to wait until 2015 to be eligible for their first-ever bowl appearance.

After the WAC disbanded its football operations in 2012, Idaho spent 2013 as an independent and joins the Sun Belt in 2014 where it will hit the road seven times.

The Warhawks’ 2014 road slate is no picnic: at LSU, at Arkansas State, at Kentucky, at Texas A&M, at Appalachian State, at New Mexico State and at Georgia Southern.

Utah State’s % isn;t so bad as they’ll use the Hawaii exemption to get a sixth home game.

Tough road for all these teams.

Also you gotta like their odds on the road this year. They could be favored in every game, with maybe an exception at Boise State. I look for the Aggies to improve on last year, especially with a healthy QB.

SJSU has a rugged road indeed….this is where depth really has to come into play. The Spartans are breaking in new offensive starters pretty much everywhere but tailback. Playing NC runner up Auburn for your first road game,not a easy task….

I wish the NCAA would crack down on the “Power” 5 conferences and rule that they can’t play more than 6 true home games. It is just another way these little guys get screwed.

To Greg—On the contrary it is the way most small FBS programs balance their athletic budgets.

That’s right. SJSU is getting $1.5 million for its 2014 game at Auburn and probably just under a million to play at Minnesota this year.