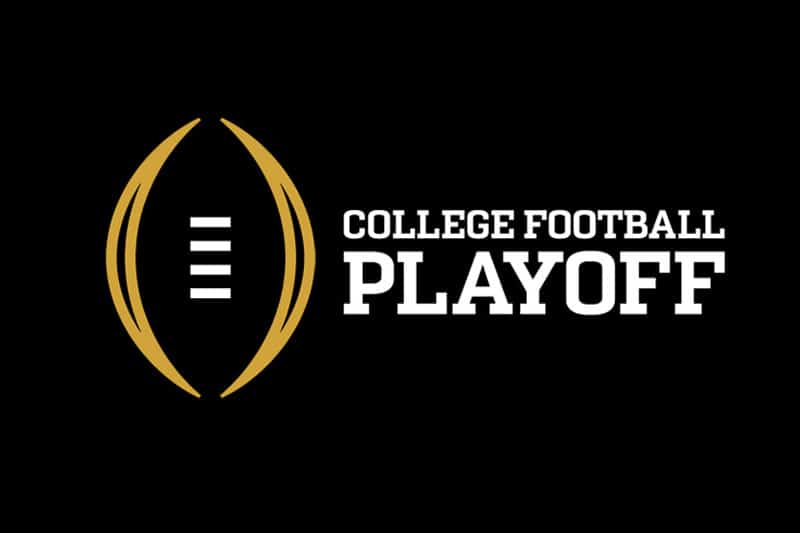 The College Football Playoff Top 25 Rankings for Nov. 18 have been released and the Alabama Crimson Tide are the new number one team.

Alabama rose to the top after knocking off previous number one ranked Mississippi State 25-20. Alabama is followed by Oregon (2), Florida State (3), and Mississippi State (4). Just outside the top four are TCU (5), Ohio State (6), and Baylor (7).

“It’s been an exciting year so far and we’re not done with the excitement yet. The discussions the 12 members have each week is detailed and thorough,” said selection committee chairman Jeff Long. “Even though we don’t yet know who the conference champions are – and that is a factor we will weigh in December – this committee has been clear that quality of wins and strength of schedule are important factors.”

The College Football Playoff Selection Committee will release their Top 25 rankings each week on Tuesday through Dec. 2.

At 2:45pm ET on Dec. 7, the committee will announce the Cotton, Fiesta and Peach Bowl pairings, as well as the final top 25 rankings. They will also announce the pairing for the Orange Bowl.

The top four is extremely likely to change with TCU and Ohio State lurking together with the fact that a loss by any of them will out them. If a one loss Big 10 Champion or Big 12 champion is not in, this four team format is not for long.

The committee did well.

I always hear fans of teams in the B10 and ACC making this argument. But, why should winning a weak conference be rewarded as opposed to finishing second in a strong conference?

Bill, Well first of all I’m a PAC 12 guy and College Football as a whole. My argument with my statement is simple, “If you can’t win your conference, you’re out of the running for the National Championship”. Allowing two PAC 12 schools or two teams of whatever conference you’re a fan of takes away from the importance of the regular season and lessens it in my opinion. Think if you “had to win” your conference to be considered, it would be like “Playoff Saturday” every Saturday. There’s got to be some importance to winning your conference and not just padding your record with beating the little sister of the poor & blind. We in the PAC 12 have had a nine (9) game conference schedule for many years now and determine a true Champion, where as who really knows who’s the Champion in a Conference like the SEC, it’s a crap shoot with the way they schedule and manage their schedule.

Because the Committee is required to heavily consider having won a Conference Championship.

That’s my Top 10 CFB Rankings. Florida State hasn’t lost and shouldn’t be punished for being the defending National Champions. I’m not mad at Mississippi State being #4 but eventually I think Ohio State would overtake them. The Final 4 is most likely Alabama, Oregon, Florida State & Ohio State.

If the top 5 keep winning, Buckeyes aren’t jumping anyone. All 5 teams control their future. TCU and Baylor on the outside looking in

the committee is actually doing a pretty good job but if they really are concerned with Strength of schedule Florida State and Ohio State should be lower.

If that’s the case, then Miss. state should also be lower. They have only 1 win against a currently ranked team and that team has 3 losses, compounded by the fact that they played absolutely nobody out of conference.

I think it comes down to the committee picking the team with the best lose. Yes FSU is undefeated & knows how to have comeback wins but are also playing in a weaker conference & are only a couple of plays away from losing three games. FSU is in the top four which is all that matters. I also think the strength of schedule comes from the SEC with-in, we knew the west division teams would start knocking themselves out by other better west teams, as of right now Bama still has Auburn to go in order to get to the SEC Championship. Miss St has Ole Miss, it is not over.

Day, I believe you’re right in saying it’s going to come down to who has the “best” lose. You mentioned Florida State is only a couple of plays away from 3 loses, well you we could say that about Alabama as well if you look at the Arkansas, Mississippi St and LSU games and as well Bama’s cross over games of Florida and Tennessee are nothing really challenging so the conference argument is a little “iffy”. Mississippi State’s cross over games of Vanderbilt and Kentucky are even more questionable as making them play in a tough conference, so they’ll be lots of ways to view and debate who’s the top four.
I have always wanted the eight team format with; The Five Power Conference Champions and Three At-Large bids. Would take a whole lot of the arguments away and lessen the biases put positive and negative towards certain conferences and our perspectives.

You’re insane if you think Ole Miss had the toughest OOC. They played no P5’s and a FCS school.

I’d have to agree with schoup, in that you’re crazy if you think Ole Miss had the toughest schedule. No Power 5’s on the non-conference schedule. I’d only put their schedule ahead of Baylor and Miss. State’s.

Hey Boys, I’m not saying Ole’ Miss prior to going into this 2014 season had the toughest schedule, I’m just saying now that we’re about 10 games into this year they have played the toughest of the ten. How would you rank them? I see “schoup” thinks only Miss St. and Baylor are lower, but…. Please don’t forget, I’m only discussing the Non-Conference portion(s) of these teams schedules and with the knowledge of what has occurred thus far. Perhaps I am “insane” or “crazy”, but I’m trying not to be blind and biased in my opinion. Sometimes the facts tell us things we don’t want to hear or realize….

Or the facts skew the truth and just tell us what we want to believe. Yes, the non-conference opponents for Ole Miss have nice records, but none played in a Power 5 conference, none were played on the road. UL Lafayette is 7-3 with its only non-conference win being against FCS Southern. I’d give more credit to UCLA for playing no FCS teams and of their 3 non-conference games, 2 were on the road against Virginia and faux neutral site game with Texas.

WHAT?!?! Well, I can say I honestly didn’t expect that

Billy, what you drinking man? The records of the OOC opponents is your primary factor on who has the toughest OOC schedule? If that’s the case then Marshall and Florida St should be playing for the natty. NOT!

Miss and Miss St should be punished for their horrid OOC schedules. Just as Baylor should be. Now and next season as well. Include Arizona, Kansas St, Washington, NC St and Penn St in that bunch. Those P5 programs should have scheduled home-and-homes with each other. But since they did not they all deserve some firm discipline from the deciders.

Winning all your games should be more important than strength of schedule if you are going to try and compare two teams with different records. You can use strength of schedule to differentiate between two teams with the same record but not if they are different. It’s a joke and the committee should be ashamed of what the have started. Now it doesn’t matter if you win as long as people think you have played a tough enough schedule. Playing in the ACC and playing Oklahoma St., Notre Dame & Florida means in no way shape or form that they aren’t deserving of being the #1 ranked team. I don’t give a sh*t how well those teams that they have played this year have ended up turning out. But all you guys, you know if I’m talking about you, keep on hating.
And you can’t use they almost lost three times as why they shouldn’t be #1. Football is about who makes the most plays and who makes the fewest mistakes. Games every week are decided exactly like this. The more you try to analyze things that can’t be measure the bigger of a hole you are going to dig yourself in. I just read a comment of someone saying the Big12 in 3 yrs has four teams with two bye weeks, but the rest of the conference teams only have one. Hey you guys that isn’t fair either. Who cares…. Honestly ridiculous.
FSU, Alabama, Oregon, ???
I definitely think at this point in the season that Miss St can be ranked number four but if it were the end of the season I would be pretty upset seeing them in the four spot after just loosing to Bama. Whether they lost at home or away. As Saban has said, sure you guys like him (haha), “the playoff has already begun if you are in the SEC, If you loose you are basically done.” Whether Miss St wins or loses I don’t think they deserve a shot in the playoffs. Sorry, great run but you lost a little too late. Loosing early and getting better should mean something. I guess I hope OSU gets in.

Partrick said “You can use strength of schedule to differentiate between two teams with the same record but not if they are different.”

You really believe that or are you just trolling? If the former then there is not much hope. If the latter, please stop it.

I don’t have the time to waste myself by posting comments I don’t mean and I hope you don’t either. So don’t go wasting my time calling me out with your stupid 3 line posts that don’t even make sense. Don’t go taking me to the extreme. I didn’t say that an undefeated Marshall deserves a chance at FSU. That is taking things to the extreme. But yes I would have to say that if almost any of the teams in the P5’s were to go undefeated and if no one else was they would be deserving of a shot in the playoff and a #1 ranking. In this case, yes the ACC may be having a slightly down year or it could be they are kind of beating each other up with a lot of overlooked teams. And yes since FSU is undefeated and have played OSU, ND, & Florida. Without a doubt they deserve to be #1. It is not up for us to decide. It’s about how you play and how you finish. Finish a game that is. And that is all they have done is “finish”. They have finished all 10 of their games this year and the last 26 they have played. And you are gonna argue that they shouldn’t be #1. Because you guys wanna debate over something meaningless and not measurable. Ask evey coach in the nation what their main goal going into the season is. That is to finish games. It doesn’t matter how you start the only thing that matters is how you finish and if you win. They have and no one else has. Therefore they deserve to be #1.

What about the Florida Gators