College Football Playoff to expand to 12 teams beginning in 2024 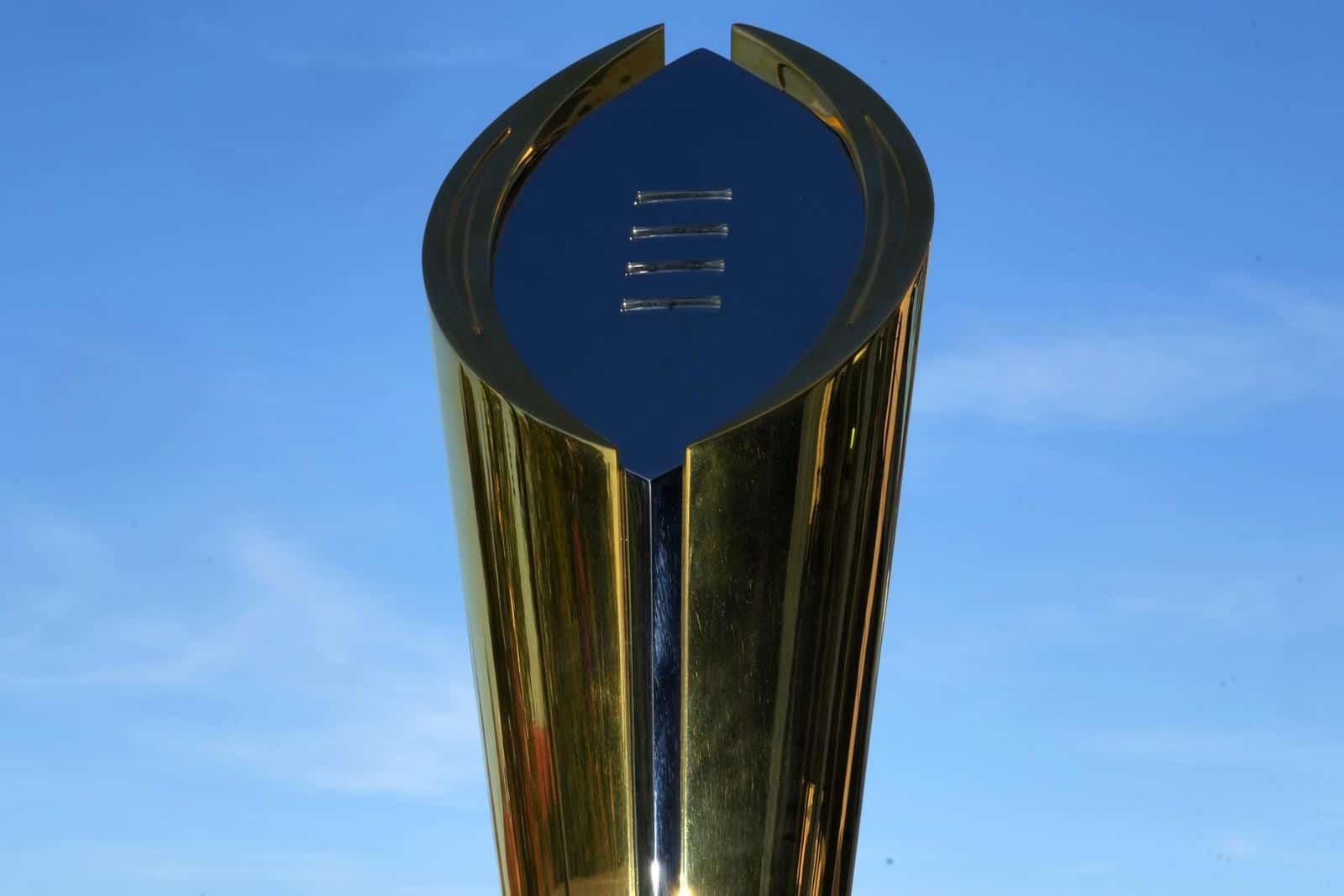 The College Football Playoff will expand to 12 teams beginning in 2024, it was officially announced on Thursday.

The new 12-team playoff was initially announced in September with a start date for the 2026 season. A few hurdles remained in order to kickoff the new format in 2024, which were cleared up this week. Chief among those was an agreement with the Rose Bowl.

“We’re delighted to be moving forward,” said Bill Hancock, Executive Director of the College Football Playoff. “When the board expanded the playoff beginning in 2026 and asked the CFP Management Committee to examine the feasibility of starting the new format earlier, the Management Committee went right to work. More teams and more access mean more excitement for fans, alumni, students and student-athletes. We appreciate the leaders of the six bowl games and the two future national championship game host cities for their cooperation. Everyone realized that this change is in the best interest of college football and pulled together to make it happen.”

Below is information on the new format from the College Football Playoff release:

2. For the 2024 and 2025 seasons, the four quarterfinal games and two Playoff Semifinal games will be played in bowls on a rotating basis.

3. The 2024 quarterfinals will take place in the Fiesta Bowl, Peach Bowl, Rose Bowl and Sugar Bowl, while the Cotton Bowl and Orange Bowl will host the Playoff Semifinals.

4. The 2025 quarterfinals will take place in the Cotton Bowl, Orange Bowl, Rose Bowl and Sugar Bowl, while the Fiesta Bowl and Peach Bowl will host the Playoff Semifinals. Specific dates for all quarterfinal and semifinal games will be announced at a later time.

“On behalf of the Management Committee and the Board of Managers, this is thrilling,” Hancock added. “It’s been a long process, but we are pleased that more teams and more students will have the opportunity to compete for the national championship beginning in the 2024 season. A new era of college football is about to begin. I look forward to it.”

“This is a great day for college football,” said Mark Keenum, President of Mississippi State University and chairman of the CFP Board of Managers. “I’m glad we are able to follow through and launch the expanded playoff early. It’s very exciting for schools, alumni and everyone involved.”

The 12-team format should divide the bracket along the Mason-Dixon Line.

The top 6 teams in the final CFP rankings from the South as defined by the US Census Bureau (that includes Maryland) would compete to fill one berth in the CFP title game in the Bowden bracket.

The top 6 teams from outside the South would compete in the Osborne bracket to fill in the other title game berth.

Why? If your point is to have a bit of competative balance or to adjust for biases toward the SEC or whatever, it seems like there are better rules to do that? Maybe place an upper limit on how many teams once conference can get in at 3 or 4…? But if the point is just to make a bit more of a rivalry out of the north and the south… I’m not sure that really is great for anyone?

It’s too bad I can’t post GIFs in the comments section here.

I feel that if that a Southern team really wants a CFP title, they have to go through a team from the other side of the Mason-Dixon Line every single time.

Combine that with sometimes holding CFP title games in cold-weather venues and we got competitive balance in college football.

I feel like you use the term “Mason-Dixon” line way more on this sight than is relevent in almost any aspect of modern life. Acting like Maryland is significantly “southern” at this point in time in any way relevant to college football (I mean… weather? politics? team demographics?) is… odd. Maryland is more similar to northern schools at this point, no? Iowa feels like it could play along as a southern school, weather aside. And… I mean, the line you’re referring to didn’t ever really extend across the whole country so you’d basically just be making it up beyond Iowa. I think there are lots of ways to say that teams should have to play a wider range of teams, whether in the playoff, or in conference or non-conference play, and I’m pretty strongly for having to face some good teams out of your conference in some form or another, but this feels… incredibly arbitrary? Like… if you’re saying there’s a bias towards certain southern teams, I’m in and up for making rules that help balance that, but again, this doesn’t feel like it’s just about that. Also, if you continue the line along the same general lattitude, aren’t there just more major teams (i.e., teams in the power 5 conferences) south of there? I mean, unless MAYBE you’re just literally talking about “free states and territories” vs “slave states” where California would count as being in the North? In which case, yikes, that would really feel like this was about something other than college football, and while I think remembering history is important, this seems like would be a weirdly irrelevant way to do so.

Also, I’ll be honest… I don’t care about Bobby Bowden. Was he a great coach? Sure. Do I think that my Longhorns owe him any particular tip-of-the-cap by naming the half of the playoff that I hope my team eventually (*sigh*) might get into after him? Nah. He was a big name in Florida (and West Virginia). What’s that have to do with me?

I’m here for the cold-weather venue title-game thing though. I think a limiting factor will be that these kinds of events REALLY want to minimize the chance of postponement or cancelation for money reasons, since a lot of these venues get used for pro teams which limits flexibility for date changes. And TV is pretty meticulous about setting exactly the time and date they think will work best for them. I also wonder if even the teams who play up north really want to spend their holiday break in the icy north anyway. But sure, I’ve always loved seeing my team play at Nebraska or Iowa State or Kansas during a snowy game. I guess it helps a little that I was a student during a period when the Longhorns always seemed to play well for cold away games even though conventional wisdom said they shouldn’t. Bring it.

It all does make me wonder which team you’re a fan of though. It seems like that would likely be a key part of why this is such an important distinction to you.

OK: how about for the G5’s, the top three rated go to playoffs provided they are in the top-20 of the final CFP rankings.

I agree with your Idea that Dependent Five Conferences shouldn’t be excluded which is How the Trust Five Conferences have worked, lobbied, bought, bludgeoned, bullied with $$$$$ the mythical 1A College Football Championships.

The Bowls are not the Origin of a Playoff System. The Bowls had & have different Goals than meritocracy.

The 1AA FB Championship “Subdivision” set up a Playoff System that rewards every Game of the regular Season.

The regular Season is 11 Games long.

Prior to the 2006 Season, 1A F “Bowl” Subdivision Programs played the required 11 Games. Additional Games played were optional, not “denied”, “not allowed” as opposed to the current Trust Conferences lobbied for Bylaws: 12 Games only, unless you’re playing @ U. Hawai’i.

The 1A F Bowl S changes back to the pre-2006 11 Game schedule. Starts the last Week of August.

1A Teams play All 1A Teams.

Teams are ranked by the CFP Committee from August through the 3rd Weekend in November.

The 1st Round of the 12 Franchise Playoff is Thanksgiving Weekend.

The Quarterfinals are the 2nd Weekend in December.

The Semifinals are the 3rd Weekend in December.

The Championship Game is the 1st Weekend of January. ( After the Christmas, New Year’s Season)

I like pretty much everything about this. 12 teams is great. Home (or chosen) sites for the first round is great. The 5 power conference champs plus 1 more conference champ getting guaranteed spots is great. Some other teams getting in is fine. The trade-off that Notre Dame can still avoid joining a conference (which they really should have to do) but that there’s no path for them to get a bye as a top-4 seed is… acceptable.

Everything else is great. But that extra L could really screw over conferences.

>>”Why would conferences want to play a championship game…”

You think the conference gets more money from a conference championship than they’d get from having multiple teams in the playoffs? I couldn’t answer that 100%, but I know that the payouts for the big bowls are… well… big. And especially in the era where players can transfer to where ever, and NIL money matters… having more teams with a chance to play for the national championship is going to be a big deal.

I could be totally wrong, but… being a conference with 2 or 3 (or more) teams in the playoffs seems like it would offset any value a conference championship game provides. The “Answer: $$$$$$” also applies to “why would you want to participate in a 12-team playoff?”

I would hope that conferences get rid of their CCGs after this, they’ll be pretty useless. For example, the FCS doesn’t have CCGs (with the SWAC being the lone exception) because their playoffs are so big.

Not happening, they make the big conferences a lot of money.

Jeff, CCGs bring in more money than having an extra team in the playoffs for the P2 SEC and B10).

I should point out, I’m not really talking about the SEC. Chances are that the Pac 12, Big 12, and ACC will be the ones that would be most affected by this. MAYBE some group of 5 conferences once in a while. I envision an annual scenario where all 3 of those confereces top out at 2 or 3 that are within range of possibly getting into the playoff… and then there being a pool of SEC teams just waiting to take over the “runner up” playoff spots after the conference championship games.

Assuming the SEC goes to no-divisions, 2-teams-with-best-conf-records-SEC-CCG, the second place SEC team will always have the benefit of the doubt AND the conference is generally unbalanced enough that the top several teams get a ton of wins. (I’m saying all this as a fan of a team that will be in the SEC soon).

The Big 10 will probably always get a couple too, though they usually seem to have more of a gap after the top 2 or 3.

This year the Pac 12 could possibly get lucky… their bad teams were reeeeal bad, so there were a few more teams over there that had impressive-looking records, but the loser of Utah/USC would likely be screwed. But I imagine it would be a pretty reliable thing for any conference aside from the SEC and possibly Big 10… your second place team might look great, but if they lose in the CCG, there will be 5 SEC teams waiting to take your spot. While, if you didn’t play that extra game, you’d get another team in the mix.