College Football Playoff to expand to 12 teams beginning in 2026 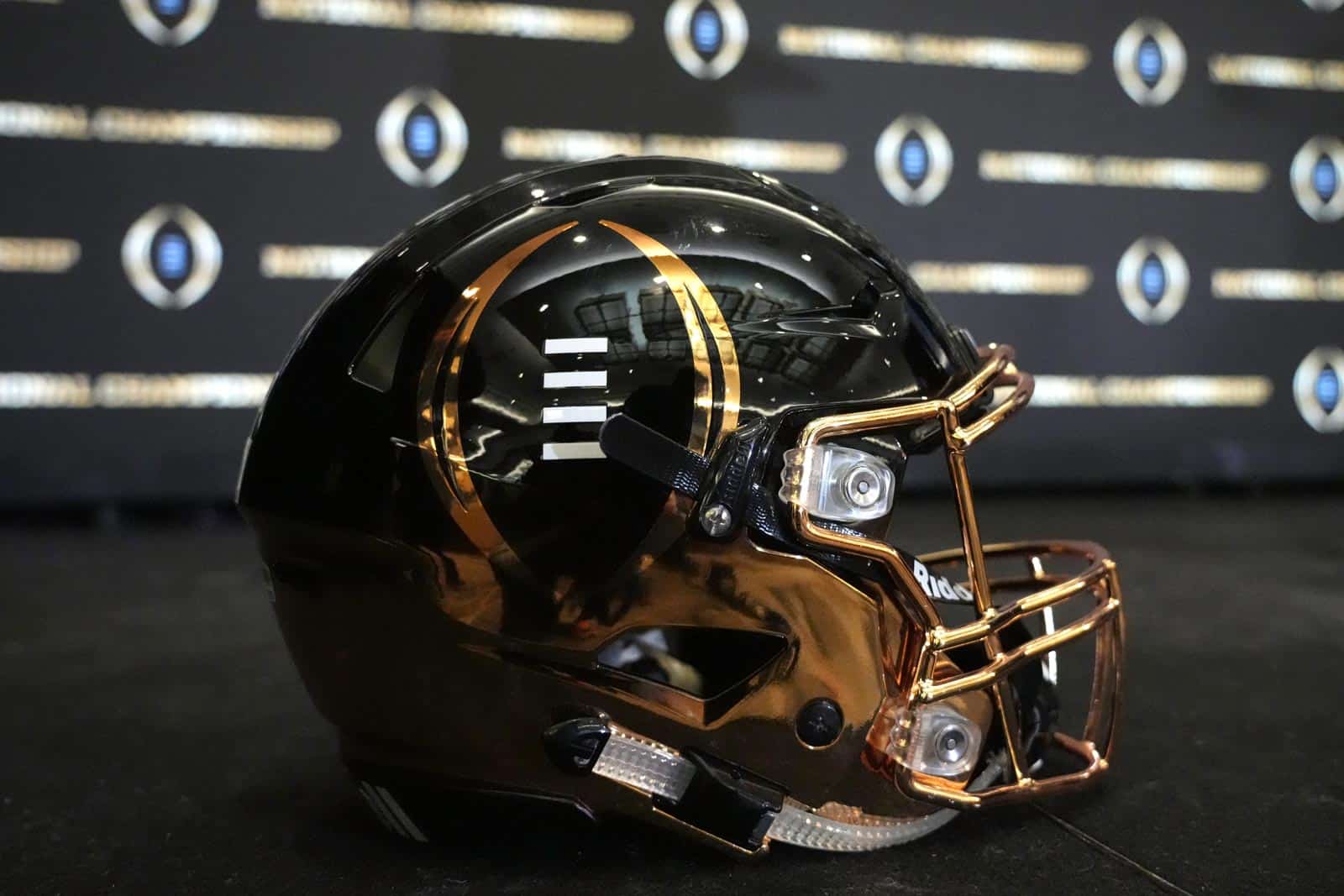 The College Football Playoff will expand from the current four-team playoff to a 12-team playoff following a vote by the Board of Managers on Friday.

The new 12-team playoff is scheduled to begin in the 2026 college football season, but there remains a possibility that the expanded playoff could begin in 2024 or 2025.

“This is an historic and exciting day for college football,” said Mark Keenum, the President of Mississippi State and the chairman of the CFP Board of Managers. “More teams, more participation and more excitement are good for our fans, alumni, and student-athletes. I’m grateful to my colleagues on the board for their thoughtful approach to this issue and for their resolve to get expansion across the goal line and for the extensive work of the Management Committee that made this decision possible.”

Below are the details of the new 12-team College Football Playoff format, which were approved by the board:

2. The ranking of the teams will continue to be done by a selection committee whose size, composition, and method of selection will remain substantially unchanged. The Management Committee will modify the selection protocol as required by the change to the playoff structure.

3. The four highest-ranked conference champions will be seeded one through four and each will receive a first-round bye.

5. The model allows for first-round games to be played on either the second or third weekend in December in a way that best accommodates the format and the participating teams, with at least 12 days between the conference championship games and the first-round games. The Management Committee would make the final determination of the calendar.

6. Subject to reaching agreement with bowls, the four quarterfinal games and two Playoff Semifinal games would be played in bowls on a rotating basis.

7. The national championship game will continue to be played at a neutral site.

8. Subject to reaching agreement with bowls, the four highest-ranked conference champions will be assigned to quarterfinals bowls on selection day in ranking order, and in consideration of current contract bowl relationships if those bowls are selected for the rotation. For example, if the Pac-12 champion were ranked #1, the Big Ten champion were ranked #3, and the Rose Bowl were a quarterfinal site, the Pac-12 champion would be assigned to the Rose Bowl and the Big Ten champion would be assigned elsewhere.

9. With the four highest-ranked champions assigned to quarterfinal games in bowls, the opponent from first-round game winners will be assigned by the selection committee based on the bracket.

10. The higher seeds would receive preferential placement in the Playoff Semifinal games.

11. First-round games will not have title or presenting sponsors and existing venue signage will remain in place. The CFP will control the video boards.

The 12-team format should be divided along the Mason-Dixon line (as defined by the US Census Bureau). The six highest-ranked teams from the following states – Alabama, Arkansas, Florida, Georgia, Kentucky, Louisiana, Maryland, Mississippi, North Carolina, Oklahoma, South Carolina, Tennessee, Texas, Virginia, and West Virginia – would be assigned to the Bowden bracket, named for former West Virginia and Florida State coach Bobby Bowden.

The six highest ranked teams from the rest of the country would be in the Osborne bracket, named for former Nebraska coach Tom Osborne.

Oh ye of little faith in the B10. Mind you, I still think the majority of national titles will be won by southern teams, but B10 teams probably will win about a quarter (so the same as in your proposal, IMO).

You’re trying to solve a problem that doesn’t exist with all of this.

Why do you think it’s a problem that a southern team wins the CFP?

It makes no sense.

How about we have a system where THE BEST teams play for the championship and one of the BEST teams wins it?

Oh, that’s right… WE ALREADY HAVE THAT.

I.M.O., Keeping the irrelevant NY6 exhibition bowl Affiliations is as outdated as the Bowl Championship Series, LLC was.

Affiliating with a weak PAC10 instead of attracting the Best available nationally ranked playoff Contender is what will make this Bowl relevant & more attractive, more exciting every New Year’s Day.

There’s an entertainment, quality of play Reason why The Fiesta Bowl, The Peach Bowl, who invite the highest ranked available @ Large Teams in Years they’re not hosting a 4 Team playoff Game, have become more enjoyable to watch.

If I’m missing another exhibition NY6 Bowl who picks an @ large Trust Five Conference Team every Year please inform me. I don’t get paid for Time spent to know every official NY6 @ large Bowl on the Calendar.

The vast majority of national titles in the two-poll era have been won by teams in the states listed in my OP. Since the formation of the BCS, Ohio State has been officially the only non-Southern school to win a national title winning the BCS in 2002 and CFP in 2014. A BCS title by USC in 2004 was vacated.

I feel if the South wants to try to continue its dominance of top-level college football, they should have to go through a non-Southern team every single time.

Again, why is it a problem that teams from the south win the national title?

Why is that a problem you feel needs to be solved?

If anything, you should be setting up a playoff that ensures we end up with two teams from the south playing for the national title.

HeyArnold, I suspect you are from the South which is why you are criticizing me. So, yeah huge conflict of interest here. I want more non-Southern teams to win titles. If you don’t like it that’s too bad.

It doesn’t matter where I am from.

Any system that gives you less than that is worthless.

If you want more non-Southern teams to win titles then the answer is not to put inferior teams in the playoff that will just get annihilated by southern teams.

If the rest of the teams can’t compete, they don’t deserve a place in the playoffs.

Z-man has an “equity” problem – some might even go as far as to call it a reality problem. Be kind to him.

There’s precedent. The NCAA has long sorted its lower-level postseason championship teams by region, and once did the same in D-I as well.

The adherence to a regional construction for NCAA national championship tournaments in the non-revenue sports EXSISTED for that very reason – they were non-REVENUE! The practice of regionalized tournaments was (and still is) conducted to minimize the size of profit loss. Once the men’s basketball tournament began to generate greater and greater profit that construct became atavistic, was abandoned and now only the geographical titles of the regions remain. (For God’s sakes, the current women’s BB tournament still loses money!)

The FBS football playoff was created within inherent wealth and therefore never needed or need to consider a regional construct constraint or path. Your regionalization idea, especially for this sport, was never a precedent.

the conferences pick their own schedule, they will pick schedules that give their teams the most chances to be in the playoff, if alabama doesnt play georgia, they can both go to the playoff and so on, they wont do this right either, just like they have been rigging it up for decades, the sec will have increasing numbers of teams in the playoff, until it is forced to expand even more, nobody cares about this, we will watch it if there is nothing else good on to watch, but we wont care about it

I think I understand your concern… but… I’m actually pretty impressed that they made it so at least 6 conference champions will get in, and the top 4 of them will get byes.

I don’t think I see conferences ditching their championship games either. Just as things are, the SEC would have had 3 teams in, which isn’t crazy.

I think that actually the format they’ve made here encourages teams to still keep a tough schedule, while allowing conferences outside of the SEC and Big 10 a chance to get in no matter what.

Will the SEC make it their goal to get 7/12 spots? Sure, but it seems like it would be tough to get more than 4 or 5 tops, and it’s easy to imagine the Big 10 taking several and at least 1 other conference getting a second team in.

Not perfect, but better than I would have expected given that money is boss.

So, how does this work for Notre Dame (and other independents)? Does Notre Dame get to take the ACC’s champion spot if they’re ranked high enough? Or do they have to be one of the 6 teams that are not conference champions (and therefor can’t get a 1st week bye… and therefor will likely have heightened leverage against them remaining independent)…?

I assume they get a spot in the 5-12 area of the bracket. It’s something I think they agreed to when it was brought up initially.

ND and other independents won’t get a first-round bye. ND was part of the group that came up with a playoff plan pretty identical bro this so they probably are OK with it.

Also, between rule 3 and rule 4, do the 6 conf champs get the top 6 slots? Or do those last 2 conf champs just fall to where ever they stand?

Last year would have looked like one of these depending on the answer (and assuming there’s no unmentioned “Notre Dame rule”):

It’s the first one. Top 4 champs are in the top 4 spots, but the other two champs can be placed anywhere.

12 teams in better than 4! However there are 3 things I am not sure than been fully thought through.

1. Only teams 5 through 8 get a home game. I would prefer my team be #5 than #4 especially If I am student unable to travel to bowl games. Last year Georgia would have been #5 seeded team as highest ranked non champion.

2. Championship game upsets, we have not had one matter in the Playoff era yet, but if a 4 loss team beats the 1 loss 2nd place team and knock them out of the playoff is a real possibility especially for ACC, PAC 12,B12 AAC and MW. Also because out of conference games do not count for conference standings that can mess with the rankings.

3. Rule 10 says higher ranked teams will preferential treatment in the Semi Final game. So if the Semi Final teams are #1, #3, #4 and #7 (who beat #2) Then 1 would play #7 and #3 would play #4. MLB does playoffs this way, but the NCAA tournaments do not. Or does placement just mean The Sugar Bowl instead of the Rose Bowl for a team from the Southeast?

Can the loser of the #6 vs #10 1st round playoff game on the 2nd weekend of December still play in a New Year’s day bowl game?

The article does not say.

I welcome the enlarged format. But I do think this will be the demise of the smaller bowl games or they will just become local events with many empty seats. As an example, the Alamo Bowl has had some of most competitive games of the post season and a high non-playoff TV ratings, but with a seating capacity of around 50k, it probably won’t be picked as a playoff venue even for the first round games? There are even smaller size bowl venues which the interest will become less with the increased number of playoff teams. IMO they will disappear or become games of local interest. The AB will host local/area teams like UT and UTSA, if they don’t make the playoff cut and with reduced TV coverage. The schools and teams in these bowls may not be interested in playing in them, as well as the fans?