“The College Football Playoff marks the beginning of a new era and we are thrilled to present this iconic new national championship trophy,” said College Football Playoff Executive Director Bill Hancock.  “This fall, thousands of athletes will lace up, with the goal of winning it all.  We look forward to seeing our champion hoist this one-of-a-kind piece of art which will represent the highest level of team achievement in college football.” 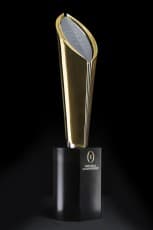 Created by the legendary international design consultancy, Pentagram, the trophy was then commissioned and handcrafted by the master fine art foundry, Polich Tallix, in Rock Tavern, New York.  Expert craftsmen at the foundry worked for three months, combining cutting edge technologies with timeless metal casting and finishing techniques to create the trophy.

“Rarely do you have the opportunity to create an identity and shape it into an iconic object that will be embedded with so much pride and meaning,” said Pentagram Partner Michael Gericke.  “We are honored to be a part of symbolizing the new era for the College Football Playoff and have it literally come to life with this magnificent trophy.”

The design of the trophy features a focused football at the center of the base that rises to form an actual-size ball.  Standing at a total height of three feet, the trophy and base are two integral, but separate pieces, so the trophy may be lifted up independently when it is awarded to the national championship team.

Handmade from 24-karat gold, bronze and stainless steel, the trophy is 26.5 inches tall and weighs 35 pounds.  The base is formed from bronze with a heat-applied and hand-rubbed black patina finish, and is 12 inches high, weighing 30 pounds.  Total weight of trophy and base is approximately 65 pounds.

For more information about the College Football Playoff National Championship Trophy presented by Dr Pepper and behind-the-scenes footage and photos of its creation, please visit www.collegefootballplayoff.com.

About the College Football Playoff
The College Football Playoff will begin with the 2014-15 season. The semifinals will match the No. 1 seed vs. No. 4, and No. 2 will face No. 3 in semifinal games that will rotate annually among the Peach Bowl, Cotton Bowl, Orange Bowl, Sugar Bowl, Rose Bowl and Fiesta Bowl. The first semifinals will be January 1, 2015, at the Rose Bowl and Sugar Bowl. The first national championship game will be January 12, 2015, at AT&T Stadium in Arlington, Texas.

Just hand it to ALABAMA right now, they win (cheat) at everything!!!

Does that mean Alabama didn’t cheat last year since Bama did not win a BCS trophy?

What boring replacement to the beautiful Waterford Crystal trophy it replaces.

Not too shabby. Would have preferred the top portion of the stainless steel football core to be semi-spherical to give it more prominence though.

A shame they won’t call it the Danny Ford trophy…..

Where’s our 16-32 playoff NCAA!? Oh wait, you guys are too incompetent of everything

Looks like the top half of a prostatic leg.
just plain and cheap.
would like to see some of the other considerations.